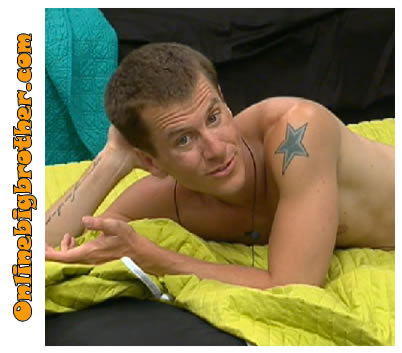 4:15pm Palm Room Matt, Ragan and Hayden talking about the competition
Ragan “at least there been alot to do the last couple days” hayden agrees. They discuss how much easier it is to cope with the game when their kept busy. Ragan “Seriously… Psychologically it makes the world of difference”
They start talking about the movie “Dazed and Confused” Both Matt and Ragan LOVE the movie but Hayden hasn’t seen it they start to replay lines from. Matt: “you got any weed would be a lot cooler if you did” Ragan “I keep getting older they keep getting younger”.. They can’t Believe that Hayden hasn’t seen it both matt and Ragan are going nuts about how awesome it is, Ragan “go watch it as soon as you get out” Enzo Joins them and they ask him if he’s seen dazed and confused. Enzo “Ya sure i have they had it on at the hotel” Ragan in the background says “get down on the ground you freshmen bitches”.. He tells them that Richard linklever directed that film.. 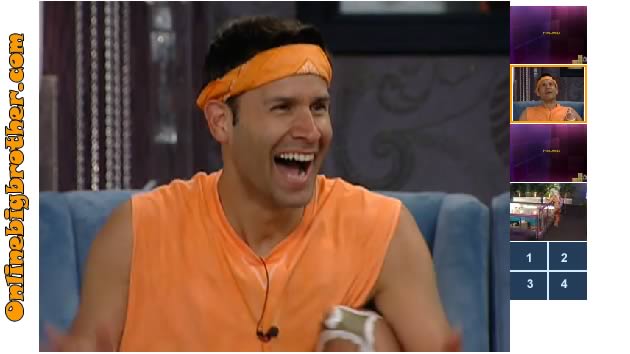 4:30pm Living Room they have just found out that Annie was El Salvatore
There all congratulating themselves for being “such good players” Andrew says that everything Annie said must of been a lie. Ragan says that there was no way that Big BRother 11 would of got the Salvatore out on the first week.
They’re all happy Matt says “Worst Twist EVER in BB history” Brit says she’s happy now that they can now just play the game. Some houseguests are starting to doubt that it’s true maybe it was Annie just fucking with them. Enzo ”
she’s either a serious player in this game for shes el Salvatore” There going over all the twists in previous Season, they think that maybe theres another twist. Enzo brings up the “Coopy ti da” Everyone is like what the fuck? Matt says ohh you mean the “coup de ette” (sp?) Enzo: “Ya the coop ti da” (LOL pissing myself right now) 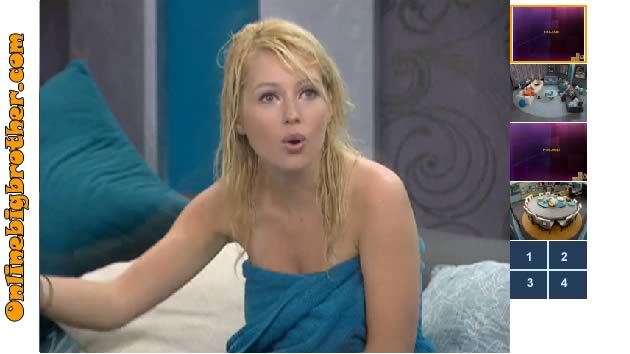 4:40pm All the houseguests are all thanking themselves about getting Annie out week one. Brit says “OMG this means everything she said is a lie like what she said about Rachel” rachel walks by and tells them “Obviously it was I would never have done those things she said”. Brit “She was desperate” Lane sits next to Brit, Sticks out his hand and says “bite it” Brit ‘No” Lane “BITE IT” Brit “No whats is it” LANE “A BLISTER…BITE IT” Brit NO! (lol too funny). Brit tells Andrew she is sorry about thinking he was El Salvatore.

Brit “CBS wants to shoot it’s faces off..” Monet: “we’re too smart” ragan comes in tells them that the hardcore fans (like us) are going to be so happy now because they dig the solid gameplay stuff. They keep going through all the times Annie did things suspicious and now they all claim they “KNEW” she was El Salvatore.

i’m glad they know, so no chance of her coming back …unless they come up with another bad twist. wonder if they will think the lifelong friends is a lie? She said it not Julie, right?

wonder how they found out about annie………. on another note……. those boys are not quoteing the movie right at all…….. lol……… on of my fav movies

If brendan is a have not, does that mean he can’t sleep in the hoh room?

my thoughts exactly. last season the have nots had to sleep in their have not bed at night. now that is some funny stuff! Good thing they opened the tequila last night. LOL

Ragan can take credit for having a clue about Annie, anyone else is just full of sh*t.

brit and lane :P so funny

So the friends in the house thing is just crap as well huh? Poor BB LOL

Well “coop de doo”. Why are they giving themselves “snaps” for evicting the saboteur? They evicted Annie because she was, well, Annie, and that’s it. Are these folks self-centered or what? By the way Monee and Cxntney, Julie asked you how many gallons of caramel were used in the first food competition, not how many gallons of cxm you could hold in your mouth at one time?

I can’t believe Hayden hasn’t seen Dazed and Confused! Great movie!
I love how they all “knew” Annie was the Saboteur – really? Maybe Big Brother should bring Annie back before Jury to WEED out the bad ones/losers! : )

I am the saboteur

they shouldnt be happy about the saboteur being gone. they should be upset. If they kept the saboteur in longer, it would have been one more player that they wouldnt have had to worry about winning.

Now that Enzo is a “have-not” this week I think it is going to send him over the edge. I think it was wednesday night, while he was talking with “Twitney”, that he eluded to “having had enough of this game.” Now if the “Twat Waffle” were trained to listen to other people’s voices instead of her own, she could use this info to get him nominated.

LOL @ them pretending they knew all along, if annie wasn’t the way she is she would never been found out and she would’ve dominated but she was crazy, and i think she was right about rachel shes a ho and ho’s do things like that

Im getting da feeeling dat enzo or kathy will eliminate their selves this weeek. Which will prolly be a wasted hoh for brachel

Are there really 2 houseguests that know eachother, or is it confirmed that Annie made that up?

During the pull of names for the first POV competition, Rachel pulled Monet’s name. As she said the name out loud, she rolled her eyes and made a face, which Monet and everyone saw.