7:15am All the houseguests are still sleeping except for Brendon who is now up in the bathroom having a shower and getting ready for the day. 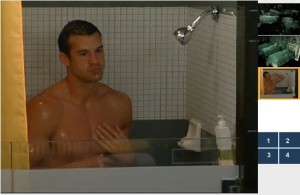 7:40am Big Brother cuts the feeds, and when they come back on, Ragan is up and outside talking to Brendon. Brendon comments that its really nice waking up early and having some peace and quite without any game talk. Brendon and Ragan laugh about things that were said last night. Brendon says that he really flipped this house upside down winning the POV. Regan says that one thing he really hates and is how quickly people switch sides and throw other people under the bus. Ragan says when people aren’t thinking logically, it scares him. Brendon says some people are acting weird around him now. Ragan says whats really interesting about this is how people balance real life and the game. Brendon and Ragan talk about Andrew and how poorly people are treating him. They both feel bad for him and how everyone is calling him weird and they said if you were constantly being talked about and made fun of, you would be weird too. Brendon says that he knows that Andrew has done some weird stuff and the things hes said and done to the girls isn’t right. Ragan says yeah especially what he did to Annie (The Pap-smear Incident) but that he really respected him for apologizing so quick. Brendon says he thinks Andrew is a nice guy that just doesn’t fit in, that hes an awkward guy that is trying to balance his religion and this game. Brendon says that he wants to keep Andrew because just because everyone wants him gone. He really doesn’t like how everyone has ganged up on him. Ragan says that some of the jokes are getting old real quick. 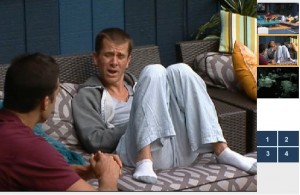 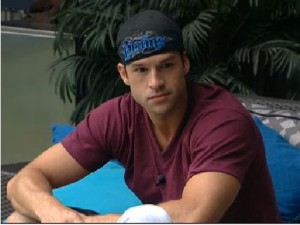 8am – 8:25am Brendon says that he has always been a fighter and was picked on because he was a nerd. He says that he will always stand up for someone who is being picked on because they’re different. Brendon starts telling a story about when he was younger and was being picked on by some kids and one day this kid got shot by his neighbor. Brendon said he never really knew what happened. Big Brother then cuts and switches the feeds to inside the house where Andrew is up and getting ready. The lights are all now on and the rest of the houseguests are getting up and ready for the day. Andrew is up on the HoH balcony doing his religious readings rituals.