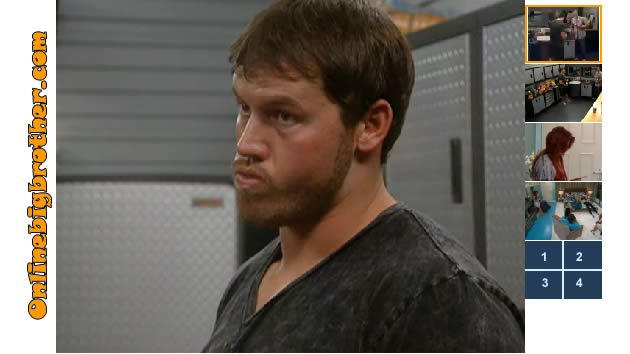 9:40pm Storage Room Enzo and Lane confirming that the brigade is still good. 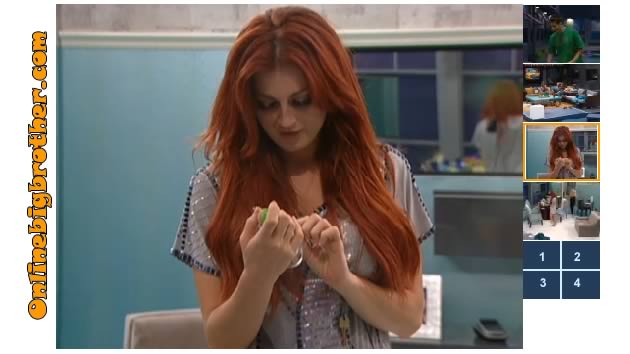 9:50pm HOH Kathy and Rachel Rachel is still going on about not haveing her stuffed rotti. Kahty points out how Monet and brit are starting to act fake she thinks you’ll start seeing more houseguests like being like that. Rachel tells kathy not to worry she will not put her up even as a pawn. She goes on and says that Monet and Brit would of put her and Brendon up if they had won the comp so she wouldn’t feel bad for putting them up.Rachel has no idea why the former have nots can’t sped the night int he HOH, Kathy thinks they should be able but she thanks Rachel for offering up the room. kathy goes on and on about how proud she is of Rachel. Rachel keeps saying how wonderful Brendon is “he’s the most wonderful person I have ever met” She brings up helping the fight for cancer and how she has this website beign set up were young artist liker herself but donate their works (she’s fucked), “People meet me and they don’t think i do much charity work but I do. ” Kathy says she was touched by Brendon’s story about working on cancer. 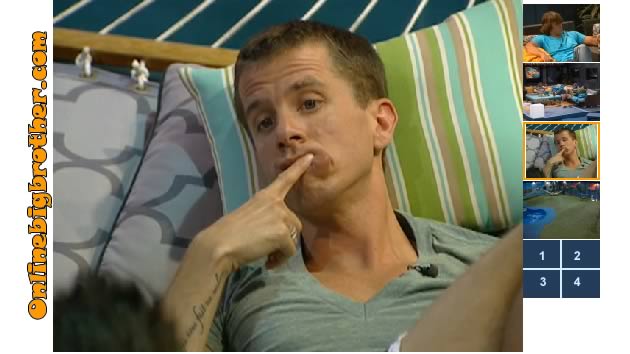 10:00pm Hammock Ragan and MattMatt is Telling ragan about his el Salvatore theories, He’s really pinning it on Brit and Andrew. He goes through all the evidence he knows. He says brit picked the best bed to be able to sneak out, she “fell” and hurt her knee but the next day she was fine, and Britney told Annie Hayden nominations .. Matt adds that he knew Brendon’s real job from before so he knows he can trust him. Ragan says that to know someone in the house that you can trust is the most valuable thing one can have. Matt says that Andrew is coming after him and he’s not sure if Andrew is aligned with Brendon and rachel. 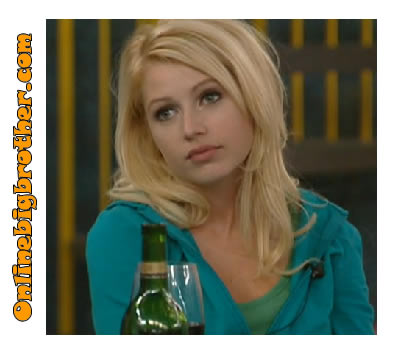 Enzo’s telling them he’s glad that the nominations are tomorrow so they don’t spend 1/2 the week waiting around he hates waiting. Brit tells him not to worry Monet and her are going up. Enzo “NAh” Brit: “Yes they want use out”. she explains that they were the last 2 in the HOH comp. Britney pints out about Rachels letter saying she moved to Vegas to be a chemist? Brit “I thought she said bartender to us” They talk about the “Showmance” and how Brendon and her might get frisky tonight. Monet decides to head up to HOH.. brit follows.

10:20pm HOH Brit, Kanty, Rachel and Monet Chit chat… trying to be nice to each other. Cathy won’t stop saying how Awesome listening to music is. Brendon comes in and brit/Monet tell Rachel they’ll leave so they can get frisky together. Brit says build a tent! Monet “Eww gross Lydia did that last year and it was lame”..

10:38pm HOH Brendon and Rachel Drinking their tequila… They start talking about how awesome they are rachel says “There nothing you can do that can screw this up especially since I won HOH and you won POV we’re the power couple.. no season of BB has had a couple like us”

2 shots of Patron and Rachel is already professing her love.. it’s only been 13 days! Damn Patron!!!

I can’t stop vomiting. Are you listening to that effing pussy Brendon on Showtime!?!?!? He sounds like a 10th grader with his first boner. Dude, man up and quit kissing that “truck stop treat’s” ass. He probably still believes in Santa if he thinks this shit’s for real. This is freakin’ nauseating (but I can’t stop watching). Seriously, he is playing right into her hands. Pathetic.

Honestly, I think that he is more into men then women. He definitely doesn’t kiss like he’s enjoying it. A real man would be all over it! :)

God she’s a moron. Does she even qualify as a human being? She’s so brain dead I doubt she’s legally alive.

after watching bb after dark do people still like brendan and roach-face? i think her true colors are coming thru. she is soooo not hot. all the things that make her look hot were bought. the hair extentions, the hair color, the boobs, the eyelashes and of course every girl ears makeup… any guy in the house who wore all that ould look just as hot or hotter…she’s just another ugly ass drag queen!

p.s. sorry for the typeos (if that is even how you spell that!) also doesn’t her mouth look like homer simpson when he burps??… just an observation.

I can’t believe Monet was bashing Kristen saying that she burps and farts when I distinctly remember Monet farting while she was changing in the shower! Hypocrite! Kristen is cute as a kitten and can hang with the guys as well as the girls. Britney is evil but hilarious at times. All the girls ( except Kathy) are nice looking so I wish they would stop trying to rip on each other for their looks. It’s just coming off as jealousy. I also think there are more than one pair of friends like Enzo & matt. Hayden & Kristen, Rachel & Brit , Andrew & Brenden etc,,,

I’m telling you……..Hayden and Kristen are the lifelong friends, very sure they are twins….think about it, the way I interpret lifelong has to be from birth…….I see resemblances in their eyes, mouths, other facial features

But are siblings, friends?

…and how did Annie know, anyway?

Twins generally are better than friends….unless there’s an evil one in the batch! lol

A. Stounding
Reply to  Uncle Cool

who said lifelong friends first? Annie or Julie/BB??
If Annie, then maybe a lie? but at least that is a better twist the the SAB was

Brendon seem like he has never been with a girl in his life!

Could the server “servicers” adjust the time to west coast time to be in synch with BB house?

The gullible posters here aren’t working very hard to try and figure things out. Many here are STILL talking about an alleged “life-long relationship” in the house. Mother/Daughter…Brother/Sister…blah, blah, blah, blah, blah.

Fact is….there isn’t one. There never was. It was only a ruse used by Annie as the Saboteur trying to shake things up in the BB house (and obviously, forums like this one). Think about it. The ONLY ones that heard any of this Saboteur ploy was those who watch the feeds (and, of course, the houseguests). Big Brother aired nothing about this alleged relationship on the show. They didn’t show the Saboteur announcement, nor did they show any of the houseguests talking or brainstorming about it. Nothing at all. That’s your biggest clue, right there.

If it was true (which Annie couldn’t have known anyhow), BB Production would have aired ALL that juice on the show. If it was true, BB would want all the viewers to know about it and have ALL of us guessing. They’re certainly not going to do a “expect the unexpected” announcement about this so-called relationship in any future weeks because the shock value would be completely non-existent with the houseguests. None at all. That’s not how these productions work.

Give it up about the alleged relationship. You’re STILL being played by Annie and you’re not even in the house. LOL.

You make a really good case. Plus you were right about Annie being El Salvatore. But since CBS allowed Annie to say there’s one more trick left, maybe on Sun when they announce she’s El Sal, they will also announce the lifelong friends/connection to past BB twist. If nothing is said on Sunday, thenthat’s the proof it was just a failed attempt at wrecking havoc by the lame-o Salvatore.

Right on Lurker! The saboteur’s role was to sabotage the houseguest’s right??!!? So why trust in ANYTHING that Annie said or did from day one? It’s obvious that Annie caught onto the fact that Britney and Kathy somewhat resemble each other. That’s why she she put the tape over their faces. Also, you have to remember that BB was helping the saboteur out. Yes Hayden and Kristen resemble each other too but so what?? From where I stand, my favorites in the house are Brendon,Rachel,Ragan, and Andrew… All the other houseguests are shady in my opinion. To tell the truth, I didn’t like Annie from day one but I’ll admit I didn’t think she was the saboteur…(glad she’s gone) I thought the saboteur was either Lane, Matt, or Monet. Just remember that everything that Annie did and said in the house was a lie and everything will start to make more sense. And she wasn’t Brendon and Rachel’s friend either…she was threatened by them more than any of the others in the house. I’m glad everything back-fired in her face though. BB is gonna expose Annie as the saboteur to the houseguest’s on Sunday. Anyway, I was overjoyed when Annie went home…I hope that the next to go home will be anybody from the ‘brigade’…They all make me sick!!!

T that's Me
Reply to  Lurker

Actually the did show that message on the show on Wednesday night! So there is still something to it!

I am so sick of Rachel! I think she’s completely faking her “chemistry” knowledge. She has not said ONE intelligent thing and seems to only know the word “chemistry” b/c it’s always “chemistry this” and “chemistry that”. Ohhhhh….”I LOVE chemistry”. Really? Doubtful. IF she loved it that MUCH she wouldn’t be working as a cocktail waitress in Las Vegas! So sick of her! And Brendon…omg…he is so dumb for someone who is supposed to be so intelligent. I truly dislike this “couple” and am looking forward to them being booted off the show by the other HGs!

i too think brenden is gay. when he kisses rachael it seems he really not into it. he was way to anxious to join houseguest downstairs instead of doing the nasty with red. not normal

Can you blame him? Rachel is sooo homely. When she smiles or tries to make a cute faces, she looks cross-eyed and her lips curl like a rabid squirrel.