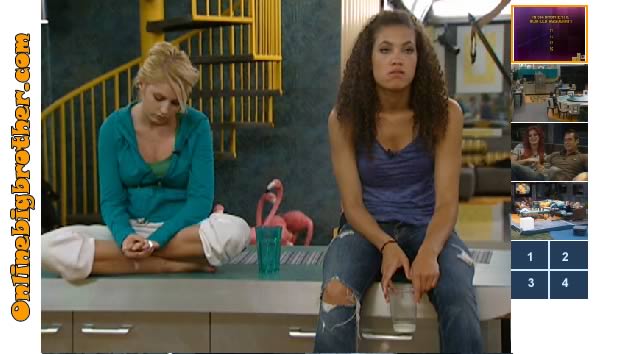 8:20pm Kitchen Brit and Monet Brit is telling her how the whole blow up on Andrew worked out in her favor because she didn’t have to say worry for being rude. Monet still pissed about fucking up the HOH she says that her first guess was right and she would of won but instead she second guessed herself and failed big time. Brit 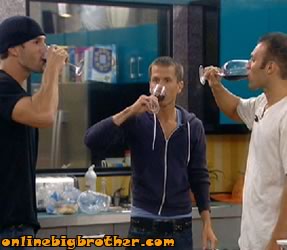 explains that it was the exact opposite for her. the second guess she had would of won but she decided to stick with her first. Monet now is regretting that they kept Rachel and Brendon in the game… Brit tells her they need to make up plans if their backs are against the walls. She suggests they say that Andrew told them he was in an alliance with Brendon and Rachel. Monet agrees, She says that they should of kept Annie at least she was truthful. Brit says that there’s still the saboteur.. she heard Matt is it.. Monet says she did to. Lane walks by and says he’s going to go get some votes, he steps outside.. Monet says “GAWD I hate Rachel and Kristen” Brit points our there is only 2 people in the house not freaking out and that’s Hayden an Kristen.. she explains that Hayden made a deal with them so that Rachel was safe. Monet points out how Rachel is dressing with her butt hanging out and her fake tits dangling around, neither of them thin it looks good. Britney says she’s pissed that Hayden made deals on both side so he didn’t have to worry this week. Lane walks in, “biam i got 3 votes right there” Monet: “That was quick” Brit says again how much she hates Kristen and Rachel’s Fake BFF thing they got going on. She brings up Kristen walking around the house thinking she hot. Monet “She’s totally not” Monet “Whats disgusting is she burps and farts umm like WHY does that make yo look cool?” Matt joins them tells them there in trouble it’s just them. They tell Matt that Hayden struck a deal to keep himself safe this week. Matt says for sure he did thats the only way to go early on. the girls mentioned that Annie should of been kept. They agree the only positive thing they got going right now is that Rachel isn’t making the decisions it’ll be Brendon. 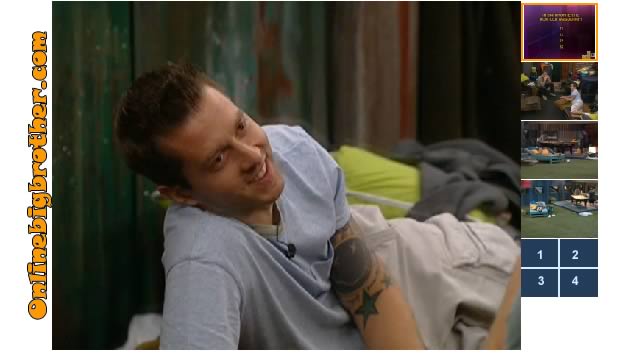 8:40pm -9:15pm Have nots room, Matt and Ragan MAtt is expressing his concerns that he is going to be the target this week. Ragan assures him that Rachel will most likely put another houseguest up. Matt asks how does he now that. Ragan says if Brendon or Andrew had won he would of expected Matt to go up but with Rachel he believes he’s safe. He’s never heard Rachel say anything negative about Matt. Matt explains that he’s worried because he thinks that Brendon will influence what Rachel is doing and therefore put his ass up. Matt says he has a feeling it’ll be him and Monet that go up. Monet enters and asks them about how they like the beds in the have nots , they complain about how bad it is. They start talking about next weeks HOH comp and how its going to be endurance. Ragan thinks that this year they have some of the strongest competitors and he’s looking forward to some of the harder competitions. Matt brings up the saboteur message tomorrow. Ragan says he thought it was going to be Annie. 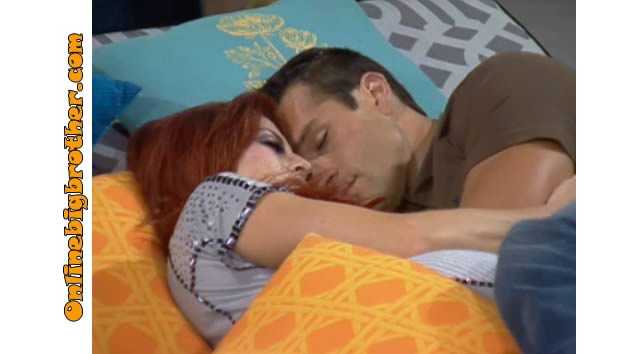 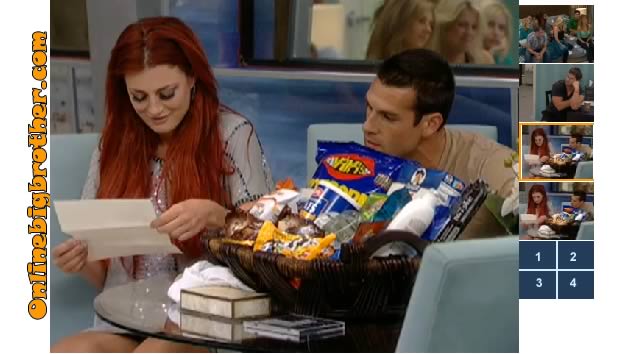 9:27pm HOH her letter says she so brave because she moved to Nevada at a young age to get a chemistry job. She gets Tequila.

Soooo after watching as much After Dark as I could stomach with Rachel’s annoying laugh – I have to wonder if there isn’t more between Kathy & Rachel – an aunt/niece connection perhaps??
There just seemed a few undertones as they talked by themselves for a long time in the HOH room. and when the cameras showed the pic of Rachel’s Mom it made me look a little more.
Maybe this unsuccessful saboteur thing CBS did has us all a little paranoid.

I’m not surprised that Annie was the sab. I’m glad Rachel won HOH… I hope she puts up Monet and Kristen and I hope Kristen goes home. I honestly forgot about Kristen in the house. I forgot about her completely.
Simon or Dawg, what’s the picture of the guy with the hat where the houseguests are?

u must mean Monet & Brit because Kristin is a friend of Rachel’s in the house.

I think that picture of the guy in the hat looks like Michael Jackson.

God, another week of that unbearable idiot, Rachel. I don’t know if I can stomach this.

After watching Jordan for 10 weeks, I can stomach anything!

At least Jordan was nice to look at, unlike the alien that calls itself Rachel.

I know. Up until they betrayed Russell, Jordan was a pretty cool girl. I could root for her, I will never be able to root for Rachel. Jordan was cute dumb, Rachel is ‘stab my eyes out you’ve got to be brain dead’ dumb.

Just a quick hint that’ll make thus place a little better.
It isn’t “would of” or “should of” or “could of” but rather “would’ve”, “could’ve” and “should’ve!”
Does nobody remember English 101?
Otherwise, Rachel and Brandon are royal pains in the ass and Rachel’s fake laugh is extremely annoying. I wish Annie had the votes, would’ve been much more interesting.
Am hoping Andrew gets the boot this week and then either Hayden or Kristen win HoH next week.

OH TK! If you’re going be the grammar police, you should check your own posts before hitting submit.

in his/her defense, would of, should of… is kind of annoying since it’s would have, should have.

On another topic for a sec, I’m confused about the Have Nots…. did BB have a competition that they didn’t show (or that they are going to show us on Sunday, but in reality it ends on Monday)? Who are the Have Nots?

Rachel should put up 2 of the Brigade and get one out now, unfortunately she’ll get rid of another woman because she seems the type to want to be the last woman standing. I cracked up when she said Brendon was her man. She’s clueless as to how this game will go, and crazy to think Brendon won’t kick her out to save himself.

But Rachel winning HOH serves the HG’s right for kicking out Annie, Annie warned them.

she warned them- I do not believe they even listened to anything she said.. I think Brendon really liked Annie- playing both women- one for yum yum and the other game

I think the have nots are the ones who come in last in the challenge..

what does it mean- Your comment is awaiting moderation?

it means either dawg or myself needs to approve it to be displayed on the site. This is to prevent the spam.. sometimes we miss a few.