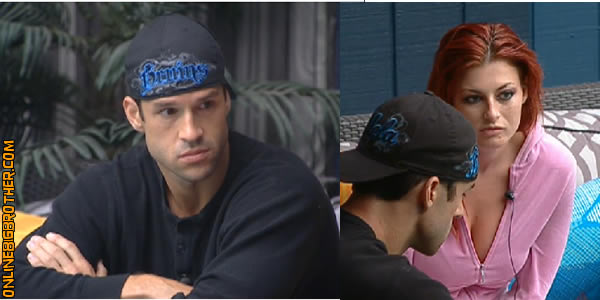 
8am Brendon and Rachel are the only houseguests awake. They are out on the backyard couch talking about the game and their strategy. Rachel says its that its so important they win HOH this week. Brendon says I Know. Brendon asks if Rachel thinks he should talk to Ragan. Rachel says yes. Brendon says he doesn’t think Ragan or Hayden will go back on their word but that Kristen is hard to read. Brendon says that Kristen has been acting very weird with Rachel lately. Last week Kristen told Rachel that they have to get out Britney and Kathy, but now she’s being really friendly with Kathy. Brendon says that Enzo is a lot stronger than he’s makes himself out to be. Brendon says that they need to be careful with him. Rachel says everyone is capable of back stabbing them. Brendon says he doesn’t get a good feeling from Britney. Rachel says she never trusted her. Rachel says she’s shocked by what Matt did. Rachel says that she thinks after week 5 everyone will turn on each other and that hopefully the target will be off their backs. Brendon tell Rachel that he is going to continue hanging out with Enzo and he is going to keep reinforcing to Enzo how shity it is to be a have not two weeks in row and that they should be getting angry at them for dropping early. Brendon says that it’s not manipulating them but it is reinforcing how Enzo should be feeling anyways. Rachel says that they should keep asking Lane and Hayden to cook for them and talk about food a lot to keep getting Enzo mad. Rachel says that she will keep asking them to make taco’s and stuff for her and then not even eat it. Rachel tells Brendon that they have to focus on the HOH competitions more. She says that if Andrew stays, then her, Brendon, Andrew, and Ragan will be playing in the HOH so they should have a good chance of winning.