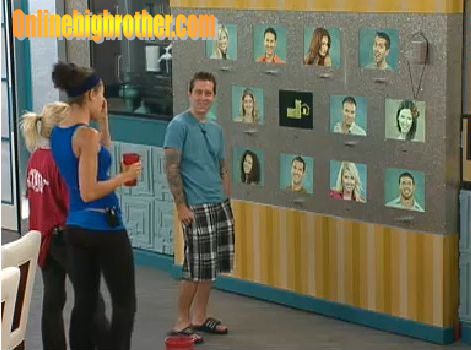 6:10pm Brendon and Rachel are laying in the hammock together talking about the her conversation with Monet. Brendon says that it is her decision, that she has the power this week and no matter what she decides he will stick support her.  Rachel says that she is worried about how things will play out in the coming weeks. Brendon says that things change day to day in the house. Rachel explains that she is concerned that they don’t know who has their backs and who is on Britney and Monet side.  They agree that they need names too be sure of how things will play out in their favour. Rachel wonders whos side Enzo is on and wants Brendon to talk to him.  Brendon suggests they talk to him together to find out where he stands.  Brendon is really concerned that Britney and Monet are going to play Rachel and that she needs to be careful.

Rachel and Britney are in the kitchen talking about slop and the fruit cake.  Britney tells Rachel that she is making ice cream with the protein shakes.  Kathy, Matt and Monet join them in the kitchen.  Matt says he wishes they would black out Annie’s picture on the memory wall.  Britney says she wants to facebook Annie and ask her if they made her do those stupid pranks or if she got to pick them.

7:20pm Up in the HOH Matt tells Rachel that he will be the pawn, that she can put him up as the replacement nominee to get Monet out of the house. Rachel tells him he needs to think this thing through and tells him that he really doesn’t want to be on the block. Rachel says that she thinks it will be a 9-0 vote for him to stay but she is also afraid that Monet and Britney will campaign for Matt to go. Matt says that it is best for him to go up but that he wants protection in the future. Matt tells Rachel that he wants her to tell everyone at POV ceremony that it is clear he is only a pawn and that she wants Monet out of the house. Matt says he is going to act all surprised that he was nominated. Rachel says that she thinks its risky but Brendon and Matt tell her it’s for the best. Matt says that he wants to talk to the others tonight to make sure he has enough votes. Matt says that he will tell them if has has the votes tonight or tomorrow morning. Matt says that he thinks his wife is probably screaming at the computer to shut up, don’t do it. Brendon asks Ragan what he thinks. Ragan thinks pawns early in the game are dangerous. Matt tells Brendon and Rachel that people will coming up to HOH and throw him under the bus. He tells them that whatever they say should go in one ear and out the other. Rachel and Brendon they won’t listen that he doesn’t need to worry.

7:40pm – 8pmMatt runs around the house and tells Hayden and Lane that he has volunteered to be the pawn.  Matt tells them that this should solidify his dedication to the Brigade. Lane and Hayden guarantee that he will stay.  They tell him that they will talk to Enzo. Matt thinks he has five votes for sure Hayden, Lane, Enzo, Brendon, and Kristen. Matt then goes to talk to Enzo. Matt tells Enzo all about his master plan. But Enzo is worried about Matt going up. Matt says that if Andrew went up, it would expose the Brigade because they would vote together and go against Brendon and Rachel. Enzo isnt convinced. Enzo says that if Andrew went up and got voted out, it would be the whole house against Brendon and Rachel, and not a house split. Matt says no, that they would have Ragan, Kathy, and Brendon votes fore sure, and maybe more. Matt thinks it will be fine. Enzo says that he would rather have Andrew go up and go home and keep Monet. Matt says that he doesn’t want to expose the Brigade this early in the game. Matt says he has until tomorrow to tell them for sure if he will go up as the pawn.

Matt is an idiot

kicks pete in the ass just because

OH NOES!! rachel finally figures out that no matter who goes home the whole house will be after her and her dweeb, and shes upset LMFAO

Doing this will secure the brigade alliances and brenchel alliances….and matt surely have at leas 5 votes..bye bye monet u did win $10,000

Love reading all this stuff, it help’s when your-up all night with a heart-burn so bad you can catch a house on ” FIRE ” if you open your mouth. Wow, this was a bad one too. Going to back to bed after being up 3-hours. Night Friend’s. The old lady.

Both rachel and brendon know they can’t put andy up. For one, he’s not coming after them. Two, he’s another target for the rest of the house.

Remember, the pawn, if possible, should always be someone that you don’t care if they stay or go.

Those persons in brachel’s eyes have to be enzo, matt, and lane (who in my opinion is set up perfectly in the middle, lane has the most options, even if he gets nominated, and all the houseguests should see this, but we know how that goes)

So those are there choices period, they have no other options.

Enzo understandably wants to control the game, but you can’t do that straightforward, sometimes you have to backseat drive.

Sometimes when really bright people are ‘book smart’, they can lack common sense! Maybe that is his problem??

Matt will have 3 guaranteed votes from the Brigade (Hayden, Lane, Enzo)