9:50am Enzo comes back up to the HOH to talk to Rachel. They talk about how glad they are that Annie is gone. Enzo talks about how Julie Chen had to cut off Annie’s speech. Enzo says its the first week why are you talking about so much. They have a short conversation about putting up Monet and Britney.

10:25am Kathy is next up in the HOH to talk to Rachel. Rachel says that I really respect you and your game. Kathy asks Rachel who she wants out, that she wont tell anyone …people have been asking but she wont tell anyone anything. Rachel says that she really wants Monet out of the house. Rachel says that she just talked to Britney and says that she didn’t tell her who she wants up because she doesn’t trust Britney. Rachel says that she isn’t sure that she even wants to put up Britney right now … that there is someone else that she thinks she might put up with Monet. Rachel says dont worry its not you. Rachel says that she likes Britney but that she doesn’t trust her. Kathy says that Britney is a dangerous person. Rachel asks who Kathy thinks should go home. Kathy says Monet did win the $10,000 not that she went after it but that she does have it and she is a strong competitor. Both Kathy and Rachel feel bad for Andrew. Kathy thinks its because he is older ..its harder for him to fit in and has been brought up in a different culture than the rest of the. They discuss how Andrew would give an honest jury vote. Kathy says and that is exactly how I would do it too. Rachel is afraid that if she puts up Britney she will be pissed if she goes up and stays …that she will definitely be coming after her then. They talk about Annie and her speech and how it was the perfect time to get her out. Kathy says you and Brendon didn’t get frisky last night did you?! …lol Rachel says no… 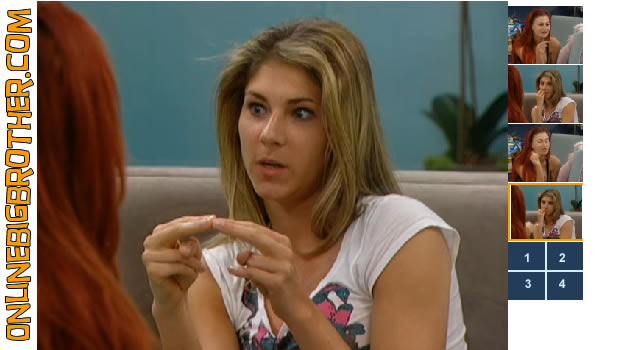 Brendon comes in and asks if Kristen and her are taking a shower together.  Rachel says yeah.  Kristen says that they were talking about getting frisky with Brendon.  They all laugh.  They are all now whispering about all the conversations that Rachel had.  Kristen leaves and Rachel tells her to send up Matt.  Rachel explains to Brendon that Matt wanted to talk to the both of them … Brendon say no, no …this is all you …you are the one with the power.  Rachel says but he wanted to talk to the both of us and tell us something.  Brendon says no ..I dont want to ..this is all you. 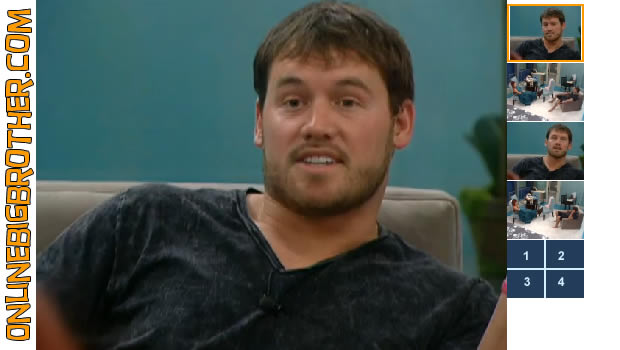 11am Lane comes in to the HOH next.  Lane says that he doesn’t like keeping people in the house that don’t compete.  He says that Annie just gave up and he didn’t like that.  Lane says that I am not the dumbest kid on the block.  Lane says hes not going to ask about who she wants up …but that he just wanted to talk to her.  Lane asks her how she liked it being up here in the HOH.  Rachel likes it and is happy to spend time with Brendon.  Rachel starts going off about how Big Brother 12 should be the season where the final 7 are the top competitors.  Rachel goes on and on about how she knows theres one person in the house that will keep going after her and Brendon week after week.  Lane says that he is just going to continue being himself and continue to joke around.  Rachel says that both her and Brendon don’t have any intention of going after Lane.  Lane says that Rachel and Brendon are safe in his books… Lane says he doesnt want to take up much of her time and leaves…

11:10am – 11:20am Monet comes into the HOH room.  Rachel says that there are obviously a few people that she wants to put up and that Monet is one of those people that she is considering.   Rachel and Monet talk about how this season they really should get all the floaters.  The feeds keep cutting out to the we will be right back screen.  When they come back, Rachel tells Monet that she just wanted to be honest with her and let her know she might be going up on the block.  Monet says I know, I know.  Then the feeds cut out again….

I hope that Rachel gets Britney OUT! She is a mean-spirited person and wasn’t even the Saboteur! I think Kristen is playing a good game – she is laying low and not getting mixed up in the drama too early, which will help her in the next few weeks!

I agree as well BB. Kristin is going to go far because she is not doing much or making many moves unless of course the allaiances get down to serious game play but by not voting out Rachel, it’s obvious they don’t.

That is true! Best thing she is doing is not involving herself in the drama so that she doesn’t appear as a threat when nominations come up! I think she may have what it takes to make it to the final 2. (Physical and Mental)

It’s going to be exciting to see.

Hey fellow BB fans, I just got back from a camping trip and have finally caught up w/ all the missed shows and BBAD. WOW a 2 day BB athon so far I really think these people are boring, however I do like Matt. I don’t know if it is just me or what but I have a gut reaction to Racheal I really dislike her . Her laugh is so annoying , I think she will be my Gnat this season someone who just gets on my nerves…P.S Annie ? my husband called it

shhhhhhhhh jimik, I’m afraid they’ll kill off Lorena and I love that crazy lesbian. haha I have to wait 2 days for a new ep and I’m like Lindsey Lohan on meth. Shhhhhhhhhh

Lorena is an important plot twist for this season. I know it is headed for an all out throwdown between her and “Stacks.” I have a feeling Sookie is going to now get a dose of werewolf blood. This will give her the strength to smack that Lorena bitch back into her mama’s womb.

rockstar lol, i also can’t wait for the next ep of true blood you and jimik60 have great taste in tv shows also one of my favs. i don’t know if you read the books but if the show follows the story line of the book poor lorena will be dead and gone….

This one on one in the hoh is really exposing some folks. They need 2 keep Andrew on their trusted team. I guess this week we will c who Hayden is rolling wit. The brigade boys or brachel and kristen

i hope rachel gets rid of monet, and i hope britney stays (because she’s hot). but out of anyone i hope matt stays the most because he’s the funniest

Annie just confirmed on fancast that none of the hgs knew each other before bb12. It was another lie by the sab just like the one about “escaping the block this week.”

I think this season is bad to be honest. Big Brother should’ve made this season another all stars. The houseguests are too predictable after twelve seasons.

Seems to me like Brendon may be playing Rachel a little bit….he doesnt really want to be arround when Rach is meeting with people…he says no no this is all you…I have watched only bb11 and this season but i’ve never seen the HOH conduct interviews kinda like Rachel is…send someone else up.. a litlle cocky to me.

ha ha! Would be fun if previous players (like pig pen) would comment here, but I guess we’d never know if it was an “imposternator.”

was there a previous player named pig pen….gnat was called pig pen right? i think i may have stole this name pig pen from you…i just loved your commentary last time. thats why im back.

I think he is too but just think about it. The guys fell into an alliance right away just like he did with his alliance and showmance with Rachel. He’s pulling a Jeff because everyone who goes there wants money and to be famous. Nothing wrong with that at all. He needs Rachel just like Jeff needed Jordon to be his backup. It’s perfect. If it worked once, it just might work again plus, not only does he have an alliance he has a girl to play with it. It’s win win.

Hmmm … just wondering how CBS will ramp up the excitement since the saboteur got ditched right out of the gates. Obviously not a great idea from the start, or a poor choice of player. And will the other house guests be told it was Annie, or will they just let the idea float??
And these Brigade dudes … don’t the ‘musclehead’ alliances go up in smoke because of their huge egos. Hayden is a prime example – he seemed completely unable to make firm decisions on his own and comments by others would really rattle him.

You know jeff is one of my friends cousins and he and Jordan are still together! So I don’t think he was just using Jordan for the game.