9am Big Brother wakes up the houseguests for the day. Everyone is up and getting ready for the day. Britney, Lane and Monet are on the backyard couches talking. Britney says that she dressed right and didn’t get cold last night in the have not room. Lane says that it smells like wine outside. Britney says that it smells like wine fart. Britney asks Lane if he is looking forward to going back to his regular gym. Britney says she is looking forward to going to her regular gym. Britney says that it is really tough that they don’t have a tanning bed in the Big Brother house. Britney and Monet talk about how Kathy has mood swings. Britney says that Kathy is a strange little creature. Monet says that Kathy is fake, how she is now trying to be all nice to her now even though she was rude to them last night after the HOH pow-wow. Andrew joins them on the backyard couches. The girls stop talking about Kathy. Andrew goes to work out on elliptical. Britney, Monet and Lane talk about guns. Britney wants to buy a pistol but it needs to be a revolver but she can’t cock the thing. Britney says that wants to make sure the gun she buys can kill the person she uses it on. Lane asking her if she wants that on her conscience. Britney says Yeah, if someone is going to come in and rob her she is shooting to kill because they are taking her goods. Lane is tells Brit she shouldn’t own a gun. Britney says she is a sharp shooter. Lane asked her what kind of gun she had and Britney says she doesn’t know. Britney says she just knows it was scary looking and really long. Lane tries to figure out what kind of gun it was. Britney talks about how she shot a can off a tree stump from a long way away, like 50 yards. Lane said do you even know what 50 yards is? Britney says that she does because she watches football.

10:10am Rachel and Brendon are up in the HOH room bed. Brendon tells how Rachel that she was in such hysteria last night. Rachel says she just didn’t know what to say to everyone last night. Brendon tells that if she doesn’t know what she is going to do, either Andrew or Matt on block then she just shouldn’t say anything or tell people she hasn’t decided yet. They start making out. Brendon says that Rachel is sexy. Rachel bites his tongue. Brendon get sup and asked Rachel if she sees any nose hairs. She says no. Brendon complains about his back hurting and needing to be cracked. He asks Rachel to walk on his back. Rachel walks on Brendon’s back. Rachel tells him that she isn’t as light as those little Asian masseuses. Rachel tells Brendon she wants to get under the covers.

10:30am They are back to kissing and making out really heavy. There is lots of heavy breathing and juggling. Rachel is groaning and laughing. You can see a hand movement back and forth….there is lots of moaning and heavy breathing. They are telling each other how sexy they are. Rachel’s head pops up out of the covers to get air. Rachel says that people are probably thinking we are getting frisky. Brendon says no they won’t. Rachel asks really? ..that’s what I would think, my parents watch this show. Rachel popped her head out and stared right into the camera and asked what is so interesting, and then goes back under covers. Back to just making out. Rachel says that she has been sexually frustrated for the last month. Brendon says don’t you worry about that. They go back to making out. Rachel gets called to the diary room. They stop making out. Brendon says that she can talk about it in the diary room. 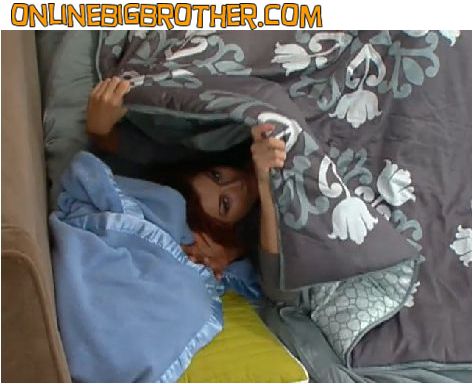 Ugh! Brendon and Rachel make me ill. Wait until they get out of the house and see what people really thought of them. I tape BBAD just so I can fast forward through them.

she says the same thing 500 times no matter what the other person says back to her. It is literally impossible to watch

I don’t think anything bad of them so sorry all of america isn’t in the same boat as you. I tend to go for the underdog though so maybe that’s why I like them. She’s smarter then people think and I like that. She reminds me of Laura from last season. Sadly she was gone way too early. She could have won that

OMG Rachel and Brendon are so gross! I hated Jeff and Jordan but dang, I would take them over these guys. Is it wrong to want to bring back someone from last year to mess with the people? Did CBS purposely pick the lamest people ever because last year was so exciting? Someone please go into the house and cause drama.

This whole Rachel/Brendon thing is nauseating. Read there was some heavy “sexy sexy” time with Hayden and Kristen.. that showmance I can tolerate. But enough will all this BS love.. let’s get the game going. I think Rachel is going to put Matt up. She’s been playing a lot of mind games – who knows.

oh its definitely matt who is going up….but sadly they will vote out monet in what may be one of the dumbest decisions of the season….

I would get rid of matt….no question

it’s a very small chance matt is going up but i highly doubt it i know delusional people like rachel who repeat themselves constantly trying to sound smart, whatever they repeated the most thats what they do, andrew is going up and home she’s not gonna listen to brendon, kristen and ragan the only rational players on her team.

room
Reply to  ILL WILL

it looked like she wouldnt, but cathy and co last night got her to stick with putting up matt….its just down to whether or not she calls him out big time, or in a smaller way….

at least I would hope

otherwise their entire side is pretty screwed

I agree Will. I want Rachel side to be screwed.Both of the shomance is boring. Its bad enough this season is.

I am beginning to seriously wonder if Brendon has ever seen a real live girl before, or has come in close contact with one. He sounds like Andy in the 40 Year Old Virgin.

Her boobs are probably filled with sand.

the constant talking and baby kisses he gives her uggh i cant stand to watch them. at least jeff and jordan where somewhat leaving our minds thinking. these 2 are boyfriend girlfriend in 2 days.wtf.

There is nothing wrong with you enjoying them. And, I think it is great you spoke up. I don’t care for the smacking in the mic but I don’t like when they all eat with their mics on. It is like they are all eating with their mouths open. Bugs me.

I agree the chomping noises are bad, but the slurping sounds like my sump pump sucking a dry hole!!

I think the dehydrated tequila queen has the most annoying laugh I have ever heard, it literally makes me nauseus!!!

Rachel laughs after every sentence she says. No matter what it is. Even if there is no reason for it. “Look at those curtains over there, he he he” (mimicking annoying laugh), “I like the color pink, he he he, have you seen any good movies lately? he he he, my dog’s name is Freckles, he he he.” I want to reach into the TV and strangle her.