8:58pm -10:00pm HOH Brit and rachel Brit says she has done nothing around the house today not even talk game. rachel comment that she’s talked game twice today both times with Kristen. Rachel laughs “Kristen is telling us that Brendon is the swing vote” Brit :”oh my god she says that to me to”. Rachel: “I guess everyone is the swing vote cause no one is voting for her.. Oh Kristen kristen kristen”. Brit brings up Kristen telling everyone about a boys alliance, Brit: “if anyone talks to me about the boys alliance i’m going to shoot myself in the face”. Rachel agrees she’s sick of Kristen’s alliance theory. Brit explains it’s only week 4 and who cares if they have a final three so much shit can happen day to day in the house. Rachel brings up how popular Enzo is around the house. Brit knows he is, they both agree that he’s so well liked that he might have too many votes in the jury to take to final 2. Brit thinks the house has to start thinking about strategy its getting to that point. Rachel is the first to bring up Matt and how he’s really playing the game. She calls him a dangerous player but she feels Brendon and herself are safe for week with him. Brit wants to know a bit about the deal Matt made with them when he was HOH, Rachel says the deal was only for one week and it was for them not to put him up. Brendon joins them. Rachel tells Brit that her and Brendon are close to enzo and she’s sure that the 3 of them are safe if he wins HOH. Brendon thinks that he has the HOH in a bag, he’s convince it’s going to be a physical endurance and he can beat each one of the guys downstairs. Brit starts talking about the pairs in the house and how she has no pair. R/B tell her she has nothing to worry about b/r want her in the game. Rachel says she’s heard alot about this guys alliance but she think it’s Kristens being desperate, Brendon and Rachel agree. Brendon thinks even if there is an alliance of just the 3 guys it doesn’t matter they won’t last long they’ll get picked off by the weaker players. Brendon brings up ragan and how personal he plays this game, he points out that ragan is so smart when it comes to this game but he plays it on the personal level Brendon and that makes him dangerous. 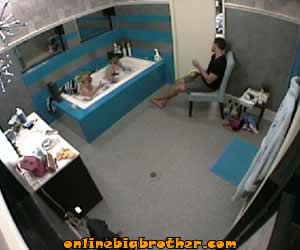 Both b/r really want to get Matt out, they say he hasn’t come up to talk with them so he must be after them. Brendon about Matt “what he doesn’t know is we know he’s trying to keep Kristen here”. They think that Matt will attach himself to whoever wins HOH and try to get them to put up b/r. Brendon warns Brit, says Matt is very manipulative and he’s a liar he’s here to stir the pot. rachel tells brit she’s in a great position, Brit thinks she’s worried because people are saying she’s in an alliance with Lane. R/B do not think Brit is with Lane, rachel thinks people may start catching on that Rachel and Brit are friends and that may be a problem for Brit. Brendon goes on about how he was really hoping to play the game with ragan on their side but he’s starting to think he’s not the best person to have around long term. Brendon thinks ragan’s being controlled by Matt and he’s got something going with Kristen because he was fighting too hard that one day about the 3 guy alliance. Rachel thinks they should keep ragan for the short term. Brendon now thinking that ragan’s emotional weaknesses could be used to their advantages, they could manipulate him easily… Brendon leaves. Rachel says her and Brendon are convinced that Lane isn’t coming after them she’s suspects Lane will put up Kathy and Ragan.

9:14pm Bathroom Lane and Matt They are talking about the HOH comp and how the brigade has it all covered, brains, endurance, coordination and strength. There a 1 in 8 chance of them winning. Matt says they have to win it. Lane tells him he’s there best chance for a hanging endurance comp because he’s so light, Matt isn’t sure because the hanging endurance comps require strength…

The persian cat for Kathy is perfect. (Note to BBGrandma — I had a white persian named Sushi. She had huge eyes with black eyeliner and loved to lay around all day on a bed or a sofa and just watch and snooze.)

Electra, we had one, too. Her name was Marvelous and she just past away 3 months ago. She was almost 19yrs old. Now we just have Muc, our Great Dane aka Coach Potato.

didn’t think tattoos has a purpose other than to get attention?? i would get a tat but im not fond of pain, im 26 and i STILL gotta look away when i get shots

They dont hurt that much these days like the old days! I have most of my lower calf done with one that took 3 hours and I was completely sober and I literally took a nap while he worked it! Also the pain factor depends on the location and of course your skin sensitivity!
Shoulders and inside arms are the worse from what Im told!

Oh yeah…..mine is a cover -up of a home job that was originally done with a guitar string and a home made gun and that did hurt and it wasn’t about the attention but back then about the meth…….When I celebrated my 10 year clean mark I went and got it professionally done, not for the attention but because what was there before was a mess! But what I really like about it is that it takes the attention off my “real” 40 G’s!!

Matt is like a little child with his hands always down his pants.

little boys do that?, thought that was a guy thing… i do it too, but not around anybody

little kids do that

somebody take the scissors away from matty loc, he got his shit lokin crooked

LOL. They can’t see what’s right under their noses. Rachel is so blinded by jealousy that she is blind to the brigade. If they had vaginas and boobs she would be worried. Once the girls are all gone, she will get rid of Ragan before he hits on her man and splits them up. Then what’s she going to do? I can’t wait to see her face when she finds out Ragan is right, as her bff Brendon walks out the door to the jury house. She will be a all alone, she will be a mess.

Lol at those pictures. Kristen/Barbara and Boy George are spot on. Kristen has good observations and is smart but it’s too late because of her people skills. She should have been more like Britney. Britney will talk crap about Rachel but is smart enough to smooze with her as well. I think Rachel will be shocked about all the stuff Brit has said about her.