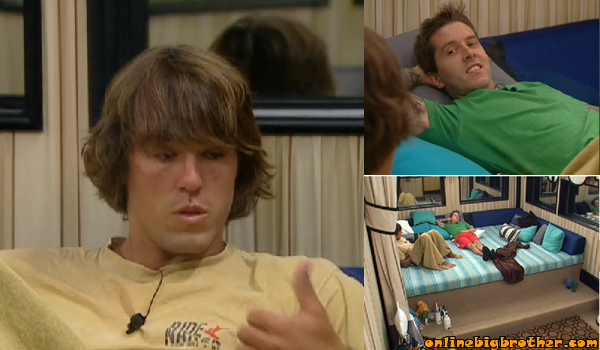 
10:25pm Cabana Room Hayden/Matt Matt is saying how weird it feels to do a goodbye message to a member of the brigade. Hayden remembers doing it for Matt. Hayden:”DUDE we got to win tomorrow” Matt:”BIGTIME, Man they’re really clamouring away out there” (talking about production building the HOH set) Matt is worried that if Brendon wins HOH it’ll be either him, Hayden or Lane up. He asks HAyden what b/r and him talked about up in HOH the other night. Hayden says he’s trying to get close to b/r they offered him safety for next week if he did the same. Matt asks him if he’ nervous about the vote. Hayden knows he’s got Brit’s vote and Brendons so not nervous anymore. Matt:”it’ll be 6 -1 “…”In 24hours from now the house is going to be crazy…the shits going to get nutty in here” Ragan comes to the comes asks if there playing Game, Matt says yes. Ragan: “Despicable …Despicable ” he walks in. Hayden brings up that brit thinks it’s going to be skill competition. Matt thinks it’s going to be something that doesn’t end with the live show, a skilled based endurance comp that runs a couple hours over the live show. Matt explains that the viewers are probably going crazy about this Brendon against all odds HOH, Production wants to carry this over as long as they can. MAtt:”it’s going to be a crazy night.. I can’t wait for tomorrow”

10:40pm HOH Bashing Kristen in the tub, going after her attempts to stay in the house and how annoying her speech is.

Off topic….I’m so sick of hearing Rachel say “Brendon and I”. “For Brendon and I”….”For Brendon and I”…. give me a break. It’s NOT always gramatically correct to use I. She just said to Britney…”You know you can trust Brendon and I”….IT’S “Brendon and ME”…
I wish Big Brother would come over the PA and give her the “Rachel, stop that!” every time she does it. If production wants to manipulate the game, I wish they would do it in a way that stops annoyances instead of prolongs them.

No biggie, I just wanted to rant on that for a minute…

I believe it should actually be “Brendon and I are really trustworthy.” We know that is not the case, but I am also sick of hearing that phrase.

I’m glad I’m not the only one…

Ali from SC
Reply to  AcesandEights

Thank God somebody else brought that up. Not like I need another reason to cringe everytime she opens her mouth but DAMN if she isn’t annoying I or me…lol

ROCKCHALKJAYHAWK
Reply to  Ali from SC

I hit mute whenever she speaks. The tone of her voice hurts my dog’s ears!

ha never mind i guess a lot of people use that

I hear you on that. The simple rule for these mindless folks like Rachel is to eliminate the “Brendon and” part of the sentence and see if it still makes sense.

You don’t even need to know the difference between a subject and a predicate, just follow that simple rule and you sound at least somewhat intelligent, Rachel.

Amen….omg…and when she says “he/she is just out for him/herself in this game” (ummm, who isn’t? who is actually in the house to help someone else win? HELLO).

For this teacher, it is like fingernails on a blackboard. Even more annoying is the eating, etc. with mouths open-the smacking, crunching, smacking is driving me crazy! I thought Michelle and Gnatalie were bad last season, but this group is collectively much worse!

ARE driving me crazy! Typing too fast.

It makes me sick how everyone is secretly bad mouthing Brendon and Rachel, but they won’t say anything to their faces. I really am praying that Brendon wins HOH just to see how pissed off everyone gets and how they start kissing his ass. Ugh, I wish people would talk bad to Brenchel’s faces! We need some drama in the house!

I agree. Brendon at least puts in the effort to be nice to all the people in the house, phony as it may seem. Rachel sometimes does “act” nice but just really come across as being really fake. The rest of the house though act all nice then bashes everyone else, especially the Brigade.

Hilarious. You expect everyone to be honest to the two idiots in HOH as they are attempting to interrogate and bully them into swearing loyalty on their families?

Yea, we all see how well that worked out for Kristen

ok – did you all see Brendon picking his nose… Then he rolled his dried snot in his fingers and flicks it on the bed. He does know he is on TV , Right? Icky – classless- nerd……

I saw it….and yes….soo gross…but like everyone says…just like a little boy would! By tomorrow it will big all wrapped up in Roachels weave!

It’s interesting that you say that about the network shows. What I find interesting about the network shows after watching the feeds sometimes and BBAD, is that when they edit together a conversation, the things that are said are rarely in the same order they were actually said in. And sometimes the reactions they show when someone says something to them is not the reaction they had when they were told whatever they showed, it is a reaction from something completely different. That’s the only reason I find the network shows entertaining.

Kathie from Canada
Reply to  AcesandEights

Something to really keep in mind when you watch the news on tv. At least this is just a game.

ok, whats with everyone picking at themselves? Brit incessantly picking @ her knees, Enzo, and Matt their nut sacks, Geeeez…WTF!?! BBAD sucks it….

Oh God, what about when they panned in on Enzo with his hands down his pants on BBAD? And yeah, I saw Brendon pick his nose. I guess they kind of forget about the cameras or maybe don’t care.

What IS up with Brit picking at her knees… Scabs…? Pulling hair out? That, plus chomping on her nails. Ugh.

This is the worst season ever! After this is over CBS needs to have another cast come on for the fall season so that we can get or money’s worth!

I’ve said that a many times, I guess my post just don’t get posted because of that. But by far, this is the worst season ever, and you can judge that with the amount of post that are being posted. I say, put a few minorities in the mix up, that way you guys will have someone to bash! 😀

So are you saying “yes, let’s bash the minorities” or are you saying “because the ENTIRE cast is white, no one wants to bash them?” I personally think that the cast is boring because there is no diversity. They got Monet out because they were uncomfortable with her “bi-racialism”, ( although she acts more white than black) it had nothing to do with the ten thousand. POOR CASTING!

Matt,Kristen,Hayden,and Katy brings nothing to the game for me their personalities sucks. I like Brit , Monet, Enzo, and Lane at least i can laugh at what they talk about during BB after dark. Brenden and Rachel kills BB after dark, makes me not even want to watch it.