7:30pm Backyard Brit, Lane, Ragan, Enzo Talking about Libra and how she left her 8 month old twins to go on Big Brother. Britney thinks it was horrible she asks them if Libra went to sequester. Ragan says she was… Hayden and Matt joins them.. Brit and Lane get into a flirty little argument over Lane comparing Brit leaving her boyfriend to Libra leaving her kids. He’s trying to make it look like Brit is being a hypocrite but is making a joke about it. Britney takes offense and starts grilling him.. He looks for a escape plan and changes the subject. Ragan wonders how popular this group is with the ratings. Enzo thinks they are getting very high ratings. 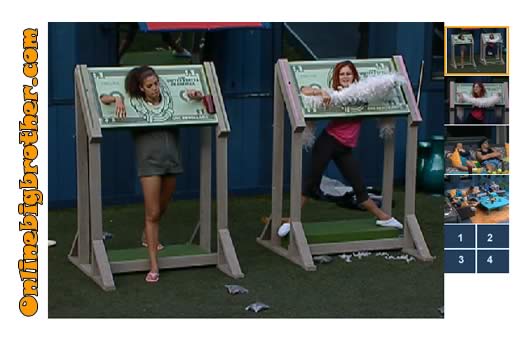 7:40pm Rachel and Money are still in the stockades. Enzo starts a drum roll and Rachel tries to rap. Rachel raps yo, yo, yo it’s Rachel here in the Big Brother House it’s no shock I’m stuck on the stocks. We’re big brother word to your mother. They then yell out that it’s hood in the house tonight. Rachel then asks Brendon if he wants to make out with a chick in a stockade. Brendon says that right now he can do whatever he wants to her. Ragan does his Renny impersonation saying I can do your eyebrows, your make up. Rachel now talking about how dramatic that whole cast was – Libra, April, etc… Rachel starts playing the word association game with Monet. Rachel says Summer. Monet says Hookers, because it’s warmer and more of them come out. The game is to go from one letter of the alphabet to the next using a word representing summer. They get to V before Monet starts says yeah, I uh, I dunno. And Rachel carries on all by herself. Rachel asks another category? Big Brother words… Alliance, Bitchy people, cat fights, dumb asses, elimination, fights, guess who, ho’s, independent competitions, joking around, kissing & kissing Asses, losers, making fr-enemies, nastiness, opposite ends of the house, pool, quite a lot of drama, Ragan, stop, tiredness, ugly fights, very bitchy moments, waiting around, x ray knows?, y do we put ourselves through this?, no idea for z.

8pm Ragan comes out and joins everyone in the backyard. They start talking about previous HOH’s. Ragan jokes about Natalie. And everyone start laughing. Someone says that they hate Natalie. Ragan is impersonating Natalie. Matt says he would love to have Natalie in the stocks right now. Brendon says, and Jerry! They are talking about what they would do to them if they were in the stocks. Ragan thinks Monet and Rachel should play the game reverse that’s what she said. Rachal says I’m getting ready to come. Ragan says god this stuff stings when it gets in my eyes. Rachel says we have to do one about you getting stuck up on that wall. Ragan says keep your knee up, it will give you traction. Rachel says I wanna be the first one to squirt it. Ragan says keep spraying. They are all laughing. 8:20pm The bell rings and they are released from the stockades. Rachel goes into the kitchen to get some food. Monet gets into the pool with Britney.

“Rachel says Summer. Monet says Hookers, because it’s warmer and more of them come out.”

i got that one immediately LMFAO

Tonight on BBAD, all Rachel can talk about is “she makes good tv”….There showmance has been a detriment to good tv….blah…