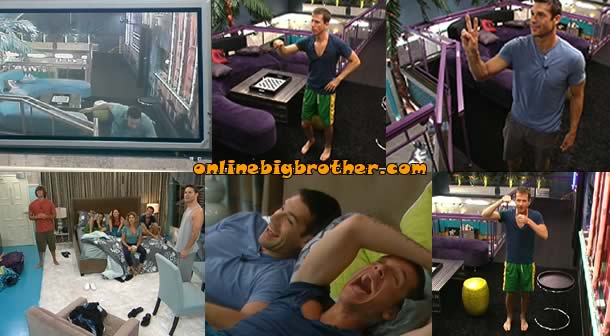 9:25pm Charades HOH Matt, KRisten, Andrew, Rachel, Brendon, Ragan are playing charades using the spy cam. The mime goes outside and does it in front of the HOH cam while the others inside HOH try to guess what it is.

9:26pm bathroom Lane and Enzo Enzo Found hair on his face, if you caught him earlier he was shaving his entire body.. He’s whispering to Lane that they should have the votes to keep Matty, but they’re starting to get worried that the mean girls are working on some peoples emotions trying to get their votes. They think she’s starting to be able to work Kathy. They’re not worried though they count through the votes and they have 5 locked (Lane, Enzo, Hayden, Kristen and Ragan) 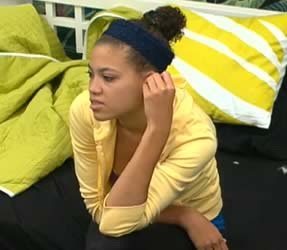 10:10pm Palm Room Lane, Brit and Monet Brit is complaining that she wants Monet to stay. She explains that they need Lanes and Enzo’s vote for Monet to stay. Lane doesn’t look too convinced, he asks about Andrew. Brit says they have Andrews vote locked up for Monet to stay, she tells him that Andrew hates Matt because he heard that Matt is going to put him up. Brit adds that Rachel told her up in HOH that she hates Matt more than Monet, and That Brendon is pissed at Matt for the whole thing. Brit is worried that if Monet goes then all the girls in the house will come after her. Monet chimes in and says she wants people to vote for what is best for them not what they think the house is going vote. Brit says they have Brendon, Andrew, Kathy, Lane and her self they have the needed 5 votes. Brit brings up that hayden is in a showmance with Kristen, she says she’s been watching them lately and there is something going on between them, She says that her target is Kristen if she wins HOH. Brit points out how big of a bitch Kristen is because she gave it a honest effort to get to know her and Kristen just snubbed her. Lane just listening.. looking a little shocked he says he hasn’t heard many people talk about voting against Matt… Lane leaves to go get booze..

Monet says that she’s going to go to Hayden and ask him what she needs to do to get his vote. Monet tells her that the other night she was staring at the memory wall and was looking at hayden’s and Kristen’s pictures and she’s convinced they are related, “Look at how their eyes are spaced”. They start planning out HOH.. just in case monet stays. The plan is to have Brit win it so she can nominate some people that gave their votes to Monet. Brit says that Kathy can only be counted on for the remainder of this week (she means bb week so tomorrow is the end) Brit says that her nominations will be Kristen and Kathy with a backdoor on Brendon if the opportunity arises. 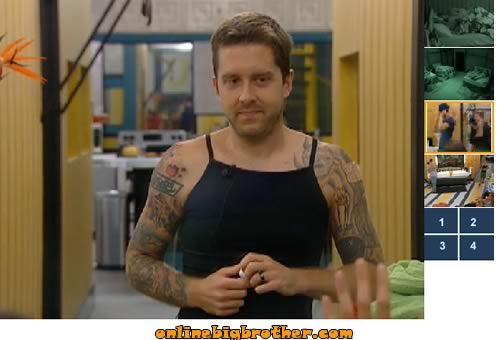 WHY IS BRENDON STILL VOTING FOR MONET? HE’S SO SMART , YET STUPID!

His brain has been fried after listening to Kathy and her “you know” and Rachel “likes”.

As usual, next week’s luxury competition will be for the private screening of a movie. I hope that the movie is “My Dinner With Schmucks.” I am sure they can relate. (Paul Rudd is, as always, adorable and quite funny).

It is outrageous the way Britney talks about Andrew, like he is a piece of junk : ” Nobody cares, if he goes “.
She is a bitter Betty and sounds like an old, ugly woman full of hatred. Sad.

I think Kathy needs to shave her “knankles” if she is serious about winning HOH!

Matt’s got this: The brigade boys of Lane, Hayden, and Enzo + Kristen, and Ragan…..Matt has the 5 to stay, unless someone flips…but his votes seem to be more solid than Monet’s……Monet’s only 2 solid votes are Britney/Kathy….Brendon could easily vote out either one, so who knows about him…

Let me add, Andrew is such a wild card, his vote is not solid for monet as she thinks……

Who knows where Kristen’s head is though. She knows about the brigade. She has Hayden in her pocket, but the other three would vote her out first if they were final 5. She is smart enough to know that she needs to break up the brigade if she wants to get far and have a shot at final two. If she flips, she can blame it on Ragan and stir up some shit that way. Monet still has a chance. Not that I like her, but it would shake up the balance in the house, which is what we need. This season is on life support as it is, with brit being the only one to play the game this week.

Rachel, sweetie, Brendon parents have been watching you and I think it is too late for you to change their thinking of you now. You have come off as a bad girl and he has come off as a, well, he is different.

I’m the mother of a single 25 year old son. I pray he doesn’t ever embarrass himself by carrying on with a girl like Rachel. I see her sweet side, but please…… wearing no underwear and letting her cheeks and boobs/nipples hang out for the world to see????? Maybe Brendan’s parents have already seen more than they ever wanted to see of this girlfriend…… I agree, it is too late, Rach.

My son is 17 and was watching BB and THANK GOD he said that Rachel was nasty! He was all about Brenden using Rachel until I told him that Brenden has cried for her……he couldn’t get past that and left the room. I told him that Rachel is NOT the kind of girl you bring home to mama. Of course, he thinks Brittany is hot-I think she is hysterical….so maybe she might work :)

kathie from canada
Reply to  Sophie

I also have a son – 27 years old. Solidly grounded in reality and has chosen his girlfriends wisely – thank God. I can’t imagine Brendon’s parents are trilled at this point! And Rachel’s parents … ?????

The best case scenario for tommorrow is that Monet is voted out, and Britney or Andrew wins HOH….Britney will become a much better player with out the baggage of monet…

you guys, i’ve been gone for like 4 days & have no clue whats going on anymore. does it look like they’re sending monet or matt home?

Well, right now it looks like Monet is going home but Brendon, Rachel, and Kathy are mad at Matt. But, they feel that they need to keep him for now and get him later. However, things can change.

why was matt wearing a women’s (annie’s) top? surely he knew it was a women’s tank top…..ummmm creepy. and what a skank he is to be lying saying his wife has a serious illness,,,,all the while telling it with a smile on his face!?please,please,showtime stop showing B & R ‘s fake ass showmanship. it comes across so phoney and besides i’m sure brendon would rather have a showmanship with ragen.more camera time for kristen and haydon,please.someone needs to step it up a lil…..nobody’s thinking in this game.it’s like 7th grade recess.

Agreed- as someone whose mobility suffers from Lupus, I can’t believe Matt could lie and that his wife has a disease in which she’ll lose her leg or ability to walk if they don’t raise money. Lying and omitting the truth to further your game doesn’t have to be so low. He prides himself on his intelligence, but he’s one of the most idiotic players: MENSA? It’s a club (that requires a hefty annual fee) for boring braggarts who can pass an internet IQ test. WOAAAAH!

Matt, I hope you break your leg and have to leave early.

I don’t know why Matt was wearing the woman’s top but it turns out it was Kathy’s. Tonight B&R were talking that Brendon’s parent might not go for Rachel. Gee, I wonder why? Maybe his parents know more than her and what he really likes. You think????

What will be funny is when B and R leave the house and break up…..they will be so surprised that their relationship didn’t work out. I’m sure everyone following BB won’t be.

Rachel is the true definitiion of a butterface. I could look at her body all day but when they pan in on her face I really think I need to drink a 6 pack of Bud Light to make her prettier. Her lips look weird and she has a snaggle tooth to boot. And that laugh….OMG it sends shivers up my spine. I live in Las Vegas and Rachel’s are a dime a dozen out here. Cocktail waitresses in big night clubs that are just looking for a rich dude to take care of them.