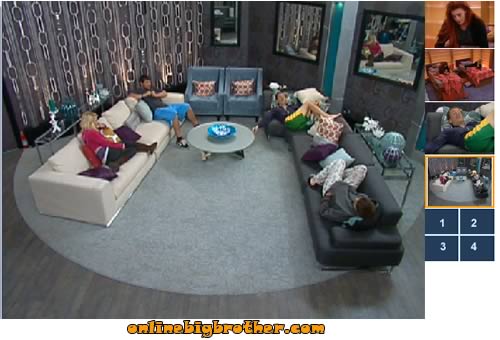 Check bitchybigbrotherout its funny and awesome.
8:50pm HOH Ragan, Brendon, Rachel Ragan tells them that he’s going to be fighting as hard as he can to win hoh.. Ragan tells them that no matter what happens if ragan wins HOH this coming week that he will not put B/R up not even as a pawn they are safe and he hopes they can offer him the same level of safety. .

Brendon says they appreciate Ragan helping them out in this game and providing them with logic. Ragan tells them that he really believes what Matt says and he just wants them to know that what Matt has told B/R is the same thing that Matt is telling Him. Rachel says before yesterday Matt wasn’t even anywhere near her radar.

They now start planing out how best to prepare for tomorrows HOH. Brendon is going to eat a huge ass bowl of Slop before the Comp and Ragan suggests that they should have a good stretch in the morning. Ragan thinks that it’ll be the endurance comp where they will be tempted to drop for prizes. They are both going to be pissed if someone drops early Rachel “It’s going to show us the people that are here to play the game”
Ragan “I want Brendon, Matt or myself to win”.
Rachel: “matt told us he’s putting us up”
Ragan: “NO WAY”

Rachel and Brendon go on and on about the house being after them. Ragan asks them if there was anyone in particular. Brendon says that a lot of people are not vocalizing it….

9:00pm Cabana room Enzo Lane and Matt talkign about how scrawny the fish are and how kathy won’t let them feed them.
Enzo: “bunch of bulimic bitches go eat “…”we should feed them weed to give them the munchies then don’t feed them at all”…

9:02pm Kitchen Enzo and Lane joking around (FUNNY worth a flashback Cam 1) They are talking about the endurance comp. Enzo had said earlier that he can’t handle spinning in circles it makes him sick.
Enzo: “I’m going to throw up on people YO”… “I can do that”
Lane: “Spit on people as you swing by”
Enzo: “I can do that Yo i can do that, as far as swinging i can do that yo i’ll throw up on them ”
Lane: “i’m going to back some forks and throw them ”
Enzo: “ya ya i can do that YO can do that ”
Enzo: “you have to take sleeping pills then try to fuck someone” (yes he said that and said it out of nowhere)
Lane: “maybe you die and they try to revive you”
Enzo: “yo they’ll pump you full of tranquilizers and you have to try and walk across a field”
Lane: “they cut a artery in your leg and you have to stitch it up ”
Enzo: “you have to kill a flamingo and stuff it”

9:25pm Enzo heads to the cabana room where Hayden and Kristen.. they start talking about the HOH comp.

Matt needs to go! PLEASE!!!! I don’t mind the brigade, but I honestly can not stand Matt.

Will Smith sang it best – “I’m stuck in a basement, sittin’ on a tricycle, girl gettin’ on my nerves; Goin’ outta my mind, I thought she was fine, don’t know if her body is hers. “

ragan’s conversation was cut short! Was that on purpose or was it the feeds. If Ragan should win HOH, he should align with Britney, Monet, Rachel & Brenden and they can be called “The Powder Puff” Girls. I am sure Ragan 9like most of us gayboys) have flexibility in places you’d never think. We have conquered the pain of having to sit on something we didn’t enjoy for several hours at a time. We have learned to swing from everything from chandeliers, to shower curtains while sings “Everything Comin Up Roses”. But most importantly, we did this, not just for the furs, diamonds & lavish vacation and shopping sprees – NO!! We did it all for love. Now get in there Ragan and win this one for the “Pansy Division”.

I like pansies and most citrus.. haha jimik if you weren’t gay I’d chase you around with my underware

Okay. But first, I’d have to borrow Kathy’s wheelchair.

Hayden needs his bangs cut. You can barely see his eyes. Have you notice kathy is not hanging out with brachel as much,lol. I love how lane says kristen is a little weird.Andrew is the only 1 who actually is on to the whole house. He ‘s not fooled by any of them. I’m also glad the whole house knows about showmance#2.They should leave right after branchel.

I’ve been grumbling about his hair since BB aired.

Yeah its like a shag! Kristen hair is a complete wreck. Omg Kathy said she has a cold sore,lmao. How many trashy outfits Rachel will pull out of her bag of tricks? I’m just sayin’

Or, at least cut off where his bangs flip up. He looks like he has worn his stocking cap too long. Is he Canadian?

Hey now, we only wear the stocking hat 11 months and then we get a haircut, whether we need one or not.

Hahaha! He has to do something with that mess! I’m looking at him and I see no eye balls! Not only is his hair a complete mess, but he looks like he wears the same thing over and over. Does he even shower?

He looks like he just came straight out of the 70’s.

that haircut is popular with middle school boys in southern california

LOL, but at least the middle school boys go to a stylist to get a nice shape to their shag!!! Hayden is a tool who is going to be 30-35 and wondering what happened to his BMOC lifestyle, why don’t ppl think he’s cool anymore? Why are all his friends still 18-22 y.o. drunks?

I am a total junkie now… I just woke up and couldn’t go back to sleep, kept thinking about checking this damn blog! Sitting here sipping Joe and catching up. 4 hours of sleep is going to kick my butt later. Thanks Simon & Dawg. I am going to need a donate now button to pay for my sleeping pills before this season is over!

I’m up too :( 4 hours of sleep is going to kill me tomorrow

haydens hair is horrible he would look 1000 times better if he cut it !

AGREED! In the diary rooms with the hat is the worst!!!!

He should just shave it! It would look a thousand times better.

Heres a few reasons why Canadian Big Brother would never work up here,
1. We would love fish sticks and even sourkraught,
2. We would try and screw all the girls, eff the showmance,
3.Add booze to the house and your gonna get ya a brawl.
4. If the compititions didn’t involve hockey trivia, we would all lose.
5. We would be very happy just to get the stipend, its probably more then our job pays.

And no one would sit outside because it is too damn cold and there are bears.

Lol, that would depend on what part of the country they had it in, If they had it in Quebec, the bears wouldn’t have anything to do with the english speaking people, and we love the cold, cold hard cash, cold beer, cold kraft dinner, ect.

I would watch and wear a coat.

Grandma where do you live that it is so warm? It’s not cold up here at all. We have florida temperatures give or take a degree or two. All of Canada does at times.

Portland Oregon and it is cold and wet. Suppose to warm up this weekend. I have never been to Canadian. Will have to go someday. I just love to tease Canadian Fan and you and all the other crazy Canadians. You guys make me laugh so much.

You’d never get enough people to sign up if there wasn’t a good supply of BC bud and tim hortons. And the HOH would probably put himself up because it isn’t nice to put someone else up. Imagine13 passive aggressive Canadians locked in a house with no beer and no drama. BB would never work up here, which is why we love USBB.

I could live off Tim hortons, not so much the beer. I’m a lightweight. Last time I got drunk I tried to surf the counter at KFC but we won’t get into that. haha

I was watching after dark and I thought they got a new houseguest! Turns out it was Kathy ! I just didn’t recognize her standing up and laughing! She even told a few jokes, making fun of Enzo in the shower. It almost seemed like she was having a good time. Chilli lip and all!

Mr. Pickles, just listen for “you know” and you will find her. She is on right now and I have counted her “you knows” 30 times so far!

she’s up in the HOH right now and all i hear is YOU KNOW.. actually I could turn off my headphones and still transcribe the entire conversation she’s having with B/R heres a excerpt

KATHY IS TRYING TO COVER HER AZZ! YOU KNOW’LOLOLOLOL!

Is she really pulling for Monet now?? WTF she is useless..

simon – you make me laugh… you know..you know. .i actually have to change the channel when Kathy/Rachel or Brendon start their pow wows.. yawn fest.

was it me or on tonights show, did you all get a feeling that AG is still favoring R/B. Nothing like what we see on BBAD. They really want us to like them. I did love that they were willing to put some of Brits one liners on the air.. Perfect.. And I don’t care but I still like Matt or Ragen to win this- and also hope that Hayden doesn’t let the chick take his eyes off the game..

You know I agree.

I thought they cleaned R&B up and made them look like a nice young couple that you should be for. I guess they couldn’t show Rachel not wearing her undies.

I do think that CBS wants us to like R and B, but if they read the web sites, they would see that the majority of BB fans can’t stand them…..hopefully they’ll get a clue and not give them anymore camera time.

So whats the outcome of the HOH? Is it over?