8:45am Big Brother wakes up the houseguests for the day.  Enzo goes out to the backyard couch and lays out trying to sleep.  Kathy and Kristen are in the bedroom talking about the power of veto ceremony.  Kathy says that Britney is as bad as Brendon and Rachel because she is going after Kathy and she doesn’t deserve the money.  Kristen says that they stayed up so late again last night.  Kathy says yeah that’s what happens when they drink so much. Kristen says to Kathy “seriously if I stay here I am going to tear this house up.”  Kathy says you are going to stay here.  Kristen asks Kathy if they will let her just lay here because she is so tired.  Kathy says that she’ll need to go change her batteries.  Kristen says yeah but if I get up I have to put the hippy uni-tard on. 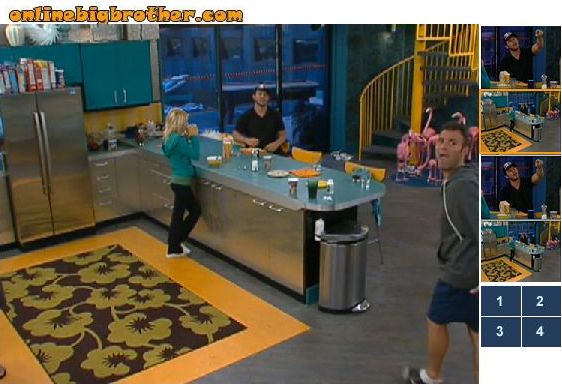 9am – 950am Britney and Lane are in the kitchen talking.  Britney is giving Lane advice on his dating life.  Britney tells Lane that he get back together with a girl that has been fixed because Lane needs to procreate. Britney explains that Lane just needs a good southern girl.  Lane says that he keeps picking the bad girls at bars and that he needs Britney there to zap him with a dog collar when he picks the wrong girls.  Britney and Lane talk about girls that are strippers are not good for relationships.  Lane says that he got kicked out of a strip club because she didn’t give him his change back.  Lane goes off while looking at the camera saying I gave you a 50 and it was $40 and all I wanted was my $10 back.  Lane says that they never give change back.  Enzo wakes through the kitchen and yells BLAAWOA, BLAAAWOA, BLAAWOA…  Lane says that he tried to ask her for his change back and she just kept saying yeah yeah …I’ll break it for you.  Then she grabbed the bouncer and got him to kick me out.  Lane says that he didnt even get a good lap dance from her that it was his birthday and his friends got him the biggest stripper and she started talking all about her sad life story and that it got all depressing in the room. Brendon talks about how he and his friend were in Denmark and he needed money and gave an entire room lap dances in their underwear.  Britney says great your a stripper.  Lane then escapes the conversation with Brendon and goes to the bathroom where Kathy is putting on her make up and he sits there and laughs at Britney who is still trapped talking to Brendon.

10:15am In the lounge room Kristen and Britney are talking about Britney using the POV or not. Kristen tells Britney that if she does this deal by taking Hayden off she would try to keep Brit safe but she won’t promise her life in the game had she taken Kristen off rather than Hayden. Kristen tells Britney that if she stays she would not go after Rachel. Rachel comes into the lounge room and their conversation stops. Big Brother tells Rachel to change her battery and she leaves. Britney tells Kristen that she deserves to stay more than Kathy does. Britney says that if Hayden comes down and Kathy goes up Kristen will have the votes to stay 100%. Kristen says that she understand that even if Britney didnt use the POV Hayden would stay so that she knows its necessary for Britney to use it to keep her (Kristen) in the house. Kristen promises Britney safety if she use the POV to save Hayden and gets Rachel to put up Kathy in his place. 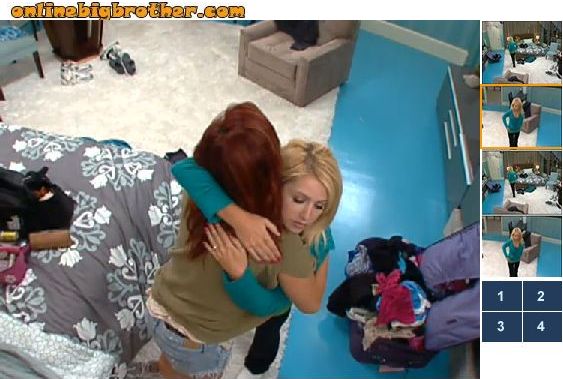 And yes, I am being very sarcastic in my above comment.

Damn it! I want Britney to use the veto. I bet Britney is wishing she took the solitary confinement instead of the damn veto right about now!

Brit don’t use the veto

LOL rachel is stupid she don;t even know brittney is playing her, BRITTNEY for the W

You have to be a brave man to touch a quarter out of a stripper’s “who-ha”. Damn thing would probably be toxic.

I get a little nervous and stressed out when they start talking like that! Just let the noms stay the same and see what happens!! Dont over think it! You did what you did now stand by it!

I think Lane deserves the money. He got jerked outta $10. My homie just wanted his change back.

New saying for the week: Brandon and Rachel are a showmance with “benefits”.

If they are still saying that Kristen will go home, why even thing of using the VETO. Although, it would be hilarious if Britney used the VETO on Kristen and Rachel put up Enzo or Lane. Now that would stir the pot and break up an Alliance a bit. Ha Ha! Would they vote Hayden out??

Now that would be funny! And yeah….I think Hayden would go out!

Matt should have put BR up last week. Big ups to Rachel for being bold enough to put up a COUPLE! Matt is an idiot and the brigade should have secretly thrown him out off their alliance for that wimpy move.

Each day, more people in the house are on to the fact Matt is double and triple dipping in the alliance department.

He will probably be going home as soon as Roach and Brenda are dealt with.

why are ppl so down on matt? he made what was possibly the smartest move in the game. anyone notice how matt wasnt nominated this week?? and hoow b/r seem reluctant to put him up when they dont even trust him?

Sorry, I must have blinked or something, what was the smartest move of the game again?

Matt is playing to be the Ronnie of this season… he has been openly busted a few times so I guess the folks are biding their time with him. He isn’t even dangerous with his dumb plotting. Andrew was an idiot too, he’s gone, Matt is only a matter of time.

i love how everyone hates brenchel and really they are the only ones creating anything worth watching on the show. they win most of the competitions, they stir drama, without them it’d be the stupid brigade, b o r i n g

brigade is stupid!!!! i hate matt