10:55am – 11:10am Brendon and Rachel talk in the HOH room about buying out someone by giving them $5000. Brendon says the only person he worried about winning the next HOH will be Matt. Rachel says that he could be bought out by the $5000. Brendon says that anyone in the house can be bough out, but especially Matt since his wife is sick. Brendon and Rachel both agree that they wouldn’t even be temped by that small amount of money but that the others are stupid and would go for it. Brendon talks to Rachel about making a deal with Britney and says that he isn’t opposed to making a deal with her. Rachel says that she isn’t either and that she trusts Britney. Rachel says that they just haven’t shook on a deal yet. Rachel tells Brendon that he needs to win the next HOH and that he needs to start training. He wants to go over personalities and people… Brendon and Rachel start talking about how it’s stupid if they make alliances with weak players that aren’t winning anything. Big Brother calls for an outdoor lock down. And Brendon asks so Britney is not going to use the POV? Rachel says yeah she’s not going to use it. Rachel is pissed and says that it’s just too coincidental that just before Britney was going to talk to Hayden she is called into the diary room so that she cant talk to him. Brendon asks what? Rachel says that Britney was just about to let Hayden know that she wasn’t going to use the POV on him. Rachel thinks Big Brother is trying to alter the game. Rachel says but now she thinks its just better that Hayden gets blindsided at the POV ceremony.

11:15am All the houseguests go out into the backyard except for Britney who is still in the diary room… Soon after the feeds switch to the we will be right back screen…. 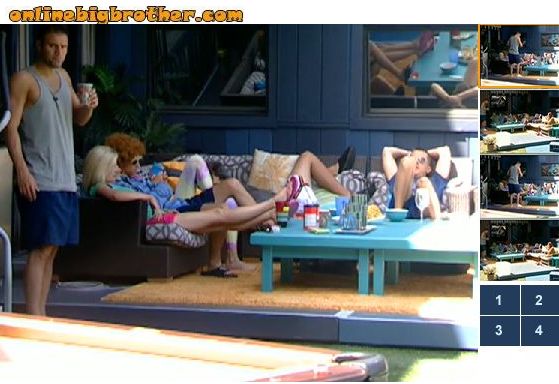 11:35am The feeds are showing TRIVIA …The POV ceremony is happening right now. We pretty much already know that the nominations will stay the same, Britney and Rachel discussed the options and decided its better that Britney doesn’t use the POV to save Hayden. Its interesting that Big Brother called Britney to the diary room and didnt allow her to tell Hayden before hand that she wasnt going to use the POV. Hayden is going to be blindsided now and probably isn’t going to be too happy….

I can’t believe Rachel and Brendon haven’t figured out that the entire house- not just Kristen, is gunning for them.
One word: idiots
lol

Oh yes they are idiots. They think they can do whatever they want and the other HGs will buy into it (pun intended). Let them think this way because when the tables start turning on B/R, they will never know what’s hit them which will be hysterical. I just Matt out also, I can’t stand this poor excuse for a person with his sick wife routine, that is so disgusting.

The only idiots are the ones that can’t get them out of this house. I think it’s crazy tha they are still in this after being a target since day one. Bravo to them…

So far Matt has played the dumbest game not putting up B&R when he was HOH… what a waste of time his HOH was. All because he was afraid of having a target on his back…. maybe that is why he is always fishing around in his shorts? He is trying to find his balls….

What are you talking about? By doing that, he was safe this week. That was a great move.

Absolutely. He would have been up on the block had he not made that move

What time is the POV ceremony at?

Its happening right now …it has been showing trivia since 11:15am

I hope that Britney doesn’t get nervous bc she didn’t get a chance to talk to Hayden and decides under pressure not to make him angry and she takes him off anyway —- which would leave Rachel hanging…and then Rachel puts up Kathy bc she hasn’t thought it through and wasn’t prepared to put up a replacement…i know BB wants to mess with the house, but is THIS what they want….or do they just want Kristen and Hayden to explode bc they think they are being saved??

Thanks for the visual, yo.

You really think Brit is NOT gonna use that POV? I know what she said to Rachel, but ya think sh’ell go against the house (at least Hayden, Kristen, Lane and Matt)??

It will be intersting. I’d MAKE Rachel place another target on her back. Take down Hayden and, of course Kristen goes, but Rachel has to put someone up. I am betting it’s Lane.

but she’s not going against the house, noone really wants Kristen to stay except Hayden (and he only half so)…it poses too much of a risk that any one of them could go up -despite whatever deals were made. Everyone was going along with it with one eye open more to appease Hayden than anything – and I dont think anyone really believed she would do it anyway. With the nominations intact, Britney is essentially securing the safety of everyone else in the house, and in doing so, she is further gaining their trust. So what if she burns a bridge with Kristen, Kristen is GONE. AND Hayden will leave her alone bc the brigade will tell him to and he has some ground to make up with them for having a secret alliance and dividing his loyalty between them and Kristen.

I love thow B/R think that they themselves wouldn’t be tempted by $5,000 but that everyone else in the house would be. lol! please.

Results of POV ceremony, anyone???

She didn’t use the POV? DAMN! I wanted a good twist to the game!

Ok, well, no POV used. Went to the live feed and Brittany is actually doing an excellent job diffusing the anger towards her from Hayden and Kristen.

Not liking this……Booo…Send Kathy Home…. I wanna see Kristen make good on her threats to B/R…bring it!

There are a lot in the house who have won nothing.

I hope Brit uses the POV just to see B/R reaction, that would be priceless.

i dont like rachel at all i like brendon much more with out her but to bad rachel and him are together. i love ragan brittney and lane and enzo haha maybe haydon not soo sure about him the rest i dont like at all

Enzo and Lane haven’t won crap!! I just don’t understand why people who don’t win crap can have voice in an alliance. Why oh why would you make an alliance with a ppl who can’t win anything (sans Brit)?!?

Enzo is the biggest floater ever and talks like he runs everything AND is as dumb as a pile of rocks. I just can’t understand why ppl like him.

Look it’s not a great year for entertainment value on this show so I would rather watch Enzo talk about how he kisses the HOH’ s ass every week and checks his balls at the door to do it, than watch Matt screw up his HOH and Hayden say 12 year old boy endearments to Kristin. So yeah, in a year of dullards I will stick with Yo, I’m running things, than yo, my hand’s down my pants again and I still can’t find my balls.

I think they should bring Kristen back as the extra player. Would love to see the look on Rachel’s face if that happened. Priceless..

As much as I dislike Rachel’s laugh and her general air of skankiness I completely R-E-S-P-E-C-T that they have been targets from day one and are still in the game. Not only have they stayed in the game but they have won competition after competition to stay there, not depending on others too much. Its pretty much the house Vs. R/B, you have to respect ppl who stick it out against those odds. LOL @ FAIL Brigade

I completely agree with you Watcher. Its good to see people under pressure who can still produce results. I admire that talent even if I don’t personally like either Rachel or Brendon. We can hate on them as much as we like but they get results!

I heard a rumor belived to be true that the “life long friends” in the house is really MOther and Daughter… Brit & Kathy… SNAP! look at them they do look related and they keep apart most times if u noticed that