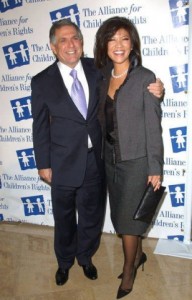 CBS President Les Moonves’ wife, Julie Chen, could soon be the face of a new daytime panel chat show for mothers. Chen — who has a son, Charlie, with Moonves — and “Roseanne” star and lesbian mom Sara Gilbert are preparing to shoot a pilot for the network for a show to rival ABC’s “The View.” Other possible panelists linked to the project are Lisa Rinna and pregnant “Real Housewives of New York City” star Bethenny Frankel. A CBS source said, “It’s a daytime panel show to take on ‘The View,’ targeted at women with children and hosted by celebrities, journalists and regular moms. A pilot will be shot in early May.”

Julie Chen has been on maternity leave since she and her husband, CBS Chief Executive Leslie Moonves, had a son in September. She will tape a pilot for the talk show in early May, according a person familiar with the discussions. It’s unclear how the talk show would affect Chen’s post on â€œThe Early Show,â€ which she has co-hosted since 2002.

Chen, who has been at her home in Los Angeles during her leave, is gearing up to return to the morning show in the next few weeks, according to a network source. Last week, she taped an interview with George Lopez that aired on the program, and she plans to officially come back in mid-May, anchoring for a time out of the New York studio, the source said. Chen is then expected to return to Los Angeles in the summer to tape the reality show “Big Brother,” but will continue hosting â€œThe Early Showâ€ from there.Â  The â€œViewâ€-style talk show is just one pilot CBS is considering to replace â€œAs The World Turns,â€ which is slated to end in September after 54 years on the air.