9:50pm JULY 12TH Backyard Annie and Kathy Annie is smoking and telling Kathy the same thing she’s telling to everyone else. basically nobody believes her what Rachel did, everyone thinks she overreacting, she can’t wait to see the video tapes then everyone will know she’s telling the truth. Annie goes over everything just like 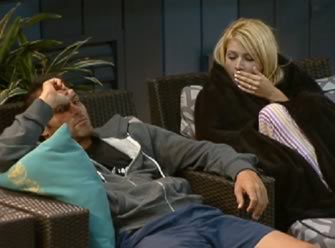 she said to Hayden 30 minutes ago, she doesn’t forget to point out that Brendon and Rachel are a team and they are a very strong alliance. Annie says she knows people are saying that this is her last chance to save herself and that is why she’s doing it running around and spreading lies but “Its the truth the video tapes will show” Monet joins in at one point allowing Annie to reiterate parts of her story.

Enzo and Lane join the girls. Annie starts again.. explaining to them that Brendon and Rachel are together and that Brendon is going to make it far in this game… she says more or less the same thing… Brit joins them they start chit chatting.

10:10pm – 10:41 Kitchen Everyone is getting food or eating. Kristen and Rachel leave to look for their “Libation” in the storage room. they sing “wheres your Libation”… “Libation… LIBATION” they find out that the booze isn’t there and head back to the kitchen. They wonder why there not getting any alcohol. Kristen says the amount of booze they’re given each night is “like the same amount some people drink in one day” Brit tells her they don’t not to have us all wasted in here crazy shit could happen (watch the one season of BB from Russia and you’ll see why BB doesn’t have liquor)

10:35pm Backyard playing pool Enzo, Hayden, Matt and Lane. Enzo comments on how the house is flipping faster than thought. he says if rachel goes and then Brendon all thats left is easy pickings. He tells them both Brit and Monet are in his pocket there on board with their plan to backdoor Brendon next week. Enzo compliments Annie on fighting so hard to stay in. hayden brings up the saboteur and says that a conversation he had with Kathy got him wondering that maybe the lifelong friends could be a married couple. Hayden suggests Brendon and Rachel. Matt doesn’t think they are married but he does believe they are the saboteurs he thinks Brendon and Rachel are faking the showmance . He points out it’s kinda fishy that they are so close after only a few days, He says it just doesn’t add up to him…. They decide to stick with the plan and turff Annie. The goal for next weeks HOH is to throw it to Monet because she’s on-board to backdoor Brendon.

I think Hayden and Kristen are the life long friends based on a conversation they just had alone in one of the rooms. They were commenting how they think they are doing a pretty good job so far and they don’t think anyone suspects anything with them.

Does this mean one of them is ‘The Saboteur’ or is that a separate thing? I’m liking Kristen more. I think she could be a pretty good player in this game.

I think something is up with Hayden and Kristen too…..

I was thinking the same thing! If one of them is the Saboteur, they are doing a good job. Never would have suspected Hayden. It’s probably the one you would never suspect!

My thoughts exactly. That was pretty interesting. I wonder if they meant that to go out, or was someone in production asleep at the switch?

At one point they were acting like they didn’t want anyone to know they were aligned….but I think it could be more than that!

Based on Hayden’s 2008 bio from the AZ State baseball team web page he has a little sister named Terryn. I wonder if “Kristen” is actually his sister Terryn. Found a vid of her riding a rodeo horse on Youtube; looks an awful lot like Kristen.

if you look up terryn moss on facebook, you see the same girl from the youtube, i dont think that is kristen. but they are the life long friends, prob just friends not relatives since there seems to sexual tension

IF one of those two is ‘The Saboteur’, I would guess it’s Kristen because she is probably one of the ones I would have least expected. It would make sense if she was. She could go far and no one would have a clue it’s her.

ME TOO I LOVE KRISTEN !!! WOOO

i always thought the saboteur was kathy

The entire BB cast are related or are friends and each pair they have told YOU ARE THE ONLY PAIR…..and in reality they all have a “friend” in the house!

I think so too. There seem to be a lot of parallels. Brit and Kathy from the same state. Maybe Kathy’s son is Brit’s fiance, or they are aunt and niece. Kristen and Hayden obviously have some kind of history. Kristen and Rachel modeled for the same agency. Monet and Matt are from the same state. Andrew and Annie from the same state. Sometimes it feels like Annie and Brendon might have a history, I mean she seems just a bit too betrayed for someone who just met him a week ago. I saw on another blog somewhere that Ronnie from BB11 tweeted that he knows one of the HG but won’t say which one. My guess is that it would be Matt, since they are both into computers and I think Ronnie was going on about being Mensa. If everyone thinks they are the only pair, being called out by the sab would freak them all out.

Yeah….we could be onto something……I think how Brendan and Annie are acting is somewhat suspicious also…..hmmmmm

i always thought kathy was the saboteur

I’m rather convinced that Kathy is the saboteur…. she simply has been wayyyyy to discrete about her theories then contradicting herself with strange mannerism….

#1 Each of the first 2 times the saboteur declared his/her presence in the lounge (big area that the contestants gather up) she was the only one overreacting, both times her behavior just seemed so out of character and it stood amongst the rest of the houseguests

#3 When her face was e X’d her indifference seem much to strange comparative to her first reactions, also the best way to avert suspicion is to simply align in position of ‘the victim’…

#4 Not ONCE but TWICE has she sent out subtle hints of possibilities for the saboteur that have stirred up distress: Woman and now Lifelong friends?

wouldnt it be funny if kristen and britney were the life long friends no one would expect that!

I’m thinking maybe Hayden and Kristin are the life long friends after the BB after dark conversation. But I’m still not too sure about the sab. Kristin has been so out of the loop, that I almost forgot she was in the house. But I’m still not sure if she is the sab.

I thought Britney was really cute when this season first started, but I cant stand her now. She talks about everyone, especially the girls! She thinks she is better than everyone and it drives me insane.

It’s Monet, I have zero doubt.

i like the everyone’s somehow connected theory, that would really shake things up. as for the sab, im thinking it’s one of the quiet people in the house that no one would suspect. when everyone assumed it was andrew, i thought, way too obvious. btw, i hope ronnie isn’t in mensa, he’s not as smart as he thinks he is and he’s pathetic. if he is i feel sorry for matt.