8:20pm Taj Rachel, Kristen, kathy and Brendon Kristen is trying to convince them that Monet still needs to go she explains that Matt now has a huge target on him and people will be trying to take him out because he’s sneaky. Kristen thinks that Monet and Brit are a much more dangerous duo than whatever Matt has cooking. Kristen says she thinks that because of what happened tonight no matter who wins HOH they will at least put matt up. Brendon isn’t sure about that he brings up that Matt did a very good job defending himself. Kristen continues and says that MAtt was nervous everyone knows he’s up to no good he’s going to be the target next week. kahty points out that Matt has no alliance he’s dead in the water right now. ragan joins them and Brendon leaves. ragan says he’s not going to be put in the middle of this he’s friends with Matt and Rachel and he just wants to help get out the truth. They rehash the meeting.. 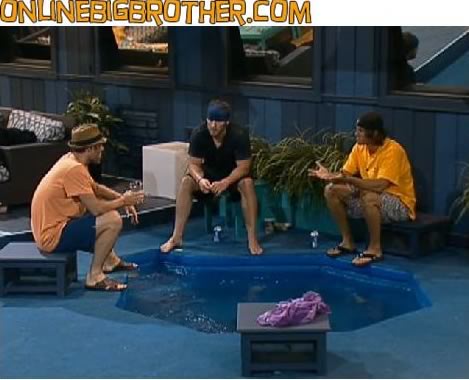 8:40pm Hottub Hayden, Lane and MAtt They’re counting votes worried it might be close. Matt tells them theres no way that Ragan is voting to keep Monet. He explains to them that Ragan can be trusted they should keep him around until final 4. Hayden says Kristen will vote to keep Matt thats a locked vote. Matt talks about the experience of being in the “Meeting” He calls is a firing squad. Lane says Matt did a good job of dealing with brendon and rachel. They go over the votes for monet you have Brendon, Brit, Kathy, Andrew and for Matt you have Enzo, Hayden, Ragan, Kristen, and LAne. It’s close but they feel safe. Lanes suggests that Matt lay low until HOH, Hayden interrupts and tells Matt it would be perfect if he won HOH. They all start to ponder who started the Rumor that Kristen was going to keep Monet. LAne thinks it was all made up to give the hosue a shake.

9:00pm Storage Room ragan, rachel and Brendon Ragan is explaining to them how this entry house meeting made Monet look like the poor victim, it made MAtt look like a sneaky snake and made Rachel and Brendon look like a power couple. Ragan starts defending, saying that he never heard MAtt say he was going to put B/R up. Brendon says he probably didn’t because he knew you were close to us. Ragan is positive that b/r can make a deal with MAtt and they can’t with Monet. Matt says everyone is after matt his back is against the wall. he’ll make a deal. He tells them that there is only 2 people that he really has gotten to know and trust in this house and that is Matt and rachel and he thinks they can work it out with Matt. (rachel is looking suspicious glancing over at Brendon all the time) He tells them that if matt or Rachel go home it’ll be bad for his game but also bad for his sanity.

Britney is a genius.

It’s because her brain can be compared to a BB rolling around in a boxcar.

It’s because you can take her brain, shove it up a gnat’s ass, and compare it to a BB in a boxcar.

Brendon is an idiot to think that Matt isn’t playing with one. Its very obvious to see that Rachel is the true brains in this alliance.

It looks like Brendon’s vote is the deciding vote….Matt has Lane, Hayden, Kristen, and Ragan….I’m not so sure he has Enzo, but he would probably keep Matt…and that is the 5 votes to stay…

but if Enzo flips then Brendon decides who stays and who goes….

I think Matt has Kathy’s vote.

Brendon – I have no idea where he will go.. we’ll see.

Yep, I think kathy might have attached herself to rachel too much, and wil tell kathy to vote out matt…..I think eventually lane and hayden will make sure Enzo is onboard to keep matt…..Rachel seems like she hellbent on getting rid of matt….Andrew is getting tight with Britney, and will vote to keep monet….The next day, Rachel will be trying to flip Kristen, kathy, and Enzo to vote to keep monet…

I don’t Kristen is going to vote Matt out.. she wants Monet Gone. If Enzo decides to vote out Matt, then he put a target on him – don’t think he’ll do it. I guess we will know tomorrow.

Matt chances are looking up today than they did yesterday…..I think Kristen will flip the first time there is trouble in the brigade alliance, I don’t think she should be trusted at all…She told hayden it will be good if brendon wins HOH next week, and if that happens Hayden has a good chance to go up…..She either isn’t think right on that issue, or she is playing both sides, which clearly seems to be the case to me…

Will someone please smack Rachel in the head to get her to stop repeating herself please! We get it you and Brendan really love each other after two whole weeks. And yes Rachel you are the dumbest person in the world to put a showmance ahead of 500,000. And Brendan you are just plain dumb. I’m a bit behind watching on DVR but if she says “honest to god” one more freaking time.

It’s not as bad as Kathy’s, “you know”……”you know”…..”you know”….She begins every sentence with that phrase…

At this point listening to Rachels voice is like listening to someone constantly run their fingernails down a chalkboard. I just shiverred….

Rachel is an idiot. Talking about what kind of season the show is gonna be. Duh stupid you play to win the game and not to make the show more interesting. Big Brother is set up for drama!

These people should be more concerned with playing the game than how much screen time on TV they are going to get. They talk as if they are in week 6 or 7 and they are only in week 2(of gameplay).

I am amazed that Rachel doesn’t get why everybody in the house targets her and Brendan because they are a “In a relationship” vs other people just paired up talking to each other. She has to be the thickest person I’ve ever seen.

Come on guys. There’s no question how the vote goes down.

It’s Hayden, Kristen, Lane, Enzo, Ragan for Matt to stay. Monet is out the door getting the love of the others.

This is the thing though, if things remain status quo, it’s going to be a total shocker to Rachel and Brendan. They think they’re in power and running the house, but they’re really ONLY sitting ducks.

you made a name after the brigade? really?

what have they done besides make a deal week 1?

get matt put up on the block?

What have they done? How about kept their alliance a secret? Very smart strategic move for the Brigade.

Brittany is a joke. She tried and tried to make a difference, but what she doesn’t realize (and neither does Rachel and Brendan) is that she’s never had a say in the matter the entire time.

The brigade has been running the show and continues to run the show. Four deep is too strong to conquer in this game.

GO TEAM BRITNEY!!! I aqree that an alliance of 4 is usually tough to breakup but these yo-yo’s are so stupid, they will turn on each other before their alliance is made known to the other HG’s. Hayden, due to his infatuation with Kristen, eventually will be forced to decide between the Brigade and her–looks like the Brigade loses everytime!! GO BRITNEY!!!

this will be the difference/the fall of the brigade…

hayden will follow kristen, not 3 guys he met week 1 and made a deal with…

its kind of disgusting how a majority of you prefer brit over rachel….I get it, rachel is annoying, she even said it, that if she was watching she’d hate her and brenden…but…I hate people who are fake and say BAD things about others…and brit is that person…

every year you want to hate the HOH of week 2, but LOOOOOVE a brit that will be handed hoh like she was POV…please

andrew will win the next HOH, but it doesnt matter really

why would you NOT keep b/r? I would because they arent playing a good game arent liked, you know where they stand…so leave them in the house….get rid of the others

You guys keep believing that stuff. Kristen and Hayden are the two that know each other. THey bpractically told it last week. Kristen will be WITH the Brigade in time. Heck, she practically is now. Root for who you will, but know the Brigade rules the house this season.

Think about it this way. Who goes up next week if ANYONE but Brendan wins. Rachel is one. If Britt doesn’t win, she’s right beside her. Andrew is the wildcard. Kathy is gonna go with the power–typical floater.