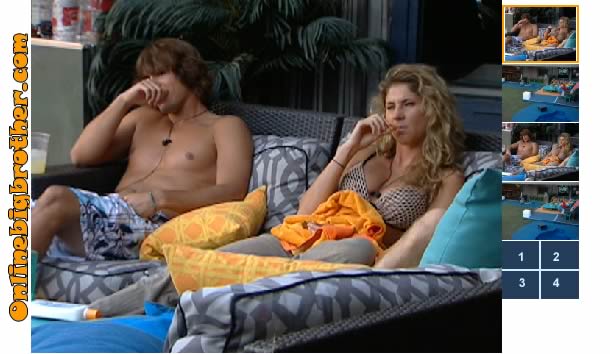 6:15pm Back yard couch Hayden and Lane Hayden doesn’t know what is going to happen he thinks they might put up Andrew but seeing as the ceremony is tomorrow she’ll probably put one of them up instead. Lane adds that if he wins HOH next week he’s going to put Ragan up. Matt and Kristen join them They are. Wondering if they will get any libations tonight. Matt says that people have to start helping him drink the white wine because drinking a bottle a night is killing him. Kristen says she’ll help him from now on. Throughout the conversations hayden and Kristen keep their distance. hayden gets up to play with his lasso. Matt says that tomorrow is going to be huge, Kristen tells them that she’s not going to play personally she’s going to play solely strategic.

6:28pm HAmmock Lane and Brit Brit tells him she hopes that Andrew will go up it’ll be the best case. She thinks Andrew is a great competitor and she’s confident that if Andrew goes up against Monet He will go home. She starts listing off things that Andrew is doing that makes him such a strong player. Lane mentions if MAtt goes up what does she think will happen. She tells him the only way to ensure Monet is safe is to put her up against Andrew. Brit is terrified about going to sequester she says she wither wants to go home early or win the whole game, going to sequester would blow “I would absolutely KILL myself in a room with these people”. Brit mentions that Kristen is following the power and whoever is HOH next week will be her best friend. Lane agrees but he still thinks she talks to Hayden. 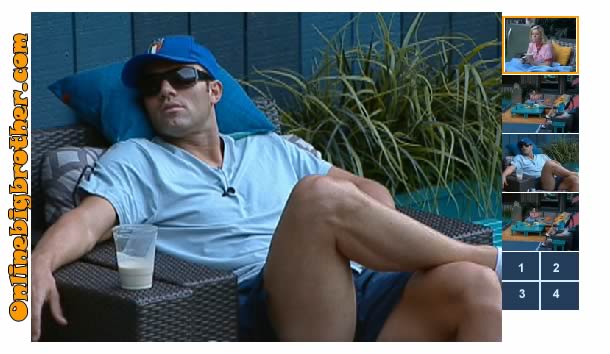 7:17pm Backyard Couch Enzo, Andrew, Kathy. Enzo brings up that he doesn’t want to win HOH yet because you have to put 2 people up and make 2 enemies. Andrew says “The game has started you know” Enzo says he knows whats happening. They start to discuss oh the week starts on Thursday’s while in the BB house not Sundays like outside. They mention theres nothing happening this week until Thursday and then everything goes to shit. …

Most the houseguests are walking around some are eating some are enegaged in chit chat. 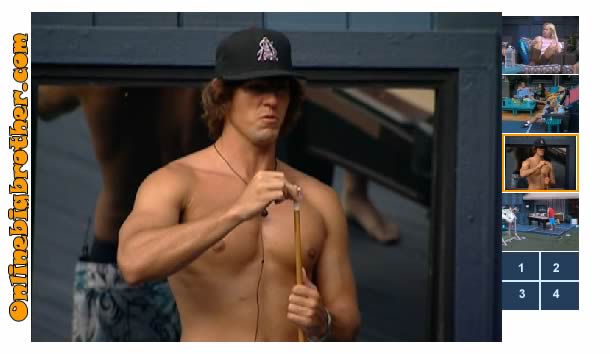 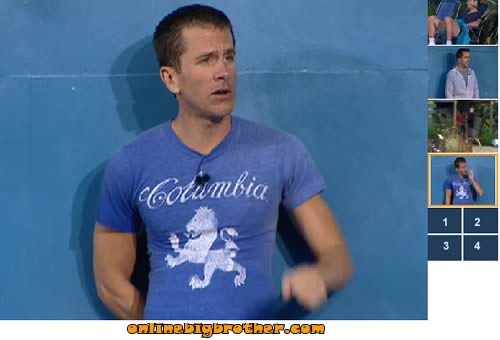 7:20pm Hammock Ragan and Matt Matt is telling Ragan about how he thinks it’s dumb/weird that Brendon is always talking about shit everybody in the house has no idea what he’s saying. “String THeory”..”Super Cooling what the fuck man” Matt says they all know Brendon is smart why would he talk like that it’s not helping his game play. Ragan says “Yaaa All i want to talk about is Pizza and Pepperoni” Ragan mentions how annoying some of the people in the house are. Matt agrees

i dont think hayden and kristen are over, they are trying not to make it seem obvious that they have a thing. They mentioned it last night that they were gonna do that.

Agrees! Hayden said he was going to distance himself (around others) to make it look as if they weren’t that close – or in an alliance.

ILL WILL
Reply to  stefi

Yeah they did. At least they are smarter than Roachel and pussyboi

Literary (under the covers)

I just have to say this. Is it me or does everyone here want to gag britney and monet until they leave? I have never seen such acid tounged little bitches in my life, especially britney. I hope her family is proud of themselves for bringing up such an entitled little princess.

Her Parents’s must be so proud.

Brit is annoying but she will have to get put on the back burning for annoyin brachel .I wish they would turn off the sound everytime they talk! while there at is turn off the sound when kristen and hayden speak 2.I turn the channel at least 6 times on bb after dark because there annoying. Snooze fest !

I DVR after dark and start watching about a half hour into it so I can fast forward when brachel are alone. Sometimes you would think they are the only two in the house. I was an hour an a half behind the other night and fast forwarded so much I actually caught up to being live because of all the screen time they gave branden and rachel. Give me a break they are so close and into each other after just one week? I don’t care if they live in the same house it’s making me sick. If it happened after a month then I could see it but after just a week? I just threw a little again :).

haha whoever runs the twitter/does ‘for the ladies’ pics of hayden WANTS them to be ‘over’.. they’re not over! how about a ‘for the guys’? gotta be more than 4 pics of rachel’s implants for us to see. even if they’re kristen’s bad boob job! hayden wants to pop them fake puppies!

haha good 1 kristen does look bad! BB should have bb 13 right away before all want to the fans get bored of the show and don’t want to watch anymore. There is fun. Andwhy kristen never smile? she is cold as ice

SORRY FOR THE SPELLING MY KEY BOARD IS A PIECE OF CRAP!

KRISTEN iS NOTHING TO LOOK @. Her voice is annoying , so is rachel, brendon , and hayden. They all just need to pack up and walk off the show! I’m just say’. Very boring bb ever!Every since kristen became notice on the show these last past four days I forget every thing she says.

Ha Ha, I agree, Kristen has a killer body, but she reminds me of that girl Jerry dated on Seinfeld, the one that looked good in the right lighting but was scary in the wrong lighting, lol.

Oh, that is true about a lot of us, Canadian Fan. Good to see you on here!

Thank you, Simon. I missed the end of last season with you all. Had to go to the hospital. But, I did watch it there. Glad to be able to be with you again. It has been so nice to have so many remember me, too. Thank you all for the nice words.

Glad to see you back BBGrandma! We are going to have fun again this year! Thanks again to Simon and Dawg for this awesome place to hang out!

Yes, Simon and Dawg are the best. Love this site. Glad to see you, too, Chloe.

Lol, Now Grandma, I bet you look fine in any light. How have you been, was wondering what happened to you, you dissappeared in the last week of last season and nobody heard a word from you, hope everything is ok with you?

Well, the dimmer the better. I have missed you, too. I asked about you the other day and Rockstar told me you had been looking for me. I am here now and glad to be. I hope to last the whole season. I will.

Well its good to hear you are doing well again, and yeah I guess we all look better in low light situations, lol. Im having a hard time so far, trying to get into the show this season, I think they should bring Russel back to shake that house up. Oh well it can only get better, I hope. I must shut this thing down and get some sleep, its late here in the maritimes and hot as hell. Later BBGrandma.

hahaha funny she does look horrible

Dude, Kristen used to be a man!

lmao she does look hairy as hell! GOOD 1.

Um, you do know that’s not her leg, right genius? She’s wearing pants.

now that is funny!! wouldn’t be surprised at all – LOL!!

You guys do know that Matt and Ragen are life long friends, right.

Did you know that ragen and Matt are life long friends?

Holy crap! First half hour of after dark and Kathy has not been vertical once! She blamed her poor lazy attitude on not being able to eat last week but she’s been eating now and there’s still no improvement!

KATHY IS MOUTHY AND ANNOYING. SHE TALKS A WHOLE BUNCH OF NOTHING. AND TO THINK SHE IS A COP,LOL

Got nothing to say, as it was the Rachel show again. Just sick. BB, made a big mistake this year, wow ! Hope there’s better day’s ahead. Brit is also in the camera all the time too.

I think that Kathy and Britney are mother and daughter

Rockstar
Reply to  another maritimer

Does anyone else think that Kristen/Hayden are the lifelong friends? I have a feeling they are either engaged or were just recently married.

I don’t think anyone knows each other. If Hayden and Kristen did know each other I think they would have spoken like they knew each other out on the patio. He was flirting with her. He was trying to hide his flirting. There is no way they had a prior relationship

I agree with you Rockstar! I think that was a lie made to have others paranoid. BUT.. Kristen and Hayden did “something” last night under the covers! If they lsat the next few weeks, I think it will be more obvious.

ILL WILL
Reply to  Rockstar

yea i thought brittney and kathy were mother and daughter both form the same state it said kathy has a 22 year old child, but yea nobody knows each other i don;t think any women would talk about their mother like brittney talks about kathy even if it was part of the game

It is possible that Annie may have lied about the lifelong friends to make everyone paranoid. I don’t know though Hayden and Kristen have been together the last few nights and I saw on afterdark last week where they looked like they were trying to cover up something…probably just an undercover showmance!