11:15am Hayden and Lane are in the lounge room talking about using Britney to get farther in the game. Lane says that if people think she is aligned with him, they will target them as a couple, put them up and the Brigade will vote her out, saving Lane and their numbers. They discuss how they think the best scenario would be to have the Brigade left in the house with Kathy, Rachel and Britney. Lane says for all this to work out, it has to start tomorrow. Lane says that he think Hayden and Britney have a good chance. Lane says that he cannot wait to see Rachel or Brendon’s face when the other goes. Hayden says that he wants it so bad after Rachel was such a bitch. They agree that if Kristen had stayed, she would have been the perfect foe for Rachel. Lane says that he thinks the HOH competition this week will be endurance. Hayden says that if Rachel and Brendon are telling the truth they are not going after The Brigade this week. They start going through the votes and how many they need to keep the Brigade safe. They both think that Kathy is going next week, no matter what. Hayden and Lane say that they think the first Brigade member out would probably be Matt because he just wouldn’t have the votes to stay. Lane and Hayden make a deal that if either of them is up against Matt, they would vote to keep each other no matter what even if Enzo wants to keep Matt. They both say that they will lie to Enzo, to save each other and that they can sort it out later. Hayden leaves the room for the kitchen. Lane rolls over to go to sleep.

Get the 24/7 Uncensored Live Feeds For Free!! With No Commitments!
3 Day FREE Trial 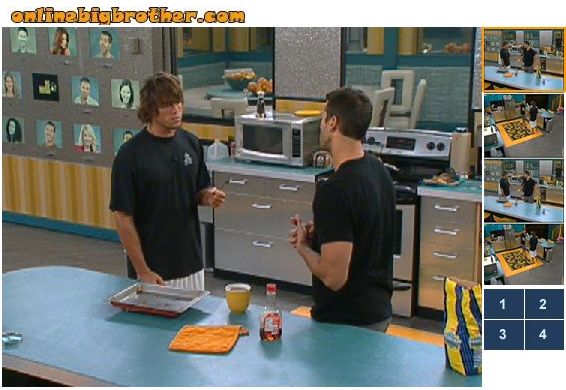 11:50am Hayden and Brendon are in the kitchen talking. Brendon asks Hayden what she (Kristen) said. Hayden says that she just said that she doesn’t want him to be mad if she is campaigning. Hayden says that they stayed up late last night because they know that one of them are leaving. Britney, Hayden, and Brendon head up to the HOH room but the door is locked so they sit outside and Britney and Hayden play checkers. Rachel is trying to bleach her hair lighter in the bathroom. Rachel opens the HOH door and Brendon goes in. Brendon kisses Rachel and then tells her that he loves her. Rachel says that he shouldn’t be so nice to her. Brendon says of course I should I love you.

12pm – 12:20pm All four cameras are on Kathy and Kristen getting ready in the bathroom. Lane and Enzo are in the lounge room talking. Enzo says that she (Kristen) was trying to talk game to him last night and he was falling asleep. And then he woke up and said yeah I’m a do it. And she was like what. Ezno says oh shit. Then she would start talking game again and I would start falling asleep again and wake up and say ohhh..yeah Im a do it. She asks do what? Enzo says Im gonna make eggplant parmesan. Enzo says she was like what?! Both Lane and Enzo laugh. Enzo says that he was losing it yo. Enzo and Lane start making fun of Kathy. Lane says that at least they have their ass covered with Kathy because as long as she is there …shes the target. Enzo says that he doesn’t trust Ragan. Lane says yeah. Enzo leaves the room. 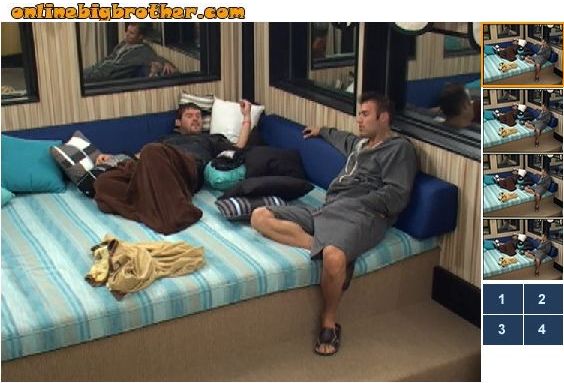 
12:30pm – 12:50pm Enzo, Britney and Matt are in the kitchen.  Rachel yells down from the HOH balcony asking Britney and Matt will wear her hair extensions again for the HOH pictures.  They both say that they will.  Britney asks when the HOH pictures are going to be? Rachel says in a half an hour.  Britney says that she is going to take a nap until then.  Britney goes to the bedroom where Ragan and Matt talk about what the up coming HOH competition will be.  Ragan says that he really hope that it is an endurance competition.  Matt gets up and goes into the lounge room where Enzo and Lane are talking.  Enzo says that he doesn’t want to be in the pictures at all and wants her to take pictures of everything else, including the fish and food they eat. They talk about what they think the HoH comp will be like.

so they will be farting in a room together…wow thats fun.

They have to fart to hide the click when they pull the clip on the grenade.

Hey bbGrandma, you get my email?.. everything is cool don’t worry you’re awesome

brendon don’t really love that ho, he says it WAAAYYYYYYYY too much

brendon is pussy whipped. I think rachel busted his cherry and now he is love sick. she oviously doesn’t feel the same way and is getting sick of his clinging to her and saying the l word every other sentence. 🙂 they will be at each others throats next time rachel gets drunk. she will crush his balls and he will leave the show LOL

Wouldn’t it be fantastic if he is acting and throws her out?

Seriously, how many times has he said he loves her. Has she even reacted anytime he says that? He seems like a nice guy…wonder what his ex’s would say!

the brogade is full of judas. hayden and lane say they will lie to enzo? dah. so much for a loyal brogade.

Do you get that only 2 people can be in the final 2? dah indeed.

thanks for sharing moaner. I did not know that. Gee guess I am not as smart as you are ( or as smart assed 🙂

right, and these idiots still talk about being 4 deep in the jury…what will the other 2 think when they are cut out? I say they screw em over and its a brigade with a brit or ragen, and guess who gets the votes?

Yo
Reply to  Simon

One going left and one going right, YO!

I dont know why people are calling Rachel a HO…………….. She is who she is and she speaks her mind and she is beautiful. Women that call her a ho are jelous and men that do are jelous also.

I for one definitely don’t think she’s a ho. Do I think sh’es trashy? Of course, she has trashy make-up, trashy hair, and a trashy britney spears circa 1998 wardrobe. She has sex and sucks cocks on national television of course she’s trashy. BUT I couldn’t care less a

Shes way to fake and way too over-the-top. Maybe if she tried to be herself, without yelling at me everytime she steps into the DR. LIKE HAAAAAAAAAAAAAAAAAAAAAAAAY. But then again the live feeds show how much of a two-face she is without the CBS editing. Eveyrones got an opinion, especially if you’re going to be on TV.

Are you kidding? Rachel is nasty looking. That face and messed up skin, probably has pimples all over her butt. She is a perfect example of a woman with decent sized melons that I wouldn’t want to ever see topless.

You know you’d like to see her topless. You’d date her if you had the chance. Don’t be a fibber.

I am terribly jealous of her………..you got me!!!!! I want to be seen EXACTLY like her by millions of people……She is so beautiful, smart and kind……..I am ashamed of myself now. Thank you for helping me realize the errors of thinking.

I did – but I thought it would be just too mean…..I DO appreciate your doing it, though…….

bahahahaha well put, and yes..be ashamed. It takes a lot of time, and money to look that cheap. 🙂 lol

many of proof that she is a ho…. 1. sleeping with a man she just met. 2. admitting to getting expensive shit bought for her by men she meets at the bar she works at(non of that comes free). 3. the way she dressed around the house. damn right “she is who she is” a HO..NEED I SAY MORE???? nobody is jealous, we call it how it is and not make up shit to cover the obvious

Nice girls don’t have sex with strangers on the world wide web.

i agree with yuh all these bitches are jealousss

Of course – I believe that Rachel’s only POSSIBLE redeeming quality, at this point, would organ donation and I am not even sure that I want those…………………

Women can speak their mind and be who they are without being skanky…..Rachel epitomizes all that is wrong with women and I really think that Brendon is about to discover that he is, in fact, gay!!!!!! I am surpised that Ragan has not used his gaydar to get this one out and about…..

exactly, i know plenty of women most older who speak their mind but they are also very respectable of themselves

What’s the diff betw ho, skank, or trashy? I don’t get these people who say BG is not a ho. SHE knows she is so you really just need to accept reality. Why do you think she tells B to not be so nice to her? To ease her ho-guilt!

so lets see it’s team brigades vs team bren-rach? I think I will pass on siding with a team this year. go britney though. you deserve to win.

For sure. The Brigade is so underwhelming. Enzo and Lane are hilarious but useless game players. Hayden is a dumbo and Matt is a moron who thinks he’s smarter than he is. At least Brendon and Rachel actually win stuff. But man they’re so annoying they make April and Ollie seem semi- bearable. Ok maybe not. Definitely TEAM BRITNEY all the way baby!

Ditto Mel, I think Roach is a bust on this site:)

Hmmm I’m not sure what i think about the final two between Hay and Lane, I mean outta the stupid brigade, I guess I’d prefer them. But Brit and Lane sounds better.

Rachel is unforuntately safe with them it seems. Which doesn’t make sense. They are so keen on getting Brendan out, yet is ratchel who is winning the HOH’s and always talking game. I guess Brendans got the POV luck, but still… I dunno. Brendan seems kinda dumb to me, well…geez they’re both kinda dumb. ugh… how are they a threat again?

Good thing Jeff isn’t in this alliance. He throw a cow,when he thought Russell had a final 2 alliance with Michelle.

Rachel says Brendon’s name way too much. It is extremely annoying. “me and Brendon”… “I would never do that to Brendon”… “Brendon!”

BBGrandma
Reply to  The Excitement

Maybe she needs to keep reminding herself who she is with now. I use to call them “Sweetie”, “Handsome” or “Honey” just so I didn’t mess up.

Rockstar
Reply to  The Excitement

so Judith, you were a virgin when you got married? really?

Okay i can see the brigade falling apart at the seams…Lane & Hayden just made a final 2 deal…WIN SOMETHING FIRST THEN START TALKING ABOUT THE FINAL 2!

I like Rachel… I don’t like the showmance. I can’t stand anyone else. She is up front, herself (unlike Brit and Matt and others) and she can win comps. Her laugh makes her seem ditzy but she knows what she is doing… i wouldnt’ be surprised if she made it to the final two… so long as she got rid of the baby/whinner/pathetic Brendon.