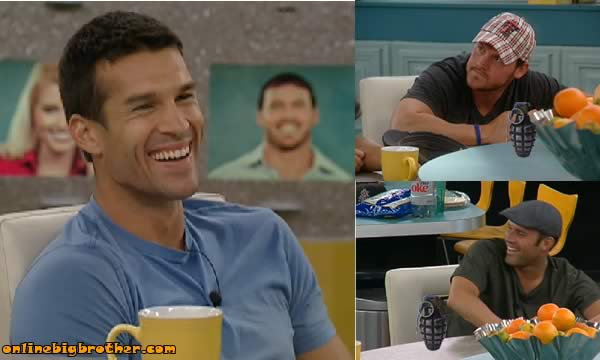 
10:00pm Kitchen, Brendon, Enzo and Lane There talking about the HOH cmp and what parts were harder for them. Enzo really playing up the fact that Lane did so well even though he a Bigger guy. (Last night Brendon said otherwise) Brendon is big time complaining that the HOH competition was bullshit because the ledge was less then 6 inches, he wants there to be a HOH contest that a bigger guy can win. Enzo and Lane laughing hard. (every second word from Brendon is fuck every second word from Enzo is shit) Brendon says all the little people in the house were saying that the competition was geared for tall people but thats incorrect because there centre of gravity is higher.Lane brings up how badly Hayden was hit with paint, enzo calls him the silver surfer.

10:00pm Cabana Room Rachel joins brit, ragan, matt, kathy and hayden. She says this
“wouldn’t it be cool if we get botox shots we could have a botox party” Conversation revolves around botox and teeth.

11:00pm Lane and Enzo Jumanji Room They start talking about next weeks HOH, Enzo says jokingly that if it’s lane and him left he’ll cut a deal. HE offers Lane into a secret alliance that Enzo made up called the BRigade (yo). Enzo is laying in Matt’s bed says “Why does it smell like ass in the cave” (Matt’s Gremlin cave). They start laughing at KAthy for asking them all to promise them if she falls she they won’t hold it against her. Enzo says if anyone would of tried to convince her to stay on he would of cold them to shut the fuck up.. he was dieing up there he didn’t want to be have nots though. Production come son the PA tells them that the storage room is open they rush up to find out no Alcohol.

Why is everyone making jokes about Alison Grodner? Did I miss something?

bottle that and make a perfume, ok? At least there might be some payoff.

Why BRENDEN is a good guy

1. He is amazing to Rachel even when she is angry at him.
2. He wants to protect Rachel more than save himself in the game
3. While everyone talks nasty (personally) about him; his talk is game talk (Lane-too big, Matt-not athletic)
4. Although everyone treated Andrew like the weird/odd one; Brenden treated him like the human being he is.
5. Even though he knows Kathy is against him, he went into the have not room and made a bed for her…and put her monkey in there.
6. Everyong sits around and from the first day wanted him out and at the same time they eat the food he makes.

He is a good guy and the others are mean and nasty.

goofy
Reply to  Why BRENDEN is a good guy

LJ
Reply to  Why BRENDEN is a good guy

You forgot one…..He’s HOT! At least at this time of nite I start to think so!

But the lights are still on in the bar.

At face value, he doesn’t need to lights to go out. Looks alone, he’s hot .. with or without lighting.

So he’s a hot pussy. He should get that checked.

randomness
Reply to  Why BRENDEN is a good guy

it is the real world. just different. its times such as this (living in that house) that shows who a person really is.

he deserves to stay.

Ryan
Reply to  Why BRENDEN is a good guy

Why I think Brendon is NOT a good guy

1. He is arrogant and egocentric. He actually thought that he and Rachel could ensure their safety this week by bribing the HoH with the $5000 that Rachel won in the PoV comp. They claimed that while they (Brenchel) are not stupid and greedy enough to take a bribe, the other houseguests are.

2. He is a poor sport and a crybaby. If he loses a comp, he whines and complains for days about how he was out of his element, he was at a disadvantage, he deserved to win, it was rigged by production, etc, etc, etc. He conveniently forgets that he has won 2 PoV’s, so at least 2 of the comps were in his element.

3. He is a self-righteous hypocrite. He made Enzo swear on HIS DAUGHTER’S LIFE that he would not nominate Brenchel if Enzo won HoH. Yet, he preaches about honor and fairness. At least the other houseguests (particularly Matt and Britney) acknowledge that they are playing the game without their conscience. Brendon is just delusional.

Ugh, Brendon is so damn whiney!! BB’s next competition should be: Big Brother’s Ball hunt – first person to find Brendon’s balls wins! He needs to grow a pair and stop acting so damn emotional.

The talk with Rachel before BBAD went off the air was amazing. This guy still hasn’t caught on to Rachel’s life style. She is young and likes to party. He needs to learn more about her and she is sharing. I don’t think, Rachel, he can handle you.

Precisely. He’s a boy in a man’s body.

The really sad thing is, if Brendan wins POV, he will remove Rachel instead of himself. He is seriously ” whooped”, as we say in Texas.

I’ll use your mom’s as soon as she’s done with her shift at the drive through window.

I thought it was pretty damn funny. Brendan needs to find his balls.

You say wishful when you meant to say “idiotic”.

Curious … did the site crash several times tonight? Was it my connection or too much traffic?

ok .. maybe in your world. But to those outside your world, same question applies. Just wondering if we need to do a big support this site kind of thing to prevent further glitches? Or .. was it really my own IP provider?

Mines been ok and I have been cloggin it up! I need to write Simon a check on friday!

Me too. But for about 2.5 hours I had a hard time reaching the site, and if I did, I couldn’t post at all. Error messages all over the place, sh*t timing out and resetting, etc.. I figured they must have been getting bombarded because of tonight’s show. I remember it got BUSY at the end of last season, but thought Wow! a little too early on for this season.

Peeper, mine was erroring, too. Said link was lost. I thought it was that my laptop was getting warm. So, I turned it off and set it by the fan. When I turned it back on, it has been fine since. But, maybe it was all the traffic.

I had the same problem right during the HOH competition around 9pm until 10 pm. You aren’t alone.

Why do they have to zoom in on her pimples and why the hell is her chin always full of them? And lastly why is Brendon always suckin’ on them! Im going to hurl!

I should have said “whiteheads” cause it’s not the pimples its the white tops…..she’s always lookin in the mirror, doesn’t she see them! Take care of that shit! Dear BB Diary room requests: Can I please get some proactive ?

If the guy really loved you, he would pop them for you.

Yeah Simon, whats the hold up with Lane’s pic, is there going to be some $500 contest? Why keeping us in suspense….not like you are busy or anything! Ya know…changing everyone’s posting names?? WTF??

Put a deliverance pic up for lane. Or a pic from those guys out spotlighting in the Crocodile Dundee movie.

Thats what I said yesterday……I dont think my link went thru tho…..here it is again!
Oh forget it, I cant find the pic now!

Big Brother brings out the real YOU…. brendon is a PUSSY, who gets too emotionally attached to women who don’t deserve it, ill bet any money he falls for women like rachel all the time, he don’t know no better, just like when women seem to get attached to bad men they can never give a honest explanation why.

Ok people I have been dying to skip working and get on here to post. Last night had major issues getting on so I had to get my fix elsewhere (Sorry!) the other sites aren’t nearly as good as this one though.

Anyway, now here’s what I’m thinking, I don’t believe Matt will put up both Rachel and Brendan. Something weird is going on with him. I think it’s a far gone conclusion Kathy is going up and then some other ‘alleged pawn’ with the intention being to attempt yet again to backdoor Rachel or Brendan.

It’s gonna backfire though because CBS Production will make every effort to keep the drama duo (Rachel and Brendan) in the house until the very end. Yep, you heard it hear first, one of the two of them will win POV.

We got hammered last night like never before.. thanks for coming back 🙂