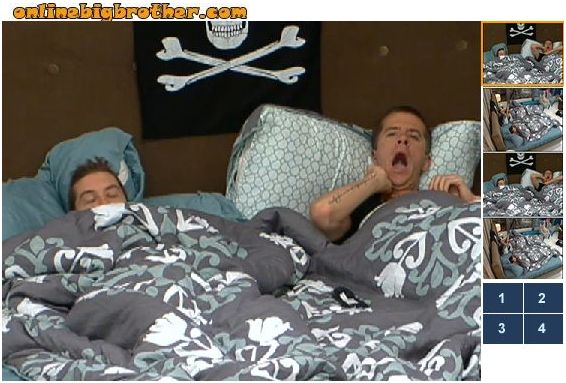 9am Big Brother wakes up the house guests. Up in the HOH room Matt and Ragan are talking game. Matt says that Hayden and Enzo won’t care if Brendon wins HOH because Brendon wont put them up. Matt says for Ragan to be safe he or Britney need to win this HOH competition. Ragan says that he wonders what would happen if Kathy wins HOH. Matt says that would be crazy and he would deserve to go home for not even entertaining that possibility of her winning even just a little bit. Both Matt and Ragan think that Enzo and Matt would be put up if Kathy won HOH. Ragan makes fun of Kathy saying that she took one for the team when she was the first one to jump off in the HOH competition and got to be a have not. Ragan says that he thinks Matt would have votes from him (Ragan), Britney, and maybe Hayden and Lane, but that he’s not sure. Matt doesn’t really say much. Ragan says that he is nervous about having to win HOH.

9:30am In the bedroom Enzo, Lane, Hayden and Britney are talking. Enzo says that his bed smells like a nut musk with a side a BLANK curry. Lane asks him why his bed smells like BLANK …did you BLANK in it. Enzo says yeah I think I did. They start talking about what the HOH competition will be like. Enzo says that it will definitely be a little brutality and genitalia. Britney asks him what if it isn’t? Enzo says that it would then be some nationality and personality. Then Enzo starts rapping. Hayden, Britney, Lane are all trying to take a nap now. All four cameras are on them sleeping.

10am – 10:25am Matt moves some of his stuff out of the HOH room. Then he comes back up and climbs into bed with Ragan. All four cameras are now on Matt and Ragan in the HOH room.

I guess Ragan was right, stinky, rotten cheese wouldn’t make a difference if that is how the beds smell. NASTY.

I am the saboteur
Reply to  just a thought

My sabotage suggestion was to unplug the refrigerator and let everything spoil and stink. Most of the suggestions online were stupid, or recycled from the first sab.

If there was ever a limit to how gross Enzo is as a NeanderTALL those comments pretty much set it to a new high. You are GROSS Enzo, stop breathing the same air as other decent human beings ::grabs rolled up newspaper:: Is Matt and Regan really sleeping in the same bed? As a gay man that is cute but I question their ‘game’ by showing just how comfortable they are with one another to the other HGs.

Thanks Watcher & alrm121 for saying what i was thinking! Why IS Ragan sleeping with Matt? (i swear they look related) -without going into the obvious homo-erotic scenarios —- i’m curious why the Brogade seems to accept that seemingly close connection.
I swear if i had the HOH room i would keep it locked, sleep alone, and only open it for parties then kick people out (nicely-claiming wanting to read my letter again) when i wanted…. and i sure as hell wouldn’t let people hang out in there without me if i was hiding an Effing DIAMOND VETO Blingtastic necklace!
So what IS up with the buddy sleeping arrangements!?

Just wondering…would anyone think that it would be odd if two girls were in the HOH room sleeping in bed together (in a non-gay sense)?

just a thought
Reply to  Alexis

Yes because they are all essentially strangers. I could see good friends sharing a bed. I shared a bed with my friends as a girl when I slept over, but I don’t think boys typically do that, but I could be wrong.

I would not sleep in a bed with another and and I certainly would not use the same comforter if I did.

Why are Matt and Ragan sleeping in the same bed all the time?

I am wondering if Matt and Ragan are not the pair. They act like lovers…Matt always with his hands down his pants especially around Ragan,,hmmmmmm getting me to thinking.

you’re thinking about man love too?

Oh for God’s sake, they don’t act like lovers! The act like friends- two men can be friends without sex just as two women can. Tired of hearing the Ragan-Matt gay talk. Grow up people

Then why doesn’t he get off his lazy ass (Enzo) and take the sheets off and wash them. Oh because fixing the bed back up is too much effort? He’s so worthless. They need to get out Hayden, Lane and Enzo cuz the whole house loves them and if they get to the final they’ll win it all. Boy these are a bunch of dummies. Keep Brenden to the end, odds are no one will vote for him to win the $500K other then Rachel. Stupid is as stupid does.

Should Kathy tell B/R about the plan to vote out Rachel? It would get her on their good side and they can just say the Sab. said it. It would be a pretty risky move.

I think she should. Just in case Brendon wins HOH, that info could save her from the block.

if they were REEEAAALLLLYYY smart, Britney, Ragan and Kathy would align with either Brendon or Rachel (whoever stays) and then one of them becomes HOH this week and puts two brigade members up- getting even one brigade member out would tilt the votes in their favor and dismantle the brigade’s dominance in numbers…this is their only chance to win —- but they are playing a too personal game that is keeping them from seeing B/R as anything more than attack points and then using this rivalry as some sort of house bonding force that is ultimately keeping them too close to the alliance that is about to push them out one by one

just a thought
Reply to  tinydancer

You are spot-on tinydancer! They cannot see past their own petty noses at this point, they are joined together by their common enemy. Meanwhile, the real enemies are sitting there laughing their asses off and using each and everyone of them. It’s going to be a rude awakening one day. I am not a brigade fan or true hater, I fall in the middle. I do have to give them props for pulling this off so far.

Yes, that would be smart, if they knew the brigade existed.

I am the saboteur
Reply to  Beerad

EXACTLY! If they KNEW the Brigade existed, then they would be complete idiots for not putting up two of them. The most dominant “known” alliance is B/R, which also happens to be the two most annoying people in the house, so they go first. The next few HOH’s will start targeting the other known alliance pairs… Ragan/Matt and Brit/Lane, with the Brigade controlling the votes for their hidden alliance.

i know that it isn’t the easiest thing in the world to figure out the brigade and that we at home are privy to all sorts of info that they aren’t BUT – they have nothing else to do in there, they are in that house 24/7 – they have all the time in the world to stop, think and OBSERVE what is going on – like gee why doesn’t Enzo ever get mentioned for nomination? why didn’t Hayden have to campaign? enzo is running things and he is so good that he is seeped into everyone’s subconscious and they need to wake up – if Kathy weren’t so useless she would really try to figure out why all she is ever good for to anyone is to be put up as a pawn. The problem is that they (Britney, Ragan, Kathy) have in essence stopped playing the game. They are spending so much time talking about B/R and scheming against them (they who are LEAVING) that they aren’t thinking about how to win and observing and trying to eavesdrop. It’s frustrating to watch bc bottom line this is a game for money and you just know that when they all watch this back, they are going to kick themselves. But I guess this is one of the pitfalls of Big Brother, and those who overcome are the ones who deserve to in.

I meant “deserve to win”.

I think its the first Gay Showmance on BB

I have NFL preseason on in my area during tonight’s episode, anyone know how soon the episodes are available online?

At one point, I thought that Matt and Ragan may be related since their head structures and body frames are reasonably similar.

LOL! I’m not Simon, but I think that is the rule, LOL!

opps missed that one.. Yes for sure everyone DRINK!

(I think CBS should of done a secret pair this year look at all the fun we’re having from Annie’s little SAB lie.. pretty much the only cool thing to come out of the sab twist this season )

Here goes for a full-on drink…. Matt and Ragan are related. It was not a lie by Annie. When Ragan won sabo II, part of the way that BB got him to agree was they said, “hey, we are going to tell the next sabo that there is a pair in the house, again….either you agree to be sabo, or who knows where we go with the info!”

And drink 2, I like when you misspell “personal” as “personnel”, it always makes me think about how BB contestants are really employees (personnel) of Allison Grodner!

Excellent! I finally caught up to this post and now I get to do a double!

It’s 2010 people everybody sleeps with one another. The walls have all come down..lol Besides, none of the girls would wanna sleep in Matt’s testes tainted bed with him, so who better than a guy who likes the smell of balls? I really don’t care. Ragan’s gonna be the one who pays the price when he finds out how expendable he is. Talk about false sense of security.

just a thought
Reply to  Simon

Now that would be worth watching.

That would be PERFECT. That, or he gets so heated he physically assaults another player and gets booted.

That would be even better!

Yeah, but if Brendon does that – folllows Rachel out & essentially quits – then he WON’T go to the jury house w/her. Only evicted players go … not walk outs

Pathetic scene on the feeds right now, Rachel falling to pieces, Brendan rocking her in his arms on the edge of the bathtub. I just lost my breakfast. All four feeds on them. Please show us something else. This is sickening!

Rachels breathing at times sounds like Darth Vadar. Time to cruise what I missed I can’t stand the feeds right now

Matt and Ragen in bed all of the time. Is Matt a switch hitter?

Rockstar
Reply to  MATT IS GAY

nah, Matt’s wife likes gay guys and Matt can relate to Ragan. Matt was an outcast all his life.