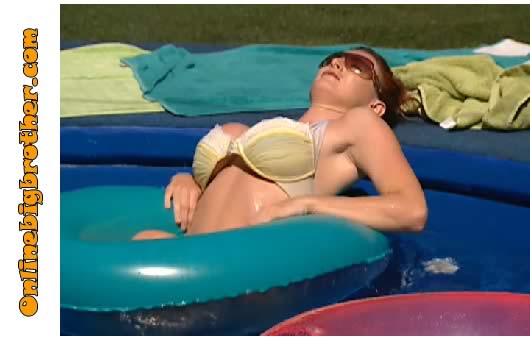 3:20pm Rachel my dream job would be a science show called “Sexy Scientist” maybe a PBS show or somehting with CBS Kristen wants to be a fashion show host.. like “What not to wear” Rachel says “OH my GOD you would be perfect for that… you can show off your own fashions” Hayden wants to do something regarding sports, “hopefully with CBS”.. (it’s the same thing we see every year the houseguests think that now there on Big Brother all these great opportunities will come up. If the past s any indication unless their as big as Jeff/Jordon the best they can hope for is a web show and to be guest bloggers on some website) 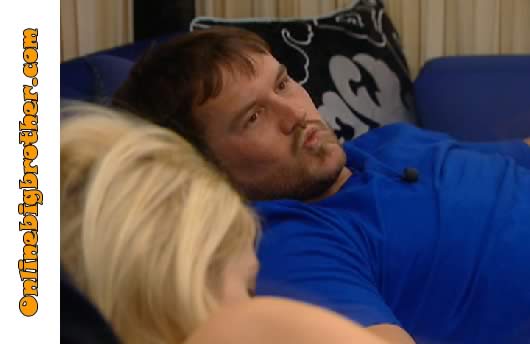 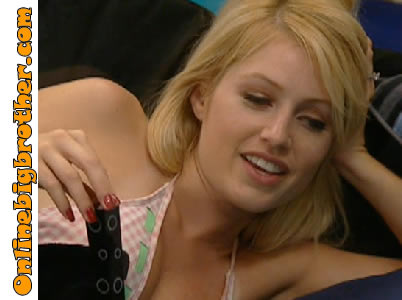 3:25 cabana Room lane, Monet and Brit Mild bashing Kristen about her botched boob job. Brit brings up she probably was pretty flat chested before so she probably looked worse before, Brit says that Rachel has a very nice body but it’s just a weird shape. Monet thinks her chest looks pretty bad but probably better than before she had them implanted. Lane mentions that her eyes are kinda fucked up “She’s always squinting” .. Brit wonders if Kristen is going to cheat on her boyfriend with Hayden. Monet doesn’t even think that she has a boyfriend because she’s so weird about it, “never talks about it and got really mad when people were asking” They go back to talking 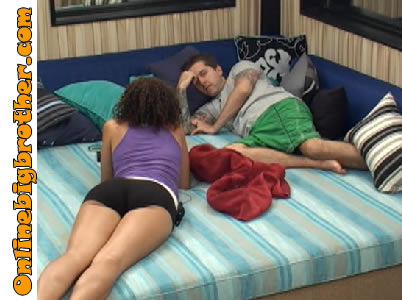 about bars in texas.. listing off a bunch of bars and the music they like. Lane leaves and they start talking about how they are going to get Hayden onto their side.. Monet lays out her speech, She’s going to pull him aside and say that Matt is a better competitor and Hayden would get farther ahead if he kept monet around. Monet knows she has little chances to stay in the house but she’s going to try her best. She decides it’s no use being nice to Rachel until after Thursday, Brit don’t bother she’s not doing to do anythign for you either way. Matt joins them and asks Monet if she’s done the diary room session yet and she says no “What are they trying to do wait until your all fired up.. they should of called you in right after the ceremony” Monet “no cause then i would of just cried”.. Brit leaves and they talk about how shitty it would be to be the first person in the jury house being so close and then having to sit around until the end. Matt asks if she gets her money right away Monet says no they give me the 10grand and the stipend after the show. Matt “tahts shitty” Monet explains to him how she doesn’t plan on being fake nice to rachel anymore.. matt says theres no point. They start talkign about the amazing race and surprise surprise they all plan on applying for the show.. (every year the players in BB talk about being ont hat show now more than ever because Jeff and Jordan were on it last season)

3:50pm Kitchen, Andrew, Lane and Enzo is cutting up fabric making some kind of outfit He’s cutting off the sleeves in his shirt making bandannas out of the sleeve and giving one to Lane and himself.. He keeps talking to himself Brit joins them “You’ve cracked Enzo” , Enso says he doesn’t want to sleep anymore he just wants to eat he doesn’t want to work out he wants to start smoking cigarettes… its about to get dirty in here”..”i’m about to start making gangs..making shanks with toothbrushes” Andrew tells him this is pretty much like a prison. Enzo stats making jokes about himself cracking “I’m going to fucking start cutting my flesh… stat painting my body with war paint.. i’ll be camouflaged and sucked against the door no one will see me” hayden walks in and everyone laughing there shit off (It’s funny as all fuck if you have the flashbacks dial it in 3;50 all 4 cams)

If you want to laugh go to this blog it’s wicked https://bitchybigbrother.blogspot.com
Leave a comment and say Simon sent you you’ll laugh I promise.

I REALLY hate how she always looks at the camera.

She makes me ill.

they wasn’t lying when what they said about rachel

the way pussydon acts it’s obvious he bought a few ho’s in his lifetime thats why he clicked with her so well after being turned down by annie of course, just lookin to get some ASS in the BB house, and rachel is his only chance, butr he needs to relaize she a vegas girl she gone drop him like a bad habit soon as they get out the house

Oh, I don’t think Rachel will get a show on PBS unless she wears her underwear. I think that is a requirement on that channel. Maybe she might be able to get one on Showtime. They would prefer she not wear her undies.

I love how Rachel brags about how she is going to turn the show on its axis and America is going to be blown away by her nomination, and yet she still puts up Matt. Rachel truly is an idiot and far from the mastermind she claims to be. I was rooting for her and Brendon in the beginning but now I can’t wait for her to be gone and let him play his own game. I would love it if she was stuck being the first person in the jury house.

ILL WILL
Reply to  Wojo

Eventhough Monet lives less than a mile from my house, I hope that she leaves on Thursday. What a disappointment, I was really hoping to be cheering for our first local reality TV castmember, but instead – I am embarassed.

She has a big chest, we get it….You know all the other girls with implants on BB, never made the point EVERYDAY! to say “look at my boobs”, figuratively speaking…She ain’t that hot, even for Vegas standards, she is the middle of the pack in that city….

Hey Simon, thanks again for the doing the site this year, once again we are on the same page. I just love your added comments. Out of all the BB”S this one just plain sucks. I cant even believe that I am even saying that since I have watched the show since the first one. We waited a whole year for this? I hope they go back to doing two a year cause this is bad.

There is nothing sexy about Rachel what so ever.

Theres breast implants and then theres Rachels. When you go that big you know theres somethin rotten in Denver.

Is Denver the name of her vagina?

Simon, that bitchybigbrother is very funny, thanks for the heads up on that! Damn, she’s got a point about Kathy doing f%@& all so far…. why is she in the big brother house? I really think she’s got a family relationship going with Brit.

Yeah thats a funny site, I’m glad you like it to.

I’m still undecided about this season-but I think Brit is hysterical! Her one liners are classic. Rach and Bren have serious issues. Being that in love and upset over difference of opinions after 2 weeks????? Really, what is wrong with these people?

Just remember, familiarity breeds contempt and these two are off to a fast start this season. They may end up hating each other soon.

I’m afraid that Rachel will outlast Brenden-she doesn’t play as emotional as he does.

If Brendon gets evicted in the next 2 weeks, being with Rachel will be his undoing….Hayden feels threatned by the guy, Lane, Enzo, Matt, and Britney don’t trust him because of his assoication with Rachel, and he is physically, a decent player….If Rachel goes, it will open up Brendon’s game, and he could be there for awhile…

True-but Rachel would have to be evicted. If they just “broke up”, that will be Brenden’s undoing.

ILL WILL
Reply to  Sophie

i give it a week or 2 she will be gone

Sophie
Reply to  ILL WILL

I have to agree with you that her decision certainly didn’t turn the house upside down. She let the others make her choice. And, why she ever thought that anyone she pick was saving her and Brendon from being put up shows she isn’t thinking past herself. They are prime targets now and no one is going to protect them but each other. Get real girl, you are going up again.

Is it bad that I think that the Rachel without makeup looks better than Kristin? And no one in the house has hips… not sexy. Anyways why is it the men see an a$$ shot of Rachel before Monet?!?? I mean C”MON!!

I agree. Rachel w/o make up is pretty cute.

ILL WILL
Reply to  SDFU

monet has a nice ass

I am really confused by the Brenden-Rachel thing. I know some hard core BB watchers don’t like the nice people, but I like to see good people do well, a la Jeff and Jordan. Brenden seems genuinely nice. It’s not an act for him, and I just don’t see what he sees in Rachel at all. She’s soooooooooo insecure, which is why she does all the weird, “sexy” things she does. He has so much more going for him. Don’t get it??????????????

I think they are both insecure! Have you seen the arguments the last 2 nights in a row on 24/7?
Neither one of them like being wrong & as we all, neither one likes it pointed out.. The first night Brenden was upset, last night Rachel was upset.
I do think they got too serious too soon. They are seeing now how each other handle stress & it’s possible that one of them may not like how stress is handled. I do think Brenden handles it better, but he makes decisions on his emotions to quick and Rachael over analyses things too far ahead!
They are a huge target & now they have to try to protect each other! It’s just too much too soon.
You do know that there are 2 showmances: the other is Hayden & Kristen, they are sneaky though, you have to watch them after Showtime goes off & they are in the bedroom. Then the snuggle.

gah how awesome would it be if Brittney won HOH? I think we would finally see some fighting.