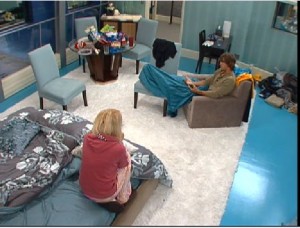 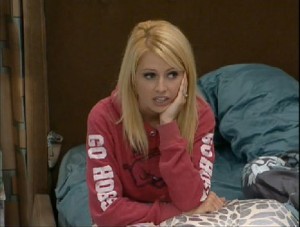 10:50am Britney heads up to the head of household room to talk to Hayden. Britney starts by telling Hayden that Brendon is planning to come after him (Hayden) next week.  Britney says that Brendon said what’s good for the house isn’t necessarily good for me and that he said it was stupid for Hayden to put him up. Hayden then tells Britney that Brendon was trying to convince him (Hayden) to put up her (Britney) and Kathy for nominations.  Britney tells Hayden that she thinks the best move is to just get rid of Brendon and that it would be terrible if Brendon gets off the block. Hayden asks if Brendon comes off will Britney vote the way he wants.  Britney then promises she will vote how Hayden wants. Hayden tells her that either Rachel or Brendon have to go.  Hayden then tells Britney that a pawn has to go up so that it ensures that either Rachel or Brendon goes home.  Britney says if Rachel wins she’ll taking Brendon off and if she does that she deserves to go home because it would mean that she doesn’t actually care about the game, she just wants to be on TV.

In the spa room Kathy and Annie are talking.  They’re talking about how the Brendon and Rachel showmance needs to be broken up. They both agree that it would be disrespectful to go against what Hayden wants. The talk then turns to Andrew and about how difficult he makes it to know what they need to keep kosher because he only tells the house after the fact because he doesn’t want to complain. 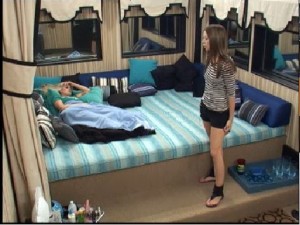 Back up in the HOH room, Hayden asks Britney who she is closest to in the house and Britney says she is closest to Lane and Annie.  Britney wants to be allies with him (Hayden), Lane, Britney and Annie. Hayden asks her what she thinks about Kathy.  Britney tells him that she doesn’t trust her after she spoke badly about her.  Britney says she will never show her that she doesn’t trust her though and that they still hang out. Britney says she doesn’t want to start a fight. Hayden thanks Britney for telling him what she heard and that her doing it builds trust between them. Hayden says its hard because he doesn’t always know what’s going on downstairs. Britney says they will be very strategic about the HOH next week, and that it has to be Andrew and Brendon that go up on the block for eviction.

Worst season of big brother ever!!!

ILL WILL
Reply to  Mbb

for real? i thought last year was, well it;s too early for me to tell

it’s too obvious with Andrew, the real sabatour would not want to draw attention, so i think it could be Lane, even tho he was in a blue chair, or kathy because seh was behind the couch and then went up on it, she could have done the lock first. or maybe annie?

brendon could go and rachel stay, she is way to entertaining to make fun of to leave so soon.

Cayden
Reply to  A. Stounding

I agree. She has been the most entertaining one to watch so far! Plus she is very easy on the eyes. If she leaves the season could start to be a real bore.

So did brendan get the POV?

Any word, who do t=you guys think is the sabatour.

Rachel is this year’s Jordan, but nowhere near as cute. She is a lot more annoying than Jordan and pretty stuck on herself, which in all fairness, Jordan wasn’t. I don’t want a whole summer watching her make out with her showmance and listening to that annoying fake laugh. As for who the saboteur is, I think it might be Kathy.