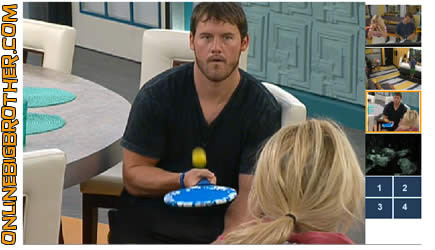 11:40am Enzo, Hayden, and Kristen are sleeping in the lounge room. Britney and Monet are in the kitchen whispering. Monet tells Britney that she is going to try today to see who’s votes she can get.

12pm Britney and Monet are sitting at the kitchen table whispering. They talk about how its almost August and the summer is almost over. Britney says what if it is just Brendon, Rachel, Hayden and Kristen left in the house … that would be the worst TV show ever …who would watch that… Monet says yeah. They talk about how similar Hayden and Kristen look alike. They speculate that Hayden and Kristen are related because they are always together, they have never seen them kiss, and they look so similar. Britney says Matt wants Rachel and Brendon out and he has a way bigger target on his back. Monet says that she definitely has her (Britney), Kathy, Andrew, and Lanes vote… Britney tells Monet that if she leaves tomorrow …she will tell Monet  her  boyfriends full name so that she can look him up and tell him that she’s dying. Britney says that wouldn’t it be creepy if someone you knew like an ex-boyfriend got the live feeds and was watching you…. wouldn’t that be creepy?! Monet says yeah!! They get up from the kitchen and head to the Have Not room.. Monet comments that she hasn’t been called into the diary room for a long time.  Britney says that she is really getting annoyed that every time she goes into the diary room they keep asking her why she wants to save Monet…. (just then Big Brother cuts the feeds to the we will be right back screen)

Use Flashback to catch all the drama! Superpass 3 Day FREE Trial

12:45pm – 1pm Ragan joins Britney and Monet in the Have Not room.  They talk about how Casey had to wear the banana suit when he was evicted and talking to Julie Chen in front of a live audience.  Britney and Ragan complain that all the outfits Big Brother gives them are extra larges so they are swimming in them.  Ragan says that he and Matt had to wear the womens sizes because all the mens sizes are extra large.  Ragan, Monet, and Britney debate whether or not to take a nap …because they are so bored.  Britney questions why Big Brother would take the backyard away from them when they are already so bored.  Ragan says and they will not be able to get into the backyard until tomorrows HOH competition because Big Brother told them to take all of their things from the backyard.  Ragan gets up and joins Matt in the other bedroom. Enzo wakes up, makes some fish sticks to eat and brings it to the bedroom. Ragan asks him what he is eating and Ezno says my nutz. 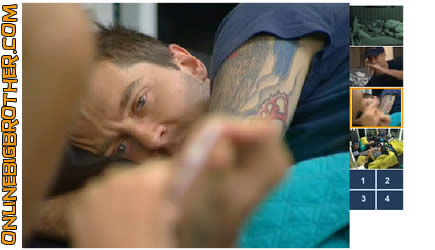 I LOVE ANDREW THE JEW

I’m not Jewish, but I am a Torah Keeper, and would convert to marry someone like Andrew….

They should start callong him “Ju Ju Boy” instaed of “Ju Ju Beans.”

i don’t think kathy will vote for monet to stay like monet thinks.

The Playa
Reply to  jay

yeah, monet has been smokin that wacky weed!!!!

Wow, according to Monet….Lane flips to her..

The Playa
Reply to  Jeff

If you think Britney’s nasty now, wait until her girl Monet gets evicted. AG better have an exorcist on hand – cause that bitch ain’t right in da head as it is!

HAHAAHAHAH, Brit is kinda possessed now that you mention it.

I want Enzo to get HOH so I can see what his wife looks like. He is always talking about nutz.

I want to see Enzo compete some more, before I make a judgement call on how stong a competitor he is…..I liked him early on, but to me is kinda being a leech to Lane, Hayden, and Matt….If the brigade starts unraveling, Enzo might self-implode lol which would make good tv…

I think CBS thinks that the viewers like B and R because they get most of the camera time.
I don’t think we have seen true personalities in most of the house guests. At least, that’s the excuse I’m giving myself today as to why this season sucks so far.

Kathy wasn’t even in tonight’s episode….thought that was kind of funny.

The Playa
Reply to  Jason

Wow, i didnt see the episode yet, so you mean to tell me i cant see someone named kathy who really is on the show, but you wouldnt even know it…lol

Sophie
Reply to  The Playa

I’m watching it right now and I’m seeing wonderful B and wonderful R and they are both so wonderful, amazing-just geez the two most fantastic people ever! If I have to see this “couple” or hear them cuddle, kiss or talk much more……I’ll slit my wrists!

hands Sophie some band aids. don’t do it girl, wait until they bring Jesse back. haha

Ooooohhhhh that would be bad! I hated Jesse the 1st season he was on and I REALLY hated him last season……but at least I didn’t have to see or hear him kissing-ah, man I’m so frazzled I can’t remember her name.

I dont.understand why u guys hate brit n monet so bad I would rather watch them then have to hear hoe bagz mouth n dont get me started on brendon I swear he is to fem for me

Is there anything Britney is not annoyed about? She has issues with everything and IMO she did not realize what she got herself into with being the BB12. I wish she would just shut up because anything she says is soooo ignorant and whiny!!!!!

I think she is funny at times and with all the kissy kissy going on I need someone to amuse me.

I agree brit is very intertaining! (: