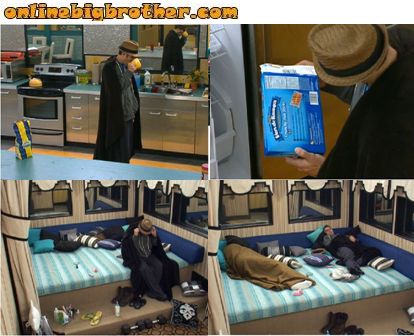 8:30am Enzo is up and waking around the house with his black blanket draped over his shoulders. He wonders into the bathroom, goes to the washroom then heads to the kitchen to make a drink.  He grabs the fish sticks box and looks at whats in them, then goes to lay down in the lounge room.  Not long after Brendon joins him and lies on the bench completely covered by his blanket. Enzo talks about the fact that they can’t sleep well and how cold it is in the have not room. Enzo says that there is some shit going on in the backyard. Brendon says yeah you were right about Godzilla. Enzo says that next week he has to be able to eat and that he can’t be on this not eating for two weeks. They talk about how bad fish sticks are for you. Enzo says that they have to eat something because they are going to have a challenge.  Enzo says that he hopes they will let them have a meal before. Brendon says he doesn’t think so. Enzo says that they just have to bang it out tonight. They talk about how shitty it is being a have-not, the showers suck, food sucks, they just want a real bed.  Britney, Hayden, Matt and Ragan join Enzo.   Britney says that people in jail should have to eat slop.  Hayden says that he wants to know why people that are in prison sit around for thirty years before they are executed.  Britney say amen, just kill them.. she says if she was in prison for killing a whole family or something …she would want them to kill her.  Lane then joins them in the lounge room.

9:55am Lane, Britney and Monet are the only ones left in the lounge room. Lane and Britney start to play fight and Lane gets on top of her and pushes her head into the mattress.  Monet asks him what he is doing and Monet says that he’s a jerk.  Lane stops and says why am I an jerk she started it.  Britney asks Lane if he is impressed by how she got away from him.  Lane says no.

11am All the house guests are on HOH lock down.   Brendon, Matt and Hayden are talking about video games. Kristen and Rachel are getting ready in the HOH bathroom. All the other houseguests are laying down trying to sleep or staring at the wall….

Thanks for the posts Simon and Dawg, I swear they get me through my day while at work. I love reading the blog and all the comments more than I like watching the show. I’m really starting to like Lane and Britt they’ve got a great bother/sister relationship going on that’s super funny to watch.

Keep up the good work guys…best Big Brother blogg out there!!

Glad you enjoy the site!

ILL WILL
Reply to  EastCoastCNDGirl

Simon
Reply to  ILL WILL

one of these days it’ll happen..

Hi East Coast! I’m a fan too and I’m from the East Coast.

OMG I hope that Brendon doesn’t win tonight. I can’t handle BBAD anymore. R/B make me want to puke. Please let someone win who will turn the house upside down.

ILL WILL
Reply to  bb addict

thats another reason it would be horrible for him to win…. enzo, brittney, lane ,or matt winning will be the only thing that will “shake up” the house… as long as one of “team delusional” gets put up i don’t care who goes home whether it;s rachel, brendon, andrew,kristen, or kathy

ILL WILL
Reply to  ILL WILL

Dan
Reply to  ILL WILL

Britney is to Big Brother, like “Chris” is to the movie “Carrie.” I wouldn’t put it past her to do the same thing to the winner on finale night,especially if it were Rachel or Kristen – actually anyone but her!!! That video would go viral in seconds.

Hopefully either Brendon, Kathy, or Regan win so R/B don’t go up I actually like them, they are cutee:D
If any other person wins they are done, well at least Brendon since everyone is going for him, I would go for Rachel because she seems smarter and knows alot more.

So I have changed a few things since my last blog, I have started to like Bitchney and can’t picture the house without her. I dont care if Monet stays or not. I utterly still cant stomach Rachel and Brendon is a dumbass for putting so much faith in that retard. So now I loathe Brendon too. Still want Kristen, Hayden, or Andrew to win but this season needs Britney cause she is exciting. She has a great personality when she isn’t slamming my baby Kristen. If Monet leaves I can see Lane getting really close to Britney. Matt is still going to be in this game longer than Brendon and Rachel and that alone is worth watching. How can you not trust someone who staright up told you the truth when you put him on the spot. Matt gained respect from me for how he handled that situation… He has had some dumb moves but for the most part he will make it to jury and could very well win this. Sorry to the family of Rachel but she is really annoying and if it wasnt for Britney, Kristen, and Andrew, then I would not watch this year just because Im so sick and tired of seeing her all the time. It is not called BB After Dark its Rachel and Brendon After Dark. It’s just too much!

Rachel is stretching wrong. Her hips aren’t square. she’s going to tear a muscle, and have to leave the house, or she’ll lose all the physical competitions…