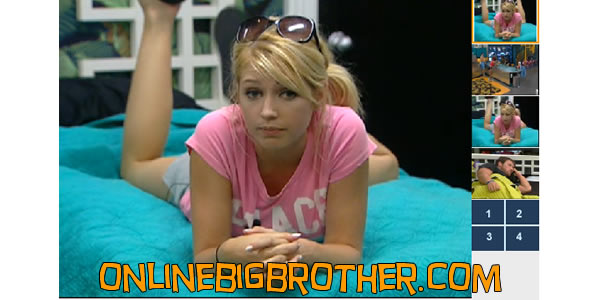 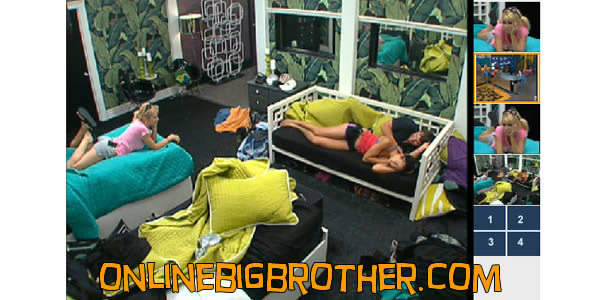 Britney says that there are so many wildcards in the house, she lists off Kristen, Andrew and Ragan could be after her and she wouldn’t know. Britney thinks Rachel isn’t making her own decisions, would do what Brendon wants as HoH. Britney and Lane try to figure out who Brendon would target. Lane worries that Brendon would want to put him up. Britney says that Brendon wanted her and Kathy up but that may have just been his way to not go on the block, not because Brendon was after her Lane says that everyone thinks that Britney is playing the retard card and that he’s not sure if she is or not. Lane starts flirting with Britney. Lane and Britney both agree that it’s really hard to refrain from making out together. But that Lane knows its going to happen. 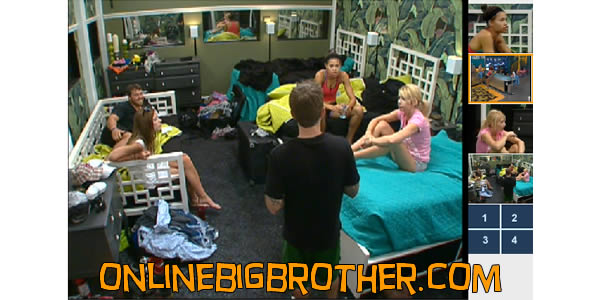 2:20pm – 2:30pm Lane says that they need to plan for jury votes, and to figure out which three people to get out before that. Britney sometimes thinks Andrew likes her and sometimes not and that she doesn’t know about Andrew, so she’s not sure if he would vote for her. Monet comes in. Britney and Lane joke about different scenarios of Monet’s bed situation, like if his arm or leg were to fall on her during the night …how would she get out of it. Britney and Lane tell her to show them how she would get out of it… and she does. Monet gets on the bed and she shows Lane how she would get his leg and arms off of her. They are having a really funny conversation. Britney asks Monet to make it to the final 6 would she touch the tip of her tongue on his balls sack? Monet asks on or off camera? Britney says off camera. Monet says yeah I would do it. Lane says YES! Britney asks to make it to final two would you like his gouch? Britney says something to think about… Monet debates it and finally says yes she would to make it to final two. They continue to talk about some really funny sexual scenarios to be guaranteed a spot in the final two. Britney asks Matt, would you let Monet drop a grenade …butt hole to mouth for the final two. Britney asks Lane …would you let Jerry superman that hole …you?

This is too funny….. too bad the cameras are not showing everyone in the room….

That is exactly why I don’t like her because she acts like that. But I have to admit this was pretty funny.

i like Lane and Monet..they should take it slow and confined in each other, with a lil bit of Britney cupid self.

This season started out slow but these guys are talkers! I love it.

LOL I had a good laugh with that one to

I think once people get into this house, they automatically lose all sense of reality. They do realize that every word they say is heard by millions, and millions, of people, right?? Including their mothers, fathers, sisters, brothers, priests, teachers, significant others…

they r just being theirselves, they will talk about EVERYTHING b4 the season is over..wat wld u suggest for them to do..puzzles and be quiet

I would love to hear an extended interview with some of the past players who made asses of themselves….and there have been many. I’d like to know how it affected their lives once they got home. Like Chima…..Nasty Natalie….and my favorite was the show they did when the writers were on strike. I can only remember James but the whole house was nuts. I’ll never forget the night they had a full fledged porn scene on After Dark. And James showing off his cock every chance he got….even doing a trick with it. I can’t see how some of these people got out and didn’t have problems from their actions on the show.

i just followed the ones i cared to know about..its all on their twitter or myspace pages….this is a game, im pretty sure everyone one some kind of money or reward bec of the show.

i have a pic of that somewhere…

I am NOT going to ask why? hahahaha

I’ve been trying to send you that pix, but your contact email address keeps rejecting any and all emails.
Any suggestions?

I like everybody so far except Britney. She puts everybody down. ( well all the girls). I guess she wants the boys to be all over her. She seems like the girl in high school that was a cheerleader and looked down on everyone.

Yup. Which is why I started off liking Annie a lot, since she was like that fun girl in high school who wasn’t vapid. But yeah, she’s digging her own grave. But to be fair, I’d be shocked too if I was her – they are crazy for not separating Brendon and Rachel. That would make me a little crazy too.

Did I read that right? I don’t have the feeds so I’m going on what I’m reading, but Britany and Lane say that it’s hard to refrain from making out together? Correct me if I’m wrong, but If this is true that makes it interesting, because I think I remember Britany saying that she was engaged. So either she should have a really pissed fiancee right about now seeing as how she’s discussing making out with another guy or there’s a connection there?

They are constantly flirting/teasing.. actually Lane does it with alot of girls in the house

Yep. What Simon said. And I’m glad you refer to Brit as “evil” in the pic captions. She’s the only one who’s treacherous so far. She’s 2-5 house fights waiting to happen this season. Pretty much guarantees she’ll make it to at least half way through the season, but has 1% chance of winning the show.

Maybe Lane is the fiance??

Kristen and Andrew are brother and sister. Kathy and Brittany are mother and daughter. Basically each HG has a longtime association with another HG. Some of them know their association and some not (a throw back to the DNA season with Cowboy and his sister) That is except Annie. Her associate ditched her and the show the week before they were sequestered. The realtor who ditched the show and Annie was her girlfriend. From what I heard they ended their relationship right before being sequestered which had a domino effect on the show. They came up with this saboteur twist at the last moment.

This actually explains why these HGs are so full of anxiety and paranoia right off the bat.
I hope I explained this coherently.

I hope this doesn’t come out as a double post. I made a comment about something I heard from a good friend of mine who works for CBS. Basically, this season’ was originally planned as a “fusion” of two past past seasons where 2 HGs were related (the twins), and the season of DNA (HG related but diidn’t know – i.e Cowboy and his 1/2 sister).

Basically 6 HGs are related and 6 do not know they are related to another HG. The houseguests related to each other are: Andrew & Kristen (brother & sister), Kathy & Britney (mother & daughter), and their is a (brother-in-law & sister-in-law pair). The other 6 (originally there was to be 7 pairs), don’t know they are related. Annie was cast on the show with her girlfriend – the realtor who ditched the show and her (why she has nothing) the week before sequestering.

Additionally, all the HGs are the saboteurs, but each HG thinks he or she is the only one. How else could this train wreck work for 5 weeks. So each guest knows that they are guarenteed at least 10k per week no matter what. This explains all the paranoia and anxiety for the 1st week.

I hope I explained this coherently.