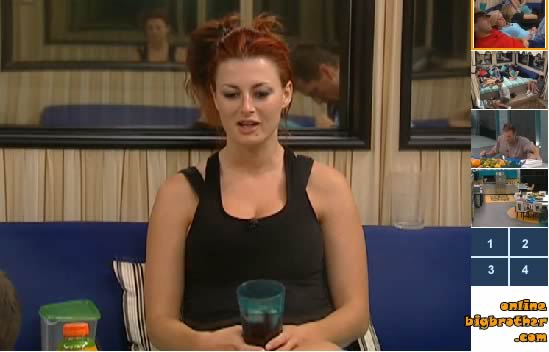 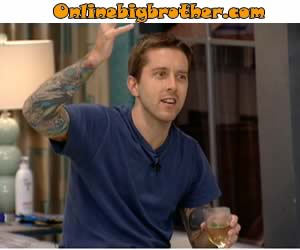 9:30pm HOH Matt and Rachel They start going over everything that happened in the Meeting. (I’m not shitting you when I say this Every second word Rachel uses is **LIKE**) Matt sticks to his story about feeling awkward with Monet being up and he didn’t want to vote her out so he decided to go up as the pawn. She says that all this shit she been hearing pisses her off it’s one thing to come after her but to come after her and her man that really makes her made (Add about 30 **likes** into all my sentences and you’ll have Rachel’s dialog) Matt says that is obvious that you and Brendon are in a final 2 nobody stands a chance against you 2. He says it’s crystal clear and that is why people are gunning for you. Rachel brings up the fact that everyone in the house is in a final 2 this entire game is about pairs. They are coming to an agreement though and things have calmed down alot. Matt tells her he was biting his tongue the entire time he was being grilled in that meeting, he wanted to call each one of the people on the couches out. He feels bad for Ragan because he was trying to get out the truth and was feeling caught in the middle. Rachel tells Matt that he played his cards too quickly. SHe says that its bullshit that everyone is after b/r because the house is full of pairs, Hayden/Kristen, Monet,Brit, Matt and Raga. Brit arrives and they go over it all again…. Rachel goes into this long explanation about how much she loves Brendon and how wonderful he is. Rachel says that if Brendon leaves early she wants to go next because she is so in love with him and doesn’t want to be apart. (Like like liek like like like like like like like like lik elik elielk koee lkeoil,elie elei … there got it out of my system)
Watch all drama on FLASHBACK! FREE 3 Day Trial

Rachel is a beeyatch….She took matt’s comments personal, he was attacking B&R because they are team in the game, not their relationship…..She is beyond dumb, rachel just said, “Britney and Monet aren’t coming after us anytime soon”….are you kidding me? lol

Hopefully, no one sets Rachel straight….. her and Brendon need out of the house now so they can begin having their “relationship” in the real world. Ha! And that will last LIKE a week.

Yeah that’s what she gets for putting up britt and monet. The guys are stronger then them girls. They might get hoh first and there history.Brachel is so annoying. I hope Hayden gets caught! I hope Kristen gets put up next week with Brendon. Let see her run her annoying trap and cry all week.

too much camera time for fake Rachel=time to change the channel!!totally fake (physically & personality) and rude.count how many times she interrupts her so called bf brendon the boring.also, no more fake ass makeout sessions…..what are they like ten yrs old?????
word to brit & monet…….stop bitching out all the other girls.meeeowwwww.and enzo,pleasee close your damn mouth while eating.ouwchhhhhh.

Btw: Every Time she says like put a dime in a jar. You’ll have a kids college tuition. Omg! Every Time she mention her and Brendon the work “like’ WE ARE MORE THAN A SHOWMANCE. Really? You guys just met.They keep saying Enzo is a floater, just like the thought Matt was. Can they use there brains for once.

I JUST SAID THE SAME THING,LOL

Is it me or is matt drunk? He sounds hammered!lmao.

THEY HAD A FULL ZOOM ON THE EMPTY WINE BOTTLE,LOL

How hilarious was it watching Rachel tell Brittney that she’s so great at watching people and she knows when people are being shady. So clueless. Priceless.

OK people, keep bitching about what a dummy Rachel is, and when it’s over you’ll all be looking at another dumass winner (like, ah, LIKE, say, Jordan?). Isn’t it interesting that Rachel does almost everything you’d expect of a total dumass, right down to the LIKE, LIKE, like stuff? Yeah, dorks like that pursue advanced degrees in difficult subjects just to pass the time. Like, sure, you bet….

She not only said “like” a thousand times, she repeated whole sentences over and over. “Like, and I said this to Brendon, like, I really like you Britney”. PLEASE cbs switch cameras after the third time she says something. She repeated herself over and over for “like” an hour. LOL

Rachel is the biggest dumf*ck! Srsly admitting to matt and brit that she cares about brendon more than the game and then trying to convince matt that there are couples that are just as dangerous as them….no bitch….in the same breath you just said that the “relationship” is bigger and more important than this game! If I have to here her say one more time that ” you dont come in between me and my MAN”

Rachel is possibly the most deluded player in recent memory. She is always comparing herself to the best, but she is starting to look like a combination of some of the most annoying. She is as dumb as Jordan but nowhere near as genuine and cute, She is as deluded as Natalie about her importance and how people feel about her. She is as annoying as Yvette. She is as camera hungry as Chima and her laugh is as annoying as Chimas was.

I heard her say a few times that their goal is to make the jury house together. WTF???? You mean they aren’t there to win? I hope one gets evicted before Jury and the other is first to the jury house. That would be their worst case scenario. Hahahaha.

Go Brit! You really stirred up a shitstorm and the aftermath will go on long after Monet is gone. Or maybe Brendon is stupid enough to vote against Matt and sway Kathy too and Matt will be gone. Either way, she is brilliant, and Brendon and Rachel ate it all up. Loving it. Something finally happened!!!

Interesting to me how every loves Brit – the self centered psychopath, while hating Rachel, who is playing the game without much of the hateful seething of Brit and Monet. The only reason I still watch this show is because someone who is normal finally won last year; a nice normal kid won without being a hateful, backstabbing psychopath like Evil Dick or that lying a-hole Catholic School teacher. OK, so Jordon will not get nominated for the Nobel Peace Prize and may in fact, need help to cross the street; she still managed to walk away with the money.
Is Rachel really that stupid? Hasn’t anyone noticed she becomes more inane in proportion to the size of her audience? Put more than two players in the room with her at a time and she drops to total dumass almost immediately. I think there is a reason for it – who will be threatened by a Bumbling Bimbo? My feeling is Rachel will let everyone else do the dirty work of getting rid of Brit, Monet and even Kathy simply because they will all feel they can dump the dummy at any time, and by the time they finally catch on, they won’t have the votes to get her out.
I already know most of you think I’m the nut job with this theory, but how many of you have advanced degrees? They don’t hand out Masters Degrees just because you can jiggle your boobs on command. Rachel is playing the game (and all of you) with the Bimbo act she perfected in Vegas (where such behavior by women is not only expected, but wildly rewarded).
I’d easily bet that Rachel will be in that house longer than Brit, Monet, Kathy and even Kristen (who is no dummy either).
Bring it on guys; can’t wait to read hate filled diatribes against Rachel, who will almost undoubtedly stay in that house longer than any of the psychopathic bitches now there.

“and may in fact, need help to cross the street” has me in tears! Hilarious.

I don’t think Rachel is stupid. I think she is a dumbass because she is “In love with Brenden” and never shuts up. My biggest fear is exactly what you said. She will out last the more entertaining guests because they will think that they can evict her at anytime. I normally don’t like the evil HG’s but this season is really boring and Britteny is really funny.

I agree, Brit says some funny stuff!!! At first I thought she was playing Brendon, but after her goodbye message to Annie I was like WTF? Her man??? Seriously needs a reality check or a daddy.

Is it just me or does Rachel’s hair length and color keep changing?! She is annoying. I hoped that she would be a smart exotic chick at first, but she’s just a cracked out stripper copying off of someone else in chemistry class.