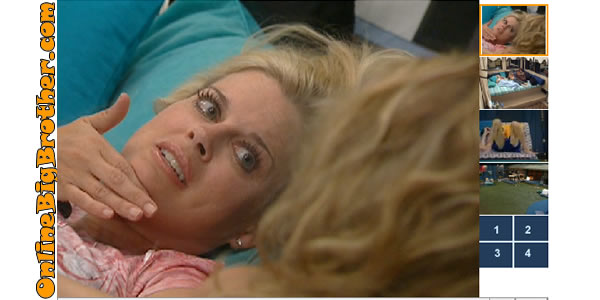 Hayden, Kath and Kristen are laying down chatting. Hayden and Kristen share stories about when they use to wrestle their siblings and Hayden hurt his sister once and every since she doesn’t wrestle him. Kristen busted her brothers chin open and it start to bleed everywhere. Hayden “Chin cuts bleed all over” Enzo steps in at one point tells them they have liquor and their thinking about saving it to get fucked up tomorrow… he leaves and the 3 go back to chit chat, counting the fish, bratty kids etc etc. 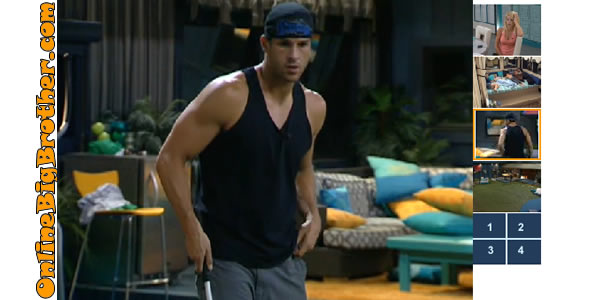 10:35pm Backyard Brendon and Ragan Talking about the poltics in the house/ Brendon is talking about Enzo and how he doesn’t know what he’ll do with the vote, “He might go with the house he might not i dunno” ragan agrees, ragen says that a lot of people have Brendon’s back and he shouldn’t be worried. ragan points out that Brendon will most likely be backdoored to prevent him from winning POV. ragan admits that he’s not a big game talker and he’s only talked to a small group of people in the house. Ragan mentions how Enzo is kinda iffy to him because he they don’t talk. Brendon says in this game if their not talking with you there talking about you. ragan agrees. Brendon says he wants to keep genuine people in the house. He’s hinting that Britney and Monet are fake. Ragan says he would love for Andrew to win HOH and get back at all the people that mess with him. They both agree that Lane is genuine, he’s a strong player but genuine. Rachel comes back from being in the DR and Brendon is practicing with the golf clubs. He tells her he’s like Tiger Woods but he doesn’t cheat on his wife. Rachel asks him if there was 30 girls in vegas if he would… “you know a lot of the girls in vegas have little Morals”

Ugh Kathy talks waaayy too much! And so does Annie get a life! Andrew is like not even apart of the show, like he’s a ghost! Yea I’ve made up my mind, Britney does look like Nicki Minaj lmao

How in the bloody universe does BRITNEY look like Minaj?

i see how you think she looks like nicki minaj. they both have very big eyes and wear fake lashes. and they both have teeth that are too big for theres face & look fake as hell.

heres a pictue. i see the resemblance a bit. http://fashionbombdaily.com/wp-content/uploads/2009/12/Nicki-Minaj-Fashion-Style1.jpg (are we allowed to post links?)

compare her picture in the right hand corner with Nicki Minaj’s….lol believe me its possible to look like someone even though someone is a different race. i guess its the dimples, the teeth, the smile idk. but im not the only one whos said it believe that

I gotta say, she does kind of favor her, with a slight turn of the head. Lol

Who ever said Britney looks like Nicki Minaj is on C R A C K. I’m a huge Nicki Fan and she looks nothing like her….

Just FYI, quick topless shot of Monet drying off in the shower at about 2:19 pacific time (so 11:19 big brother time I believe. Just saw it on BBAD.

idono who she look like but that lazy ass eye freaks me out. things floating all around her face.

I watched in amazement last night as the MENSA twins Britney and Monet held court in the toilet with Annie, telling her how things are going to run if they, the wannabe BB Mob queens, LET her stay. The scenarios were priceless: “when I get HOH next week, I’m going to put you up as a pawn” Britney dictates as her dutiful bobblehead partner cozies up next to her nodding “yeah, yeah” like a raspy 1960’s cartoon rat. Arrogant much Britney? That’s a pretty big assumption you’re tossin’ out there blondie. You barely finished all of the challenges to date. Yeah, good luck with that plan.

Check out Hayden’s chin, to see if it is scarred. I think the sibling fight convo is telling. They may not be giving clues, but unable to not keep some things out of chit-chat/ Anyone else have an opinion on that?