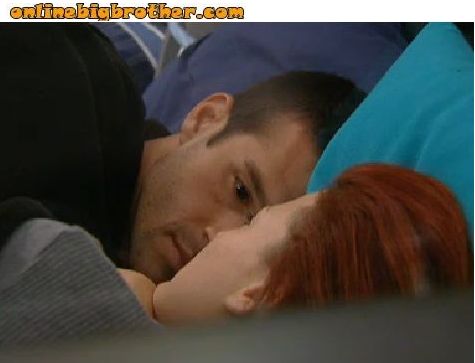 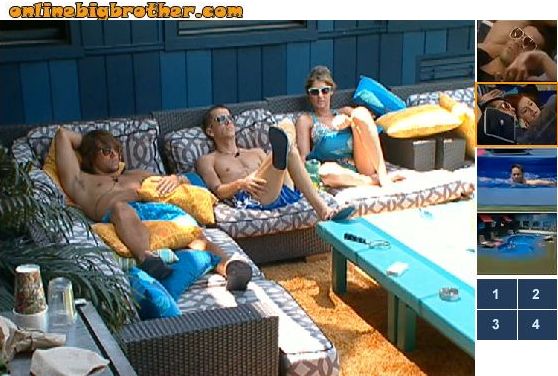 1:50pm – 2:10pmHayden, Ragan and Kristen are sitting on the backyard couch talking about random stuff.

we’re trying.. but it’ll be tough.

yea brittney nude is gonna be sweet, but id be happy with a nipple shot LOL

Boys, she’s not that kind of girl!

That’s what makes it so important. Just a nip slip would do wonders. And it is possible – we gotta believe!!!

WTF?
“Brendon says that he is going to make Enzo swear on his daughter that if he gets HOH he will not put him or Rachel.”

this is why america hate brendon and rachel why would you ask someone to swear on a family member it’s that cocky attitude that will get them 2 idiots sent to jury..

id smack the hell outta someone who asks me to swear on a family member or anybody i care about, over some dumb stuff like that. thats not cool man

I bet Enzo snaps once Brendon says that! I agree with you.. don’t mess with a man’s daughter!

enzo’s been talking “smack” about brendon for quite some time now.. If brendon gets in his face and enzo’s back is against the wall he’s going to take brendon to school yo..

I so hope Brendon tries that..I for one would love to see Enzp smash in his sissy face!

me too , but i wouldn’t want anybody there to get sent home over dumb shit…like chima last year if she wasn’t such a divabitch she could’ve made it far maybe outlasted kevin, because i know natalie loved her

SIMON I LUV WHEN YOU TALK GANSTA

LOL.. thats what I do YO me and my thugs up here in this piece yo.. dropping mad deuces on your hommies yo.

if it’s on a serious note and i know for sure ill never go against my word yea i’d swear on a family member, but over something meaningless HELL NO…

talking smack is one thing but what brendon is going to ask is not something to play around with, it’s serious… and you know rachel is too simple minded to tell brendon not to do that, to maybe take it another way

why would Brendon even ask that? It’s pointless to swear on his daughter when Brendon isn’t offering anything. What an idiot. He thinks he has so much power, he’s in for a rude awakening Yo!

i know enzo is not a puss like matt he’s gonna put them up if he wins, as well as lane and brit, but i hope he brushes him off hardcore soon as he says that shit…

i think these 2 were put together on this show to meet and fall in love, have kids and live happily ever after…….YEAH, and Ragan likes chicks!!!!!!!! uggghhh..just get one b/r out and one in the jury house so they can both sweat it out…..worst season….

Enzo is all talk ! He hasn’t done anything in this game ! The Brigade are all losers except maybe Hayden ! (he has Kristen). Lane could do something if he lands Brit …

I kind of agree with you. Talk about ultimate floaters. Trouble is he hasn’t HAD to do anything yet…. but you have to agree was a brilliant move making a 4some alliance from day1. Could have backfired in his face but it didn’t so they are sitting pretty.

word the brigade has not had to pounce yet, but when their backs are against the way they will

matt has to go though

ihatebigbrother
Reply to  Mr. Don't Give a F**k

Please! Who is kristen again? what have she done in the game? I missed it!

She ate a spider.

I like that the brigade has stayed under the radar but I almost want them to make a mistake to shake things up. They are all doing a good job of keeping it quiet so far…has haydon even told kristen?

So stupid of Brenden to even think of asking Enzo that question!!! Dumb Rachel for believing anything out of B’s mouth about Andrew. By the way, maybe Kathy has been faking all along about not being so “tough” since she is a cop. Maybe she will start showing her real stuff if she isn’t booted out. Perhaps she was really just playing dumb and weak. We will see……………………..

On Bitchy BB, it said that Kathy was getting IV meds during the popcorn challenge. I hope that maybe now that she is “feeling better”, she can perform more in challenges. Maybe her being so sick was misunderstood as being lazy. But, I also believe in rainbows and unicorns, so……

the only reason people are saying she is weak is , the “caramel competition” tell me who man or women could move when drowned in that thick stuff? she wa sthe only one who fell into it, making it cover most of her body

Umm … she also made an ass out of herself during that first HOH comp. She kept jumping, grabbing the bag, and falling repeatedly. Common sense would tell you that if you try the same thing a few times and it doesn’t work TRY something else. Did she? No. Same thing with the caramel. She just kept trying the same stupid thing. She has no physical abilities that are apparent from her participation in any competition so far. Plus, her smoking diminishes her ability to keep going for it because it interferes with lung capacity.

I really hope Enzo punches his lights out. As a matter-of-fact, hope the other brigade members pile on.

Brendon is a real piece of work to even think this!!

Enzo is just some small time wanna be that has more mouth than he should. Real men don’t brag they just do it, element of surprise is the main thing. If your going to do something you just do it, don’t broadcast it.

brachel’s delusions is exactly why their in the position their in….. both educated yet act dumb as shit the entire time in the house, hmmmmm

I agree 100% they have all book smarts(even though Rachel is a ditzy valley girl) and not one grain of street smarts.They are the most hated ppl in the house and they have no clue!!

I want to see Lane and Enzo nude

I’ll be all ears and eyes waiting for Brendon to approach Enzo about swearing on his daughter. I hope Enzo punches his lights out. I’m sick of these people talking about farting and now S___ all over the bathroom. Make me sick to my stomach. Some things should be kept private. Not funny.

yea , i never even knew slop gave you gas b4 enzo let it rip

So many people swear on their family on these type of shows
I dont see the big deal on a reality tv show
remember johnny fairplay????
Noooow in real life thats a different story.

just because someone does it a lot don’t make it right, and it is real life… what you think just because their on reality tv everything that say is not real???

when people 1st started saying, “I Swear to ___” it was a religious type thing where if you went against your word it was said something bad would happen to the person you swore on….. it’s a superstition type thing, but a lot of people take it seriously

I think the ideal scenario for Andrew would be for him to go to Hayden and Kristen (since he’s the only one that is 100% certain of their showmance and they are really adamant about keeping it secret) and tell them “either vote for me to stay and convince your friends to do the same or on the way out, I tell everyone about you guys and put a huge target on your backs”.

That’s what I’d do anyways. Win-win… either Andrew stays or he stirs up BIG drama on the way out! LOL

who is kristen friend beside hayden?lol.

I swear these HG al have ADHD. Why are they already playing next week’s game, when the 2 most crucial events, Eviction & HOH, of this week haven’t happened yet. They “assume” to much. You never know who will win HOH, so until you do, how can you possibly come upwith a strategy. It’s like thinking you can ace a Spanish Exam, without studying, because can speak a litle bit of Italian. Nothing is for certain – and besides they should save what little brain cells they have for the upcoming HOH competion. Especially you Brendon!

I totally agree…..they think to far in advance as far as I’m concern you should play the game week to week not 5 or 6 weeks ahead because who’s to say they will be there til the end!

i think that Andrew and Brendon are related or friends. Brendon is always looking out for Andrew.

“”” Don’t ya.ll think it’s funny how Brandon alway’s trust Andrew “””” there is something there between those two. Can’t put my finger on it, but just running it threw my head, maybe they are brother-in-laws, or ol’ high school friends, just real fishy. This year bb,ers is just not with-it. I have lost interest & it’s way to much one sided. Don’t need to repete it, because ya’ll know it’s all about two gross people. Matt was on another T-V show, I looked him up, Matt Hoffman, so this guy is not new to this stuff.