7:09pm Backyard Enzo, Brendon and RAchel Brendon is telling Enzo that he is pissed that there was people that dropped out of the HOH so early. It shows that these players don’t want to play the game and just wanted to stay off slop. He wants to take those players out. Enzo: “What was the time when they started dropping off 15… 20 minutes” Rachel “NO it was 8 Minutes” (Lanes time) Enzo replies “THATS just disgusting”.. Brendon says that ragan is taking it very hard because he really fought for the competition and now he’s on slop. Enzo madly munching on his food replies with ya ya ya and sometimes the odd “Ohh that is Disgusting” (Brendon and in a smaller way rachel have been working enzo for the past 4 days, being extra nice to him etc etc.. they have no clue how tight he is with Lane and HAyden)

7:23pm Ragan and Brendon Playing pool, talkign about pool… you can hear Rachel in the background saying “HEEEEEYEE!” as she goes inside. Brendon starts talking about the Full marathons he’s doing, LA marathon and the la hoya marathon… 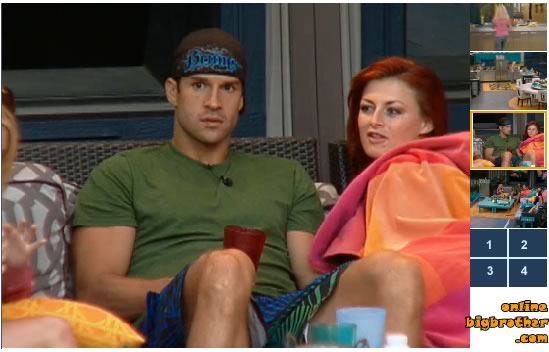 7:40pm Backyard Matt, Rachel, Matt, Kristen and Brit
Brendon talks about L Ron Hubbard and how he found out the best business model is one that is religious because of the tax loopholes. Brendon “It’s the most profitable business and that is why he started it”.. He goes on to say that there was a bunch of popular celebrities that jumped on board and really publicized it and that is why its as big as it is today. Rachel asks if he was ever a Scientologist seeing as he knows so much about it. Brendon says he worked for a place thats business model was based one Scientology but he was never into that stuff. They start talking about what there names mean. Rachel says this “Named after Ewe and Rachel in the bible and my middle name is Ailene and my nephew’s name is riley”, The girls say how much they love the name Riley. Brit’s says her name means “british”. Kristen is a Norwegian and it means Anointed one.
Matt says: “I saw Matt it on a mug somewhere and it said it means a gift from god”. Brendon says his name is Irish Gallic means little raven. rachel mentions that she would call him braden for the first week…. Lane joins them


Onlinebigbrother.com is around because of your donation every year the site costs us to host the images and run the 3 servers needed to handle the traffic. If you like the site then please consider donating to keep the madness going. Thanks!

i want to see boy george b1tch for a week. They are happy , when kathy and andrew is on the block.. Wow! Matt is on my chit list!

I do not see boy george…I see
lindsay lohan in drag…..it is actually an insult to boy george!

what a real dickhead

Maybe Brendon will use POV for Andrew and they will put up Rachel. He could be using her to divert the attention from the fact he and Andrew are “life long friends/brothers” It is all about Expect the unexpected…

anyone have a good pic?

Can you put some hair on SpiderMan for Kristen? I still think Andrew looks like Norman Bates. I am sure others have better ideas.

Now that I have seen the show, I see that Andrew now believes Matt’s story about his wife and her illness. That will probably help Matt get votes from the jury house.

And, I loved Lane and Britney’s roll play. I guess she has someone to replace Monet. I have to tell you that I hope Enzo gets stuck on “have not” next week, too. I will enjoy seeing him go nuts.

There is nothing unexpected this season. It gets more and more predictable every year. The big hype of a twist blew up first week. And there doesn’t seem to be a back up plan. I hate it when houseguests guess what competition is coming up, and often they are right. The challenges are the same, with different decoration and costumes, and they follow a format. I hate watching guests count things because they know there will be a counting challenge. They memorize faces on the memory wall for the morph competition. It’s too predictable. I want them all freaking out wondering what BB is going to do to them next. I want them to be afraid to close their eyes at night. I want to tune in and be surprised by a twist or a new competition with unsuspected consequences. I want BB to mess with their minds so bad that they don’t know how many days they’ve been there or how many days are left. I want to see the chenbot do something differently, just once. I’d like to feel like I’m watching something that hasn’t already been done.

This season is like a blend of past reality shows. Brittany’s and Lan’s role playing were cute…I wonder if Brittany was as good as the cows and horses