Annie asks Lane if he is gonna go put on his speedo for her. Annie asks Lane if he can pick her up … and he says yeah. Lane then picks her up by her arm and leg. Annie says Lane your strong Lane, you’re my saboteur! Annie then goes and gets into the pool with Matt. Matt and Annie both say how much they like Lane and that the viewers will too. Matt says people like Lane because everyone has a friend like Lane. They laugh about how their first diary room sessions were brutal because they didn’t know anyone and their comments were based on first impressions only. Matt says that this experience is really cool because some of the people in the house he would never normally associate with, he says like Lane. I would never associate with a Jock type guy. They talk about how Lane is a real cool guy that is genuine. They say not like Enzo that pretends to be funny.

11:30am Britney is laying on the backyard couch talking to Brendon about the school system in America. It’s a pretty boring conversation. Britney gets up and goes to the bathroom where Lane is taking a shower and talking to Monet. Monet and Lane are arguing. Lane says that he worked out for 2 hours today and Monet calls bullshit. She says that she was in DR for maybe a half hour. Lane explains that he did this many sets of this and this many sets of that …so yeah 2 hours.

Onlinebigbrother.com 11:45pm In the backyard Matt, Ragan, Brendon, and Rachel are talking about past seasons of Big Brother. They each say which season was their favorite. They talk about Allstars and who would be a lock for the next Allstars. They then talk about how Matt and Adam are in jail for drug trafficking and how Matt beat his girlfriend. They say that James wouldn’t be asked back either because he did gay porn after the show. They talk about how they would bring back Ronnie, Evel Dick, Renny…. Ragan says that they will also pick some stale toast people too. Ragan says that he doesn’t think Big Brother would pick anyone from the first 7 seasons. But that he would love to be in the house with Janelle. They continue to talk about all the famous moments of Big Brother that they loved. 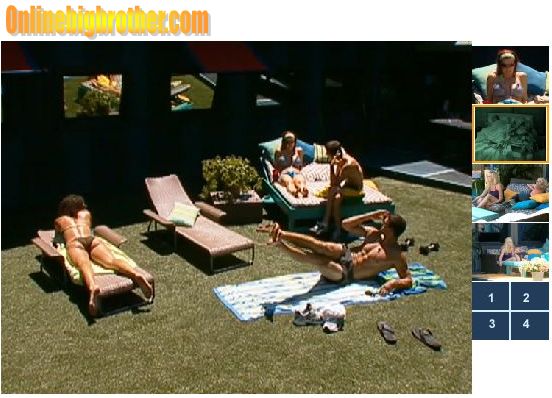 12pm – 12:10pm Big Brother calls for a indoor lock down.  All the houseguests head inside to make lunch. They figure that Big Brother will be setting up in the backyard for awhile. Big Brother calls Brendon and Rachel into the diary room together and everyone goes OOHHHH! Ragan yells conjugal diary room session. They laugh and say he’s her lobster.

at first when i read this i thought you meant matt from this season (about the drugs and girlfriend beating). this was my face —> O_O then i realized it was the one from the couples season.

Lol funny. I didn’t watch that season so I kinda thought the same thing.

Wow . . . I didn’t know about that drug think at all. I Googled “big brother matt adam” and wowwwww. Can’t believe that. Thanks for pointing it out!

they need to squash the “showmance” NOW by getting rid of rachel, and if they wanna get annie out get her out next week, but their being idiots by not believing what she saying and she telling the honest truth too…”Jeff & Jordan” all over again only this time they will be dominating the house and now coasting through… watch branchel win HOH

The Playa
Reply to  SDFU

i know, dat thing is so nice, curved out nicely

Monet does have the nicest ass in the house!