6:45pm Andrew tells Kathy he won’t be campaigning against her. kath tells him that the whole house is torn. She says that they didn’t expect for both of them to be up, “They wanted to backdoor someone” Andrew says thats what he’s hearing to and it’s stupid, “He wonders what would happen if he pissed on their heads… just go in there and mess with them make them mad”.. Andrew complains he has to clean up after them (the house in general), literally & figuratively. kathy says at least the house is split we know we have some votes each. Andrew is mad about the situation but mostly mad that he was used for this backdoor scheme. He says that the next couple of days are going to go fin he’s going to try and enjoy them as much as he can. He’s sick of the two of them having to play the mother/father figured in the house.
Top Big Brother Sites check them out

7:28pm Hayden/Lane playing pool, on the couch kathy, Kristen and Andrew chit chatting a flip over to that cam and Kathy has this to say about one of the rooms in the house “It’s like that room is a sound proof room when it comes to sound”

7:40pm HOH kathy and Matt kathy says she sorry for bothering him, He doesn’t care “it’s a open door policy here”. Kathy warms up her “YOU KNOWS” and gets ready…. “You know what happened you know just happened you know.. you put 2 people up you know… those 2 couldn’t win POV you know and yoi know what? Those 2 people worked there hardest you know… You know..” (Well maybe not that bad but you know it’s pretty close). Matt goes on about how this wasn’t in his plan (I’m starting to think this is exactly what matt planned) Kahty tells him not to feel bad she’s sorry she didn’t win the POV she really tried. Matt tells her not to feel sorry it’s him that should be apologizing. Kathy just says that things can happen in the house it’s imposable to predict. Matt says he’s not going to campaign for one person to leave over another. kathy appreciates that she hopes that people vote for themselves not because of the way the house is voting. Matt goes on and on about how this wasn’t suppose to happen and how he fucked up.. 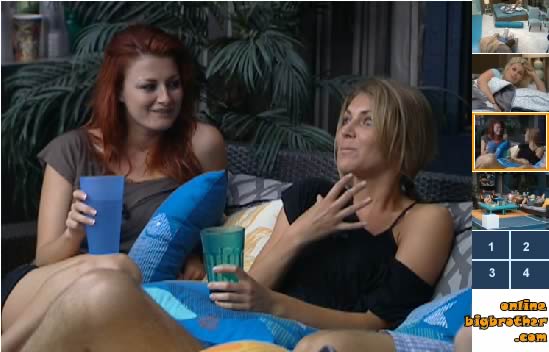 8:05pm Enzo talking about Italy, Brit tells them all about Pompeii

Right now, I’m still kind of liking Brit, Andrew, and Ragan.
The rest of them…are messed up. Can’t believe how lucky Brendon and Rachel are. They both need to go home! Especially Rachel.

First one passed out is the Winner… or Loser! :)

I think you are right about Matt, Simon. This is more his plan than an accident. I can see where some are not getting wise to him but I am disappointed in Lane. I thought he was smarter and just laying back waiting to act. But, if he isn’t questioning this play of Matt’s I have my doubts. Maybe the light bulb will go off over his head when he see how people feel about Matt when he isn’t HOH. Perhaps he will see that maybe ole Matt is having it to good and safe with everyone.

BBGrandma, in order for him to maybe see that light bulb, “Haydenhoff” needs to get a haircut. he’s a nice looking boy, I get the surfer dude thing, but come on – get a new do!!!

It was Lane himself who said from the start that he is not very bright and that his plan was to attach himself to someone who is smart. His attachment to Matt and The Brigade is consistent with his introductory remarks about himself, as he was shown packing (at home) to leave for the show. After Matt created the Brigade, Lane even said (in private, not in front of the other members) words to the effect, ” I don’t even know what that word means! What is a brigade?”

Andrew’s flipping to the dark side. By tomorrow he’ll be Britney’s BJFF. They spend the week by the pool trashing everything and everybody (except Kathy). It will be like the movie, “Cleopatra Brown & Rabbi Schwartz” (as featured in the 1979 comedy, “Kentucky Fried Movie” – it can be found on YouTube)

I would just like to say that Andrew seems like a nice guy..he has values, respect and I admire his devotion to his religion and beliefs. It would be nice to have some of this rub off on some of the fools in the house, ie kissy faces and two faces! Thank you for letting me voice my feelings.

brendon is attracted to trannies

you guys are great. ive been way behind of bb this yr. only thing i got right was this group is by far the most psycotic (SP?) group in ages. except for the brigade, they seem really loose n catty n unbelievablely naive on how bb works. i hope to see brendon gone with rach left behind to cry. her drinking is hilarious as well (and she did whine about why they cut her off as well…duh…wonder why). thanks to yall as well for helping us boonie dwellers keep up