12:32pm HOH Brit and Matt going over the POV ceremony and Andrew’s Speech. Andrew said in the speech that he’s going after B/R. Both Matt and Brit believe he was sincere. Brit brings up next weeks HOH might have it pretty easy because everything is starting to unravel. Matt keeps saying that Andrew is a weird guy, “he’s emotional and moody”. Brit:”if I win HOH i’m not taking any risks .. unlike you matt no risk no rewards”. Matt points out that if they start seeing B/R trying to keep Andrew then they know they’res something going on. Brit mentions that Andrew’s POV speech had little digs directed towards matt, “He pretty much told us all that you were in an alliance with B/R”.

12:47pm HOH Andrew and Matt Matt congratulates Andrew on a good speech. He tells him that he’s gotta start working the house for votes because people are thinking about talking him out and MAtt doesn’t want that. Matt laughs at how Rachel was huffing and puffing during Andrews speech. Andrew “She’s just a actress” Matt “yeah and a poor one at that”. Andrew reassures him if he wins HOH next week then matt is safe. If the vote comes to a tie and Matt keeps him he’ll use that as a sign that he can trust Matt. He asks matt to keep his eyes and ears open and report to him anything that is going on. Matt explains to Andrew the angle he should take when campaigning. Pretty much Andrew needs to tell people that if Kathy is left in the house then in 2 weeks after the stronger players are gone people will start gunning for “BLANK” (whoever Andrew is campaigning to). 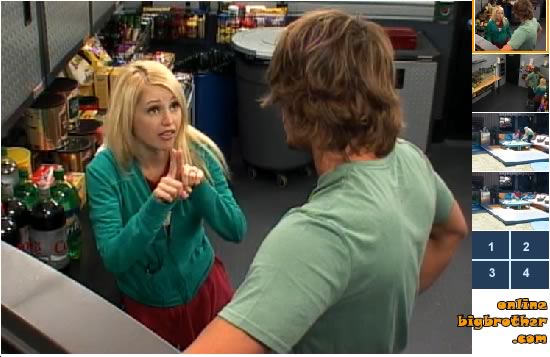 12:45pm Storage Room Brit and Hayden. Brit’s telling him that now that it’s obvious that Andrew’s speech was a act. hayden agrees, she tells him that brendon and Andrew are together and that speech proved it. hayden thinks it’s too big of risk to keep Andrew and he doesn’t think that Kathy is a guaranteed vote for B/R. 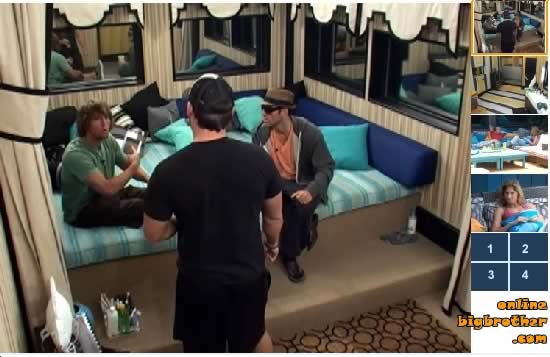 They have finally figured it out that the entire speech was an act.. (Cmon Brigade gets shit rolling yo) Lane: “they just gave it all away right there”. They all agree ANDREW out!.. yo

1:00pm Kitchen Brit, Lane, and Meow Meow.. i’ll sum the conversation up with just one quote from Lane: “They planned this out since day one they are all together”. lane and brit both agree the other side just showed all their cards during that speech. Lane says now America will see that they are the dumbest people on the how. Brit :” There so dramatic!” Brit is starting to speculate that Matt is in on it to because Andrew was trying to throw Matt under the bus. Lane isn’t sure.. Enzo chimes int about not every being able to talk to fucking Matty in the HOH there’s always ragan up there talking.. yo .

Things are getting good now folks.. once they find out about Matt biam.

Finally!!!! I wish the brigade would dump Matt and pick up Britney and Kristen (officially.) Leaving Matt and Ragan alone, and Brendon and Rachel alone. Let Matt think he’s still in the brigade and put Brendon and Rachel up one week and then if they win the veto, backdoor Matt. Mwahahahaha. They could keep Kathy, drag her along to the final 6 for the votes and then evict her.

frustrating…the idiots on the majority think its a crime to be a friend to B and R…just wait till they elim andrew B and R….then they may have to play the game

except for kathy of course

pleaseeeeeee figure it out people. Matts is playing the game unlike u guys. so so naive. People get it together and stop worrying about what the others are doing and start playing the game or ur all going to be picked off one by one.

I just think kristin etc are hypocrits…they are all ove rB and R, yet are doing the same thing(voting together…they ARE a pair)…then matt is playing the entire house….its time a few of them stop pointing fingers at a couple particular people and realize there ARE others in the house….

I fear a summer of Lame, Brit and others bashing people and sitting around with kathy. ya know

Other K
Reply to  akeg

I’d prefer that over a summer of Rachel’s voice.

Brit and lane sitting around bashing everyone is pretty much the highlight of the show, sorry to all the anti bullies out there but seriously the make me lmao

Britney and Lane are my favorite! They are sooooo funny together.

I know! I sort of wish that Brit wasn’t engaged.

Great, Andrew is one of the few that is mildly entertaining and now he will be gone! The Brigade is a joke. I hope they fall apart soon. This season has been very lame compared to last season. We need more drama and fights! This cast even makes me miss Ronnie!

LOL Really? You miss Ronnie? Oh no way. We have Rachael and her dramatics.
But, I am with you about the Brigade! They need to be outed so we have a real fight in the house and then it will be game on!
Please Big Brother make it happen!

I am sorry but andrew is not entertaining. he was mia the first 2 weeks and now he is somewhat around, screwing up his game. his comments are a bit contrived and awkward for me

I don’t get it, what is Matt doing wrong other than protecting himself? Has he betrayed the Brigade? What the hell did I miss?

Matt is playing both sides to protect himself.

He made a deal with B/R and as a member of the brigade. He’s safe from basically everyone for a while until they find out he is playing them all.

Matt is playing both sides of the fence and too soon in the game. He will be just like Russell played both side and like a snake they handed him his head! I thought Matt was smart but he’s looking kind of dumb right now!

Kathy voted to keep Monet, Brit isn’t gunning for her.

Brit figured out the whole thing was an act! Now the Brigade less Mr Hand are on to the BG/B and Capt Kosher alliance. Can’t wait to see this speech. Did Andrew actually threaten to go after BG/B?

See Rachel’s mouth? Was she birthed or did her parents reel her in while on a fishing expedition? Go figure!

Come on – everybody knows that the person going home will be decided by Alison? Just like she has already decided who will win. It is the only way for her to maintain control and prevent another “Chima” incident. To get rid of B ^ R at the same time, is to put them both up, Get Brendon out and guarantee He-Bitch will go with him. A “twofer” as she would call it.

I agree with you. I think the winner has been decided. I’ve lost interest in the show. I’m tired of BB shoving Rachel and Brendon down our throats. They are not believable as a couple. They are way over the top with the constant pecking and rubbing. They are nothing like Jeff and Jordan from last season. Jordan was likable.

Her mouth!!!! What’s wrong with her??? SHe’s so stupid…. No, as a matter of fact, she is not stupid, but ”in love” because she’s the one who told Brendon about Matt.,,,but then she went with Brendon’s theory…I hope she will begin to play her game and stop taking Brandon’s decisionssssssssssss

Out of all the applications to appear on BB12, I cannot believe that the producers or whoever picks the HGs thought these were the best ones to be in the house. It really must have been extremely slim pickings this time. I can just imagine what the rest of the ones were like who didn’t make it. Kind of scary. LOL!!!

I don’t like the fact they all have ties to showbiz, modeling or beauty contests.

I would rather watch every-day people in the game. Each of the people in this house are ‘nice’ to look at. They’re fit and good looking. They all have high paying jobs.

Why not have normal people in the game?

I want a Burger King cashier, a shipper/receiver, a factory general labourer, a janitor, etc… mixed in with stock brokers, college professors and ‘models’.

A wider mix of ethnic groups as well.

Red, I saw several of those trying out and there were many interesting people. They had a game plan to include high educated people this year. I don’t know if they got it right or not. They do go for looks because they feel that people won’t watch plain looking contestants. I don’t think there was slim pickings, they just had an idea for the show and they went with that. Perhaps they have learned a lesson.

I agree. this cast is pretty boring and has no backbone. If you want one of 2 people out, put both of them up. who cares who leaves. I hate to see what the rests of the cast that were not chosen are. I really don’t care if andrew leaves. In fact, eliminate all of them. They are worthless. The only ppl I like so far is meow meow & Brit. So far, the 2 figured many things. The rests are sitting on their brains.