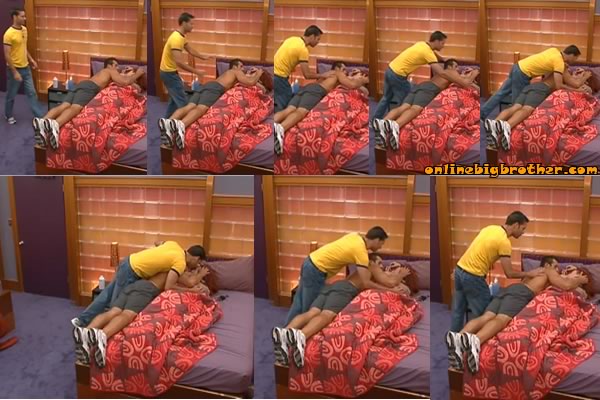 1:17pm taj Room Andrew walks in and kisses Rachel on the cheek ANDREW says “You Overplayed it, YOU OVER PLAYED IT!!!” he leaves and Rachel cries.. Brendon tells her not to worry. Rachel goes on and on about how everyone in the game is so manipulative she’s not able to be that way… groan.. mute.

1:20pm Backyard couch Kristen, Matt, Hayden Matt is telling them why they need to figure out where Andrew’s alligence is but he thinks they should keep him. Matt explains the same reason over and over again that if they keep a weak player then sooner or later the strong players are going to come for Hayden and Kristen. (LOL there not buying it now) Hayden asks if he believes that Andrew’s speech was a act. matt doesn’t think so but he thinks that Rachel was acting to try and be dramatic. Matt says it be be an act on Andrews part, but he is so weird that you can never really tell.

so what happened? Andrew acted like he was going after brendan & rachel or.. what? idk what’s going on. who said who overplayed it? the typo says ehs lol

opps sorry it was andrew

ha I always miss the good stuff on the feeds, so andrew thinks rachel acted too dramatic & gave away his act… I can’t wait to see his speech on wednesday

Yeah.. and now everyone is onto Andrew/B/R allaince… Matt was just telling enzo 3 minutes ago that he would rather Andrew goes home now and not kathy

I think Andrew dug his own grave! Looks like the house will keep Kathy, may be a smart move.

Yeah, who else will feed the fish and do the laundry.

Simon, seeing Andrew (topping) bending over Brendon – now that was the hot! They (Andrew & Brendon) have more of a sexual chemistry than than Brendon & then he-bitch. I know you guys don’t really care but I have a point here – I say this not because it was two guys, but because between these two PEOPLE there was a natural chemistry. Also, because of Brendon’s protectiveness (caring) of Andrew it reminded me of what made Jeff and Jordan enjoyable to watch as their relationship grew. Jeff and Jordan were attractive both in appearance and personality. Yes Jeff was sexuality attracted to Jordan (a given) and vv, but it was their ability to show how much they care for each other without being in a constant stay of sexual arousal that was most appealing. The way they talked to each other – their respect for one another, etc. They didn’t make me feel dirty or voyeuristic, nor did I want to hose them down everytime they were on camera. All the thing B&R are not.

Very well put, I totally agree with you on this one!

Agreed! I loved watching BBAD last year just to hear the interactions between Jeff and Jordan. I still record BBAD, but rarely watch it. The constant rutting between B & R is not entertaining and Rachel is beyond annoying. There is no way that girl is bright enough to have become a chemist!

True and I do like the thought of them two together.

Totally agree jimik60. I enjoyed Jeff and Jordan. B/R is just a puke fest. She is too much. It seems like her tears are an act. She breaks out the tears to make B think she’s a good person/sensitive.
Blah, blah…This season isn’t great, but I’m addicted to the show…so I’m watching.

Rachel an honest player?? I don’t see why she wants to be called an honest player thats not out to manipulate people when she lied about kristen wanting to vote in Monet’s favor and caused the whole house meeting

I hated her in the beginning, but now I find her to be one of the most entertaining house guests.

I feel 100% the same! Brit got on my nerves so much at first but now I think she is funny, witty and just smart. I hope she goes far!

I HATE Her too! She is such a whiny little bitch! She honestly thinks She’ll be kept???

Brit is the funniest and likely the smartest player in the house this year. She may not be booksmart but she sure is BB smart and that’s likely going to take her far. I’ve got to say I initially didn’t care much for her but she had become my favorite. Often she makes the show with her wisecracks and her well thought out schemes.

I’m with Ty. Britney is the most entertaining HG this season. I wish the CBS show would show more of Britney’s comments and much less of B & R!! She is witty, BB smart, and most of all on target with her observations. Mean? Sometimes, but I would much rather watch her than the Bro-gade and showmances.

matt shouldve convinced brendan he wanted to backdoor hayden, then backdoor rachel. brendan mightve figured it would be better to get rid of a strong player instead of a floater.

darn….this sucks…the next 2 weeks will be pretty obvious…everyone wants to target B and R to make the house happy…eventually they need to realize that its a game where ONE PERSON WINS, not the entire house not named brenden rachel or andrew…sigh.

brit is a disgusting person…its sad that when the game is FINALLY played…rachel isnt good enough to fool them…so we go on with the lamest season ever featuring the “brigade” and their “great name” of an alliance as they think it….ugh…it wont get juicy till kristen/ragen are targeted.

The Brigade_LOL! Like there’s going to be 4 winners this season…

Simon great job on the website this shit keeps me updated while im at work and shit….do you or dawg ever get any sleep??

Thanks Steve-o, yeah we sleep not very much right now though

Andrew should call a house meeting as Rachel did and tell everyone about the ”other”couple in the house….this would compromise the ”brigade” and what about meow meow,,,,, what a stupid name….

This annoys me. I don’t really like B&R, [[maybe brendon without her]] but I don’t like the brigade either.I like most of matt’s strategy except for the whole disease thing. His cockiness is what makes him annoying. I don’t really like anyone except for ragan because he is amusing and andrew bc he’s so odd he could be entertaining. I want him to stay solely for that reason and for something to shake up the house. Maybe him winning HOH and outing matt’s lies and somehow the brigade too or them breaking up. Something more than the whole, everyone hates B&R thing!

Let’s all start calling Alison, and when she answers hang up!

yes, matt always has his hands down his pants. what’s up with brit, her hands are also in her mouth, gnawing on her fingers! gross! and playing with her hair.

Matt in a few years. After losing BB due to outsmarting himself, he ends up in a crap job in the suburbs, where he mopes on his couch wondering “what might have been . . . ” http://www.mpomerle.com/Auto/Pictures/Ed_Oneil.jpg

i think Rachel and Brendon are trying way to hard to be jeff and jordan. They can not even compare to them. I really liked matt but since the disease thing I think he has to go. That is just AWFUL. Also, I hate the brigade. Not such an enjoyable season so far. Annie was my favorite!!!!