Up in the HOH, Britney, Lane, Hayden and Matt are talking about random stuff. Britney explains that the HOH bath tub is amazing …that it is like the hot tub but without the pee smell. Meanwhile, Andrew is in the kitchen all by himself contemplating his next move… 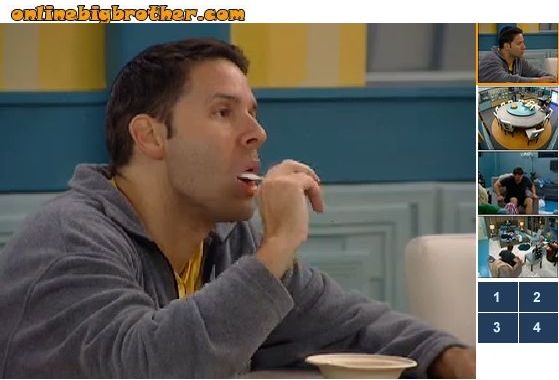 12:30pm – 12:45pm Andrew plays pool by himself, while Kristen is feet away laying out on the lounge chair suntanning.  Kristen is squeezing a lemon into her hair.  Kathy yells across the yard to ask what she is doing.  Kristen tells her that it lightens your hair. Andrew is now wandering around the house … he goes to the have not room …then goes to the bathroom.. When he comes out Kathy comes in and goes to go to the bathroom and he tells her not to go in there. Andrew says give it a few minutes .. Kathy says that she cant wait …and goes in. Andrew then heads up to the HOH room balcony and plays chess by himself…

Wow, I love me some Brendon,but man is he REALLY that stupid? Andrew basically told him that Hayden and Kristen are a showmance and he shined it off. Both Brendon and Rachel are really naive and want to beleive people no matter what..except when they are in his alliance. Dumb butt

Any effort Andrew puts forth at this point will be seen for what it is: A last ditch desperate move to stay in the house. Apologize all you want but it’s a pretty transparent, useless move.

And no offense to the gentlemen on this site but if I had to share a bathroom with 6 guys I would commit suicide by jumping off the spiral staircase onto the beaks of the pink flamingo’s. Ew.

I don’t think suicide is a joking matter…. it is a mental health issue.

She could probably get Rachel to push her then, Rachel is nice like that :)

I can’t believe Andrew basically told Brendon about K/H & he just kept talking like he didn’t hear anything. He’s such an effin dumb ass.

I just posted this under another heading, but I think it deserves repeating.

Andrew and Brendon must be related somehow, either brothers or cousins in real life.

There’s a physical resemblance for one thing. Also, it’s strange how they seem to have work together without talking about it, at least until the conversation reported above. The POV speech was obviously phony and Brendon supported Andrew after it. I also recall how Andrew kissed Rachel while Brendon was lying on top of her – – there’s no way Andrew would do that or Brendon would let that happen unless they were related somehow. I also recall how Andrew celebrated when Rachel won HOH when there didn’t appear to be any reason for it (I haven’t watched the feeds, so maybe I missed something). Also, didn’t Andrew let Brendon win the POV, even though it was in Andrew’s best interest to win it himself? Something’s fishy!

The Excitement
Reply to  LilBro

Interesting. I had thought of the possibility that perhaps Andrew and Ragan are gay lovers. Because you never see them together that much. but the past couple days they’ve talked and it seems like Ragan will vote against Andrew, so maybe my theory is out the window.

I agree with you, something is just not right. Guess Rachel will finally get the”unexpected” she is always talking about. I don’t think the brigade cares about Hayden’s little thing on the side w/ Kristen. What else could be so “massive”? Rachel will sh*t if Annie comes back, that would be massive.

What about a relationship of some sort between Rachel and Andrew? Friends, family, something?

I say that BG/B are so self absorbed that they can’t see beyond their own perspective. It isn’t naivete they exude it is more ego-maniacal behavior. :::::: They need some serious counseling or they’ll end up in recruited into something bizarre where the evil Jack Bauer says they have to use their special abilities, that only they have as dry humping physicists/chemists, to save the world. Only it will be some sick cult instead.

@ BBFan, Talking about commiting suicide & jumping off the spiral staircase is not cute or funny !!! My 23 year old neighbor just hung himself in his garage Monday & his girl friend & three year old are now alone. Why people don’t think about what comes out of there mouth hurts others. I ran to help but was to late & i,m 67 years old & I,m having a hard time & thought I would get on here & read & now there’s talk about ” Suicide ” Please, if anyone feel’s that bad or hurt & your thinking on those terms,,,please think about people your hurting & talk to someone. We care !! God Bless!!!

Sorry to hear about your neighbor, what a tragic thing to happen.

I am so sorry about your neighbor.

It is very tragic, but I don’t think the BB spoiler website is the place to go for support over something so serious and sad. Have you thought about joining a support group in your area? Not trying to be cold, but this is just a fun little site to share thoughts about a goofy reality show. You’re not likely to get what you need to help you cope here on this site. People are always going to crack jokes about suicide, murder, all kinds of other sick shit – almost everywhere we go; we cannot control or censor this.

I think the person who posted the original comment should apologize. Fun is fun, but come on let’s take resposnsibility for our own actions. This isn’t something you just rationalize away!

Are you kidding. It was a joke, said in a joking manner, on a site created for fun. Get over it. I happen to have mental health issues in my family and I am not worried by a comment like that. It would be different if you imply that some one else should do that, in a mean way. Can’t we agree that this is a site for lighthearted entertainment and let’s not take it so serious that we gang up on some one for a possible poor choice of words.

so sorry judy. we had three people on our street kill themselves last year. it was rough not just on the family but the community in general. it is always hard to deal with loss especially a loss that doesn’t need to be.

I am sorry to hear about such a young person giving up on his future. Sorry you had to witness that and I know your sense of helplessness. When my husband and I were in our car accident I could not get our truck off of him and he was pinned in a river. I did what I could to help the other person in our car and he is alive today, but sometimes it is just someone’s time to go. Time will heal the memory of that day and put it into perspective. I am still in disbelief over our accident a year and a half later, but I know that mountain came down on us because it was my husbands time to go.

OK so jokes about suicide are now off limits. How about self-mutilation? I want to stab myself after reading that. But not to death. No, I’m too sensitive to your needs.

Wow….just wow to all of the above

insensitive goes to the have not room and sits down on the cot and stares at the floor. insensitive starts crying.

hahaha that’s a good one, Moan….need to break up the tension on this page, yo ;)

Sorry to hear about your neighbour, but this is not the time nor place. If you do not want to hear/read things that you think will make you upset don’t read the comments. The entire purpose of the comments section on any blog or website is freedom of speach and allowing those to say what’s on their mind. This is a silly site, where silly people come because they have a common interest and they are going to say what they want. This person who made the comment should not apolgize as you all know full well that it was said in a jokingly matter…now if you are having such a hard time dealing with this I strngly suggest you go to a doctor and get some professional help instead of trying to ease the pain with such superficial means and making us all feel like shit because of something that happened to you. People commit suicide everyday, we all have or will have to deal with in in some way and I personally do not feel like having to read about such a tragic expereince on the site I come to for pure pleasure…these a reason why they don’t report on suicide in the news and those same reasons should go for this type of media outlet as well. Not trying to sound harsh this comment just really put a damper on the start of my day.

I hope when Andrew gets evicted that he says “Oh, and guess what… I was the one who left that big suprise in the toilet the other day!”, as an F-You to Matt.

Kristy
Reply to  The Excitement

LMAO now that would be funny!!!

Andrew will probably tell the other HG’s that he is a podiatrist and that Matt is lying about his wife being sick.

does he know the truth about Matts wife? im thinking he’s going to out Kristen and Haydens showmance….

im liking Enzo more and more these days, and Kristen too. she had every right to stand up for herself against Andrew. I do like Andrew though, and wish he could stay instead of Kathy… really doesnt look like he stands a chance though.

Andrew said the other day that the name of the disease that Matt’s wife “has” is not a real disease.

I would love for Andrew to expose all he knows to other houseguests before he leaves. Does he know about the Brigade (4)? If he does, he should tell them all who they are and that they plan to be final 4 and pick everyone off one by one. Might get other HG to start changing their tune. Would love to see Rachel go and let Brendan play the game on his own and not be so p****-whooped. I don’t like Matt using his wife’s (fake) illness as sympathy in the game – Maybe Andrew should call him out on that and the illness Matt said is a myth. In otherwords, I would like to see Andrew leave with the house in turmoil and everyone questioning who to trust. Although, they would probably all just say he’s making it up because he’s angry. Who knows?

u people need a pshyciatrist! call your local mental health facility. quit cmon on here tryin to get sympathy! we all have tragedies in our life. but this aint the place to come to for it!

keep up the good works guys. love the site.