5:45pm Storage room hayden and Lane Talking about what would brendon do if he wins hoh. Lane is betting he’ll put up brit and kristen and they can keep Kristen. Hayden thinks it might be Kathy and Britney. Lane isn’t sure about that kathy is pretty useless. Hayden says that would be great if thats who he puts up (Kristen and Brit), Lane “yeah we’ll lose a jury vote in Brit but thats alright”

lane we can use matt and Enzo for 2 more weeks into the jury. Hayden isn’t sure about Matt anymore he says they spend almost all their time together. Lane thinks that when Brendon leaves ragan will have no one beside MAtt and he can see matt telling him about the Brigade. 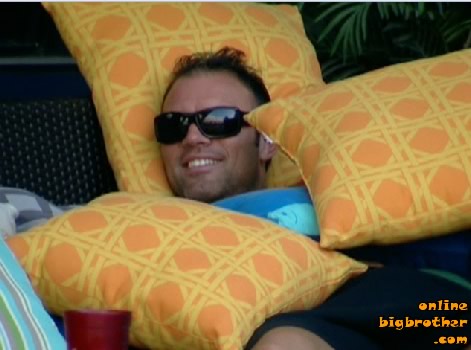 6:00pm kathy and Enzo backyard couch yo… you know.. Enzo asks her if she’s going to be a movie star after BB is over. Kathy laughs says she has no acting experience. Enzo thinks they might propose a movie roll for her, it could be like a sheriff in a movie. kathy says she doesn’t even get called into the DR to often. Enzo says it could be worth some money fuck it i’ll do it to. They continue to chit chat about things..

7:00pm Kitchen Houseguests are either playing pool chatting or in the kitchen eating dinner engaged in conversation. Brendon is telling them about his friends that have kids that buy them all this shit they don’t need because it is a way to compensate for not spending time with them. He doesn’t think they have much of a choice because they have to work so much to provide a good life for their family’s.

Onlinebigbrother.com is around because of your donation every year the site costs us to host the images and run the servers needed to handle the traffic. If you like the site then please consider donating to keep the madness going. Thanks!

Why does every housequest in this season THINKS that they are gonna become really famous? . UMM they would only get not even 15 minute but maybe 5 minute of fame. Stop acting like yah are some big A listers.

If Brendon saves Capt Kosher (he wont of course), and Matt noms Rachel I say Kathy still goes home. Did Matt promise he wouldnt put her up for eviction?
Capt Kosher is interesting because of the ethical dilemmas from living in an environment where you prosper by lying & deceiving vs his religion. Britney I like cuz shes cute, hot and mean. She looks right at home under that tiara.

IT S A DONE DEAL. BRENDON DID NOT USE THE POWER OF VETO, IT S KATHY OR ANDREW.

LATE. pov is over. noms are the same.

That is the single biggest problem with BB this year, house guests dreaming and scheming of fame instead of being their natural self. If R were a sexy scientist then she should be pulling chemistry tricks and wowing American with her skills rather than being dumb. And how about everyone of them saying something about “if any opportunities present themselves,” come on! Be yourself in such a way that American can’t get enough of you, then start prospecting. Just because you showed up doesn’t mean your special.

sadly matt is outed as someone playing the game because SO FEW are actually doing so.

its almost brutal watching rachel diss brenden and talk over him about people being different….I give this relationship 1 week in sequester.

I think B or R will get HOH next. I was hoping for Andrew to get it but it looks like he is going home. Kathy sucks she doesn’t do anything to make the show more entertaining. I want to see the brigade blow apart and have a huge fight. Matt or shaggy/Hayden I think will be the first person to throw his alliance under the bus.

I agree. Kathy has to gooo.
Bridage sucks.
I mean who the hell calls themself “meow meow”
i laugh so hard when he said that. lol

Didn’t Brit just say how America prob thinks she’s a prissy princess because she wore a tiara now she’s wearing one again, she’s soo fake after r/b leave she better be next

Exactly what I thought when I saw her wearing the tiara. Which 1 is it? Are you the cool, down to earth chick or are you a wanna be princess? Ugh. I hate these BB players. This year sux donkey nuts.

rachel basically talks to brenden like hes six now….wow…Its really hard to watch, I thought the kissing was bad, but goodness…this is far far worse…if he says ANYTHING she says “well duh brenden, im not stupid” then goes on about how stupid brenden is for arguing with brit…really?

she expects him to just be her “yes man”…he cant have ANY emotions…anyone who has been in a bad relationship, can atest to rachel’s behaivor…YUCK!

Ive changed who im rooting for to…..Enzo…why? I dont know…

BBAD…..HE THINKS SHE CHANGED HIS LIFE. SHE S PERFECT FOR HIM. YA A COUPLE OF DUMB ASSES. IF HE KEEPS GIVING HER THOSE STUPID NOISY FAGGY KISSES I M GOING TO PUKE

This whole season is one big pussy season! And to top it, the one guy who thinks he is a basass with his tats is a 4 foot munchkin troll liar! WAJ BB!

I just tuned into Showtime After Dark and looks like trouble in paradise for R&B. Brendens clingy cheesy behavior seems to really be getting on Rachel’s nerves. She just stormed off from the hammock after he brought up marriage proposals.

CAN YOU IMAGINE A NORMAL MAN PROPOSING AFTER 4 WKS. THERE IS SOMETHING SERIOUSLY WRONG WITH HIM. DO THEY GIVE PSYCH EXAMS BEFORE CASTING FOR THIS SHOW CUS HE S NUTS

Britney and Rachel in the HOH tub taking a bubble bath.

They’re talking about how irritating Kristen’s laugh is.

Andrew’s doing work on getting votes, but I really don’t think he’ll get them. The Brigade sees him as a threat, so they’ll get the votes to evict him. And Kathy has Kristen and Hayden’s votes locked in, and probably Ragan’s. Kathy’s alright for now, but I don’t like Andrew; he seems to be working with Brendan.