9:12pm Kitchen Brendon and Rachel They are discussing the POV competition, Whispering so the rest of the houseguests in the Jumanjii Room can’t hear them. They’re not sure what to think of Hayden’s actions during the POV competition. Hayden took the veto from Kristen during and they thought it was kind of strange because it allowed Brit to take the POV from him. Brendon thinks Hayden may have been wanting to get a better prize becuase he knows he’s safe against most people in the house that or he thought Brit would of kept her prize. Rachel says it all showed us that Hayden is really playing for himself, they both agree that he is greddy and kind told everyone that Kristen is expendable. Brendon says he wants to talk to Ragan but he knows Ragan talks to Matt and Matt is dangerous. Rachel tells him that she’s going to spend some time with britenay and try and figure out where her trust level is with her. 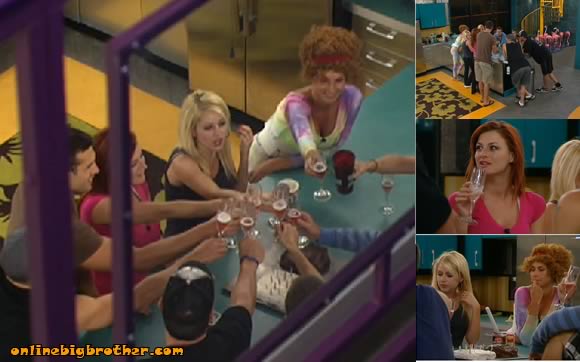 10:15pm Matt’s party going on in the kitchen.. Hayden in confinement

10:24pm Pool Table Lane and Enzo Enzo talking about how good that German beer was. Enzo asks what the fuck were they talkign about.. Backdoor? Lane says he heard they were talking about taking kristen off. Lane says he had talked to brit earlier in the day and she was asking him if he thought that kathy and Kristen would try to get her to use it. He told her sure they will she replied no fucking way will I use the POV. Enzo says he was talking to Hayden through the wall and hayden was worried about things outside the have nots room, worried about what kathy was saying. Lane tells him that he was talking to Kathy and she said that B/R want to backdoor matt ot me. Enzo what the fuck does kathy know yo. Lane if i find out they are coming after me i’m going to go off. Enzo “yeah me to yo”.. Enzo: “Kristen was up there for a while with tthat Bitch.. what were they talking about”

10:45pm Have nots/Jumanji Lane and Enzo yo hayden telling him he’s starting to think about next week. This week Kristen is gone there isn’t anything they can do about it without losing a Brigade member. Next week Hayden is going to approach B/R and tell play the “I have no One card” He’s going to tell them he’s alone, that they need him, and if Brendon win he won’t out hayden up. Once he can get brendon and Rachel to be his friends he’s going to influence them to not put Lane up if Brendon wins HOH. This is going to distance himself from the brigade a bit put should keep them safe. He thinks the B/R will be after Matt. Hayden asks him to keep what he’s doing a secret, “I hate talking to the wall man” Lane “no Shit” Lane wants to bring the brigade out soon he’s sick of Brendon it’s killing him. Lane:”He’s walking around with her like their the shit” Lane wants to go up to brendon tell him to fuck off say where 4 in the jury house

Say what you want…but every week they decide who goes home. The first week they removed the saboteur, then they decided Monet over Britney, then they decided on Andrew. The truth is, as long as there aren’t two of them on the block together, and they vote as a unit, they have power whether they win HOH or POV or neither. Plus, they’ve kept their BS side alliances up until this week. Hayden had Kristen, Lane has Britney, and Matt has Ragan. They’re actually doing very well so far. Yes, Matt should have put up B/R, but I’m sure production manipulates the game. Plus, when and if Kristen goes home, if all 4 of them go to jury, they will decide the game. That’s one thing B/R can not do. 4 in jury is a power move.

They decided on monet instead of brit? brit wasn’t even on the block after POV. I don’t think they are running things or else they’d have B/R out of there. Maybe if they could win some HOHs. And I’m pretty sure Andrew going home was a house decision since he went crazy flakes and annie wasn’t them getting the sabateur out. That’s not why they eventually decided to vote her out… They aren’t running anything!

Winning HOHs? Ah, what short memories we have. So Matt and Hayden winning never happened? You should see a doctor about that faulty memory.

I’ll give you that on Matt winning, but did we forget how Hayden won? He won because the group just decided who wanted money more than an HOH. Hayden came in last. It has nothing to do with his physical strength or mental game play. So he won HOH based on a group decision. Their alliance has not proven anything.

Thank you, thats what I want to know

Kristen looks better in that wig than she does with her normal ……hair…….I want to call her normal look the messed up after sex look which makes her look raggady……She’s cryin to rit right now tho and annoying me with her bad sell!

Guess Haydens greedy game play got him right where he deserves to be also!

Kristen just told Brit use the veto on her and she will back up Brit for the rest of the game.

wow first matt lies about his wife disease, then his b-day? he is disgusting.
i cant believe kristen is also trying to pull the sympathy card (no home or job?), plz, she should have thought about that before she cheated on her bf, at least she would have somewhere to live.

did the guys dye their hair?

Will love for Brit to use the POV on Kristen, and Rachel to backdoor Matt!!

Now securely relocated and settled into our 3rd safe house in the past 2 days, I spent this morning, reading current enemy Intel, and preparing for a relaxing day at the local country club (business “power brunch” with Chenbot & Mooves, followed by a quick set of (tennis) doubles against the Mooves, and finally, cocktails and a winner take all game of “Survivor Mahjong”, by the pool. Since “Richie” and his in-town rental “Gage” asked for some “alone time”, it would be at least another 2 hours before ETD. Since my OCD was beginning to kick from all the stress from the past 3 evenings, I decided give my travel-size set of Mahjong tiles a quick polish, and then coordinate a few separates to change into at the club (should the game (mahjong) get ugly, or our security is breached and again we are relocated). In the time remaining, I decided to figure out my answers to the survey you (Simon/Dawg) mentioned you were going to start, to nail down which of the 5 established camps, we fans our “hitching our wagons to”. You mentioned that currently there were 5 separate camps of possible winners. They are:

1) BoyGeorge/Brendon
2) The Brigade (Enzo – only original members – Lane, Hayden & Matt)
3) Kathy/Kristin (Hayden)
4) Lane/Britney (sucking up to BG/B)
5) Matt/Ragan (who has infiltrated all 5 camps).
Now, I just need to figure out (based on social ability, strategy and competitions won) “If I had to vote TODAY for this season’s winner, who would it be? . . . . (To Be Continued)

I choose Lane/Brit playing both R/B and the Brigade until they are outed and then have to go it alone. They are a great country mouse/city mouse combination!

I appreciate the “4-Deep” Shout Out in the heading dude. Thanks. Very cool.

why does Rachel make those faces.

Rachel can’t help it cuz that’s just her actual face…the botox must be wearing off. lol

once again, full of grammatical errors and totally void of sentence structure and punctuation…difficult to read this post

Sorry you’re not happy with the posts.. Maybe try out the feeds for a day or to it might be more to your liking.

kicks Brian in the arse. When you want to complain about grammar and sentence structure, one must use it themselves or you’ll end up looking like a douche with people pointing fingers and laughing at you. Stop complaining and join the fun. You’re it!

Geez Louise ——–this is not school – this is simply mindless fun……..I do have a question for you, though…..where do you park your high horse?

I,m just lost on this years bb, . It all sucks. I don’t get were CBS got these people, but not one person is normal. Maybe they should be themselves & not try & copy past bb guest. Brit, is the only one that acts normal. Poking fun is something they have have done from each bb show. And if Rachel thinks VIP is a VIP, she is crazy. Hell I can get a VIP Pass to the Nascar Races.That dose not mean I,m a VIP. OMG, she has got to go first then her man so the guys can see the true side of Brandon. Then when he gets out he”ll leave her funky ass be. Oh YUK !