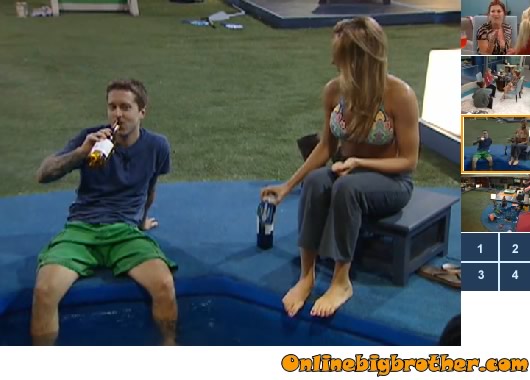 10:30pm Hot Tub Enzo, Hayden, Matt and Lane Talking about the votes. Matt asks HAyden how certain he is that Kristen is going to vote to keep him. Hayden says he’s 100% certain, Matt still asks him to talk to her to see were she’s at. Enzo said he’s been working on Kathy for her vote but thinks she’ll vote with the HOH. They start talking about Annie and how the “old” Annie was better then the “new” Annie. They list off some of the crazy things Annie was doing. Kristen joins them with two bottle of wine, she gives one to MAtt asks him if he’s drinking it straight out of the bottle. Hayden mentions that Matt’s had such a hard day, Enzo no doubt he’s drinking out of the 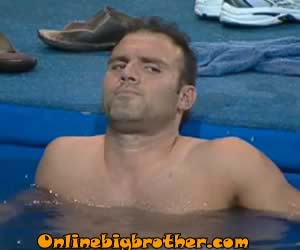 bottle after this “sorts” of day. When Kristen sits down she tells him her vote still stands she’s voting Monet out. They all start takign about how the meeting was a good thing cause it broke all the tension. Matt said that was a crazy experience, They say he was shaking because of the adrenaline. Enzo says that Matt’s got balls to stand up against that firing line. Matt makes a joke about production giving them liquor before the next meeting and how much more interesting it would be. Brit joins them and they start chating about food.. fish sticks are brought up and Brit talks about a tampon commercial where a girl plugs a whole in a boat with one. Kristen starts talkign about mean balls and how they hang and move.. cams cut to Hayden and Lane in the kitchen talking about making pizza,.

Enzo: “he’s so fing hammered tonight you could fck him”..”maybe not fck him but definitely finger blast him tonight”..
Ragan: “When he wakes up say hey Matt smell my finger what does that smell like… heheheh its you”
Enzo: “What a shitty thing to happen to Matty he gets sent home and f-inger b**sted”
Enzo jokes that Ragan should just go lay beside him and when he wakes up just say something happened. Ragan Laughs.. Brit says no take him into the cabana room then everyone will walk buy and see it. 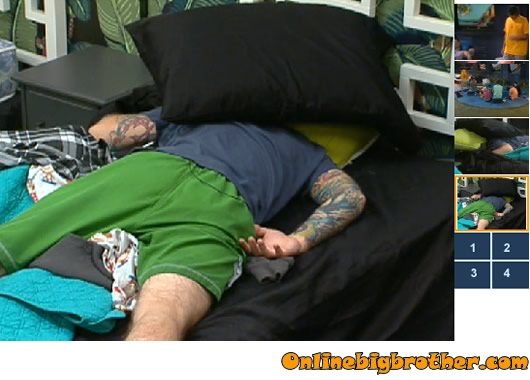 Enzo and Britt is funny az hell. Matt makes me want to get hammered, hahahaha. Watching this crap can do it to a girl.

ya enzo and brit are hilarious, I would have no post titles if it wasn’t for them

He is going to wake up early tommorrow….he went to bed at 11:35pm, damn

Enzo had me in tears with that comment! HILARIOUS!

Aww Matt. He better not get voted out this week.
Enzo is too freakin Hilarious.