6:15pm HOH Enzo, Hayden and Matt. Enzo does most of the talking here and is getting pretty excited. 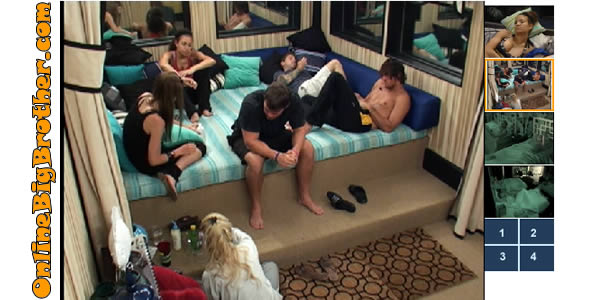 Enzo and Matt are trying to convince Hayden to backdoor Annie. Enzo says it’s time the Brigade to make a power move and tell the other players they are here to play the game and win. He tells them that they have the numbers to get Annie out. He points out that most of the girls are onboard to evict her so there won’t be any bad blood. He’s also certain that if Annie goes home this week then the girls would turn on Rachel and put her up. Matt corroborates this and says that the girls all hate Rachel. Hayden thinks about it he’s nervous about making a big move like this. Enzo assures him they have the votes for Annie but for Kathy it’s iffy. Hayden says it might be a good idea to keep Rachel since she’s so close to Brendon they could break a deal for a couple week with him incase they don’t get HOH. Enzo agrees he says that Brendon and Rachel are a item now… he sneaks in something about Annie and Andrew both being the saboteur… (Enzo’s really running hot right now) Matt explains how stupid they would be if they put Kathy up as a pawn and She goes home. Enzo agrees he’s not convinced they have the votes to evict Rachel. Hayden is now convinced that they have the votes to get rid of Annie and it’s the best thing for “the Brigade”. All three are getting excited about their alliance Matt boasts that it’s the greatest alliance ever in BB history he tells them that its a BB first an alliance from day ONE. 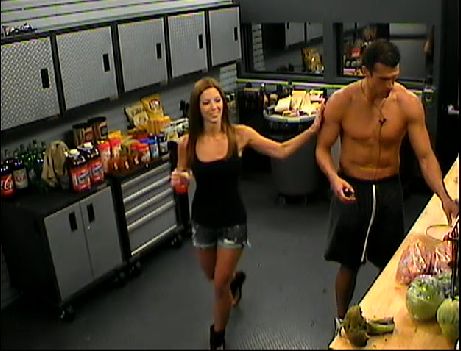 Britney Joins them. She tells them that Brendon is working the girls trying to build up trust and deals. Matt chims in about Brendon treating matt like he’s scared of him “fuck that i’m not scared” Enzo says he thinks Brendon is deep down a nice guy and isn’t the type of person to sneak around telling lies… he mentions that Andrew is a idiot. Enzo asks Brit if she was HOH who would she want out. She says she doesn’t kow but this week she’ll do whatever Hayden wants cause he’s HOH. Enzo makes it clear to Brit that he wants Annie gone this week, he points out to brit that Annie has an alliance with Brendon and Rachel that is why they need to put both those 2 girls up but by keeping Rachel they gain Brendon’s trust for a couple weeks. 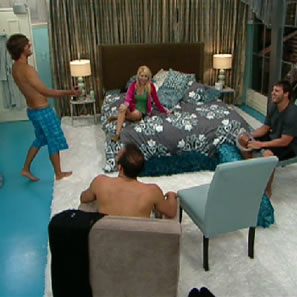 6:35pm HOH Brit, Lane, Hayden, and Enzo pacing around the room. Once Lane enters they stop talking about backdooring Annie. Instead they discus Andrew and how he’s the target next week. Brit brings up how Andrew yelled at her today. Enzo still pacing around Hayden leaves. Enzo asks them what will Hayden do… what if he puts up Annie who are you going to vote against (directed towards Lane) Lane answers ‘ANNIE”. Enzo leaves and Monet enters. Monet asks them what is going on with Enzo and hayden? Lane says that Enzo has gone wild he’s playing so hard right now. Lane says that 2 hours ago rachel was the target and now Annie is.. “those guys are getting way too paranoid” Brit tells Lane to not go off and tell Annie this conversation, he says he won’t. Brit Explains to them both how Annie has been making alliance with everyone trying to pit side against themselves and in the mean time she’s positioning herself nicely. Lane brings up that rachel will be going after Brit and Monet if she gets HOH, Brit knows that but she still thinks Annie is the bigger threat…. groan back and worth about Annie.. Lane tells them that Enzo is doing a good job of making himself out to be a giant target.. he suggests they all play it cool for awhile.

6:55pm HOH Monet and Brit, Brit is pissed “Mother fucking ENZO… WHY did he tell Lane about Annie???!!!” Monet says that Enzo’s been talking too much. They both agree that the guys are getting too paranoid and they are going to make Annie think they will vote for her to stay that way they look good incase the guys flip flop and want Rachel out.

Thats why he was casted? ….can you say saboteur? Possibly??