Standard B/R Flirting, snuggling, kissing, hugging, whispering lovely things to themselves. Ragan joins them says POV will be used unless one of them wins. Brendon knows that he’s glad he has a shot though. They start to discuss the previous years POV’s. B/R have a strategy for the POV game called Hold ’em and Fold ’em. Ragan says it could be a golf based game or a counting game. Rachel says they’ve been going over everything in the house and she’s sure they have it. Ragan explains the counting POV last year where Jeff won, the secret was Jeff counted the quarters in his hands and then based on hoe much he had he would aproximate the dollar value . Ragan tells them if prizes are involved do not take them just go for the POV. Brendon and Rachel says they are both going after the POV. Brendon “I’m going to be bald with a bazooka up my a$$” Ragan thinks the POV is going to be tough, for some reason Ragan thinks that the game is especially hard this year.

10:15pm Hot Tub Andrew and Kathy Andrew tells Kathy that if it comes down to just them he wants her to win. She tells Andrew that she’s the one they have targeted to evict because she voted for Matt to go home.. she explains that Matt is a snake she voted against him on principle. Kahty “I knew what the risk was I took that risk ” 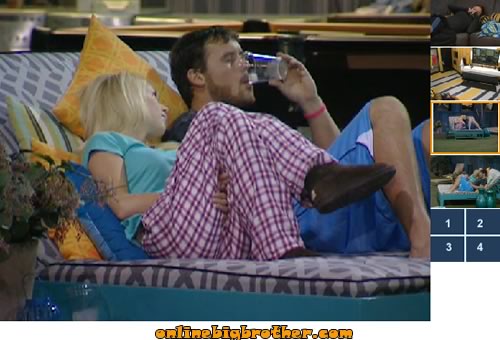 10:39pm Backyard Brit and Lane. Brit tells Lane that Hayden and Kristen are twins. Lane thinks she’s crazy. Brit is Certain they are. Brit mentions their birthmarks, “There Identical” she says. Brit asks him what the fucking odds of that are. She was always wondering why they put such a ugly picture of Kristen up and now she knows it was to throw use all off. Matt joins them. Brit goes over the conversation she had with Ragan and Brendon in the palm room (the post before this one) They all agree that Brendon is by far the sorest loser they have ever seen. She says that every single competition that Brendon has lost he as an excuse for (she’s right he does I’ve heard them all) Brit retells a story about how Lane was showing Ragan how to do some lifts and right after Lane left Brendon ran up to 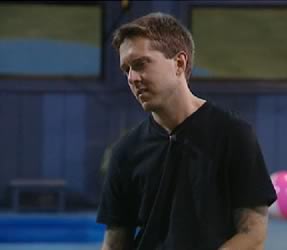 Ragan and told him he was doing it wrong. Ragan said “can you just show me on Monday” Lane laughs at brits story because Ragan had came up to lane and told him about it and how much he hated it when Brendon did it. Matt thinks that america must love Brendin and Rachel because of all the shit that is going …… FEEDS CUT….. when we come back both lane and brit are telling him there is no way that Boy George and Brendon are america’s favorites. Brit says “Rachel is in the DR wasted 3 times a week What the F**k” Matts not convinced, he thinks America loves them, “there the new jeff and jordan” Brit thinks he’s gone nuts, she thinks CBS loves them. She thinks America hates them and Rachel is the lest popular. They start talking game and decide if the POV is used then they will take Brendon out because with him gone Kathy will have nobody and Rachel will go insane. Matt says sorry and leaves 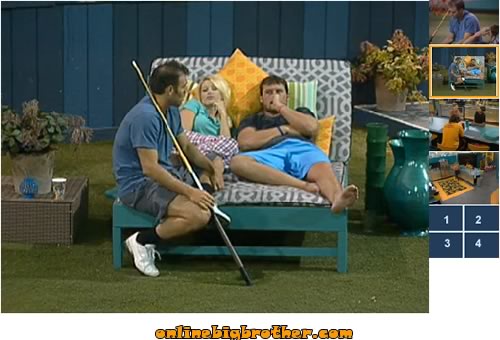 Brit telling Lane that Matt took too big of a risk by not putting at least one of them up.

Enzo joins them and they start talking about who they want to win POV, Enzo thinks Andrew will win because he’s fighting for his life and he knows it. Lane wants Matt to win because then he would of survived eviction, won HOH, WON POV and he’ll put Brendon up.

11:38pm Kathy telling a story about when she had cancer and her husband was looking after he. He had to find someone to operate their timber business so he got his friends to do it. They stole 500K in timber from Kathy… Hayden tells Matt about opening a board shop. Hayden says that business school is hard he has to remember a lot of things.

Andrew is the nicest and most decent person in that house.
Are we so needy for romance that we feel good about watching a cheap hooker type rolling in the bed with a closeted gay that whines about everything?

Ummmm, reread your post. You’re not a person to be judging who is “the nicest and most decent person in the house.”

You don’t know me.
And I don’t care who are you, maybe you are Rachel’s Doctor that did her sex change!

Andy is a religious fanatic, a liar, has accused Matt of being a homosexual, has segregated himself from the house and is socially inept to the point of creepiness.

I agree with you 100%. I also think Andrew will win it all. It may come down to him and Matt and Matt shouldn’t win just for karma’s sake.

Yes we hate Rachel. Her looks, her laugh, everything. She brings Brenden down. Cannot stand watching her on tv!!! She is FAKE!

Anonymous
Reply to  Sick of Rachel!!!

Somone besides brendon or the walking std needs to win pov. I am so sick of them! My grandma looks better than her.

That being said, who else thinks that Hayden and Kristen are in really good strategic positions? They’re both under the radar, should avoid the spotlight for a while, and eventually if the Brigade plan goes well, all 4 members will realize that a final 4 will make them turn on each other, so obviously they will turn on each other 2-3 weeks before that. So in a best case scenario, Hayden can use Kristen to break away and stab one in the back successfully. In a bad case scenario where the Brigade crumbles mid season, Hayden is the hardest one to target because of Kristen. If they let their romance become known, then yeah, both of them could be in a lot of trouble. But if they are very very careful, they both have better odds than almost anyone else in the house, except for maybe Lane or Ragan.

My thoughts exactly about the Brigade turning on each other. Matt is such an idiot for being a self described genius, yet he tells Rachel that he wouldn’t want to be a third with her and Brandon because then what happens when it comes down to the three. Uh, yeah moron, you’re doing that with the Brigade(except four)

FWIW, I think Britany is the biggest bitch in the game, cute as hell, but a bitch. Everyone I know, personally, that watch BB12 likes Rachel/Brendon/Andrew/Ragan. Hates or doesn’t really like the rest.

I’m pretty sure all 4 of the Brigade have thought about that final 4 deterioration scenario lonnnng ago. Give them some credit. I think that if Rachel and Brendan are still around in late-mid game, that all 4 of the Brigade will consider switching sides. But to make that movie this early would be dumb. They’ll wait til mid game is over, and then pick a section of the house that the Brigade hasn’t touched much, or has failed to evict, and then be a secret backstab vote to turn the tides from 3v3(assuming one of the 4 gets evicted by then) and then it becomes 4v2 AGAINST the brigade.

I’m not dumb enough to give them credit. That is idiotic. You have a gook, meathead, a “self-proclaimed” genius and a jock. There isn’t anyone in there except Matt that may be all that bright. so please, don’t be a dumbshit and think they really have thought this out long before.

I already confirmed it was true. They are related. Enough said.

Hey QAZ, Where was that CONFIRMED
Thanks

Are you saying that Brenden is Gay?

Mr. Me Too
Reply to  Nancy

not really but he has a lot of “feminine” tendencies

Rockstar
Reply to  Mr. Me Too

he’s metrosexual. He is not gay. He has bad taste in women.

LOL they allow them to come in Dr drunk?? they don;t show this on TV do they?

Read on the Big Brother Facebook page that the evicted houseguests are sequestered in a safe house and one will be voted back into the house.
Simon and/or Dawg, have you heard anything about this?

so what if rachel has no panties on. I would tap that all day long.

probably not. Once, maybe twice but certainly not all day long. Girls get bored

she had a thong on , but still her naked ass was on his bed

We need some excitement we need Brendon GONE. He’s such a Kitty.

Rachel is just gullible and for a smart broad has no common sense. Brendon is sooooooooooooooooo using her.

We need brendon to stay. I want to see him fight.

O-K, I,m not being mean about this, I promise ya,ll ! I just don’t know how to go about it to explain it, let a lone to myself. { Nothing to to with a good or bad gay person } god know’s he love’s us all. BUT, if Brandon was ” gay ” wouldn’t you think RAGAN would pick up on it right away ? I love all people, I do, black or white , gay or stright,. I was raised to learn God loves all. And God forbid one day you really needed a part of another person’s body to stay alive & that person was gay , black , white, green or red, & that person was a perfect match to you, “”” would you pass it up because of being different,? What would you do if it was your “Child ” I love everybody, that’s the nurse in me. Buttttt, the way Rachel treats her own body is ” WAY Different “, that’s just plain a sick brinning-up & no respect for herself & other’s who have to look @ her. Now ya,all have a good day & stay in the air & out of this heat. God Bless !

Damn i feel sorry the day B&R get tossed out
the house, u guys are gonna nothing to talk about.
Get the hate out ya blood people

Rachel’s ok…I think other women are jealous of Her…HATE Brittany, talk about annoying…Brendan is cool,hope He wins the whole thing! This Brigade thing won’t last, They’ll all be knocking each other off-just wait…