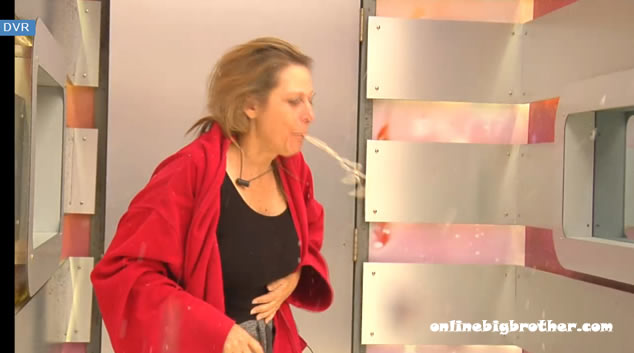 Here we go, folks, Thanks to Big Brother Canada 5 runner-up Karen Singbeil we have some “SUPERSIZED” news for this upcoming season 8  starting next month. In case you forget about Karen she was the season 5 houseguest that hated Kevin Martin more than I did. She also puked in the smoke pit for which I give her 2 thumbs up and a bottle of Kraken.

According to Actra Toronto, the 8th Season of BBCAN runs from March 4th to May 21st. (Please NOTE As Peter Brown BBCAN1 pointed out This is premiere to finale. The houseguests enter the house up to 1 week prior – source)  A whopping 78 days! (11 weeks 1 day) Blowing away the previous duration champ season 4 by… 1 day?

Actra TO has #bbcan8 dates released … that is how I knew how long our season was going to be ? but I’m still a witch ?? pic.twitter.com/BkYBQ9Qh0g

What is Actra Toronto?

And what do they have to do with Big Brother Canada?

ACTRA Toronto is the largest branch of ACTRA (the Alliance of Canadian Cinema, Television and Radio Artists), the union representing performers in the film, radio, television and new media industries.

ACTRA negotiates contracts on behalf of its members with producers and engagers. Our contracts determine minimum standards of pay and working conditions under which performers can be engaged in a diverse industry which includes independent film production, commercials, radio and television drama, telephony, video games and web-based content.

I lean more on the side of short seasons with a smaller cast and fewer twists. Like the good old days.

Guy From Canada
Reply to  Simon

Looking forward to your blog this year, not much time to watch feeds due to family.

Apparently Twistos didn’t see the market viability of my suggestion, so no Kraken flavored Twistos even though all the twists are sort of kraken flavored anyway. :(

Are you a Big Brother Canada superfan? Want to get involved in this season? We are currently casting for an opportunity to be included in a brand new social series on Twitter featuring compelling moments of fans watching the show. We are asking Canadians to send us a short video explaining what makes them the ultimate superfan. Tell us about the houseguest that affected you the most, your favourite moment in Big Brother Canada history, the competition that changed everything, what you’re excited to see this season – we want to hear it! Give us your hot takes, your strategy hacks, and your BBCAN crushes – the bigger the reaction the better. Reply to this email with a short video/post, along with your Twitter handle, and show us your love for Big Brother Canada.

Please fill out the form in the link below, which requires you to submit a recent photo and upload a video.

From what I gather, taped move in day is Feb. 29, with a one hour ET cast reveal and house tour on Mar. 1.
I think this is the first time I can remember cast reveal technically happening after they’ve actually moved in.

First impression: Advance photos of the house environment
HOH: baby blue and pink. similar looking design to the late 70’s original Superman movie fortress of solitude designs (crystal ice shard feel).
Bathroom: shards of broken mirror design on walls with purple. harsh lighting reflecting off floor. Looks like what i imagine a seizure feels like. The floor will stop reflecting the light so much once the house guests fail to sweep the floor for a couple of days, so that’s good.
The indoor backyard: they aren’t even trying to make it feel outdoor anymore (plus or minus on that given the astroturf fooled no one). faux marble tile as far as the eye can see. Looks like the type that get very slippery with any introduction of moisture. expect at least one slip and fall. has a mid 90’s restaurant decor color theme (tuscan / santa fe tones) from the look of it. The hallway to the hot tub area (i think) is an imersonation of a back alley with street lights and grafitti. Heavy door, no glass windows. pull handle door not knob so that they can continue the tradition of spying from the hall on hot tub conversations.
Diary room : cityscape with a purple half circle and thin padded seat. Expect at least one dummkopf to try to hang on the overhang arc of the half circle over the seat, and some form of destruction to ensue.
No idea about the common bedrooms yet, or kitchen.
One of the lounge areas (has very bright pencil crayons on the wall motif) another lounge are has rusty and mustard tones with orange screens.
In total: It’s like there are a few competing ideas on the general overall concept.

Corus has announced this year’s sponsor list. Expedia will be adding a dream trip for two to the grand prize. Skip the dishes is being promoted as being involved with a viewer vote to give a have not a treat which may include summer fresh? kraft dinner will be doing a similar promotion and a special “cheese” theme comp. OLG will be sponsoring a special lottery takeover week. First choice haircutters is another new sponsor, so everyone will be saying thank you for the haircut while wearing skechers (but only in the hoh room, and only for the week they won hoh, before they have to return them). Wendy’s is a return sponsor as well, so we’ll lose feeds for about two hours while they eat wendy’s before noms. So, now if they have a 21 hour non explained feed cut like back in season 6, you know which sponsors to threaten to boycott in your complaint notes and tweets to the network. You’re welcome.

cast sneak peek. There is a vote to keep one houseguest safe week one. vote ends on the 29th (the day they move in). so a blind vote gives immunity week one. and lowest vote getters are in danger.
I don’t like that idea. blind votes pre-feeds annoy me.
general cast impression: a really really diluted colours of benetton ad. The promo videos won’t actually tell us anything other than what character role the production team wants us to associate with each one. That said: first impressions of who will be annoying? susanne, jamar and madeline will be annoying on feeds due to their vocal tones. They’ll be the ones you’ll wish the volume would equalize for (they are either get too loud or hush tone all in the same conversation).
There seems to be a high concentration of bc and gta representation this season. I’m pegging the average age around 28. the oldest are 44 and 33. the youngest is 22. The “superfan” of the season has watched the seasons over and over… no word if she ever watched a feed. You know what that means.