10:35pm Ragan, Matt, Hayden and Matt The brigade waiting for Ragan to leave.. .. production calls Ragan into the DR.. Thank you DR. Matt rehashes the conversation he had yesterday with Ragan, he was asking Matt what he should do if he won HOH next week. Matt tells hayden that he doesn’t think they are on Ragan’s radar. Lane brings up the talk they had with kathy in the backyard, “Brendon told Kathy straight up fo Andrew to stay..” Matt: “yeah I heard about that from Rachel” Matt Thinks brendon is still on this kick to get out the week players first.. he calls bullshit on Brendon’s reasoning. Lane brings up that Kahty is certain that Andrew and Brendon are working together. He adds that B/R are worried about Kathy because they can’t control her vote and they can control Andrew. Matt says he’s happy with whatever they do they just need to make a decision.. “Every choice they make will be wrong”. Lane “we’re going to get shot with guns which ones are we going to get shot by”. Matt asks if kristen knows ahything becuase she so close to


andrew, hayden says she doesn’t know any more than what he’s said but he’ll see if they can learn more. They both agree that Andrew tells people whatever they want to know. Lane brings up Andrew jumping up and down after rachel won HOH.. “theres something going on between them ” Lane adds kathy told them that Rachel is trying to get info from the girls and brendon is trying to get info from the guys… Hayden: “I remember week one brendon telling me Dude i got andrew.. but that was just week one”.. Lane: “if i go off this morning instinct I would say lets keep kathy”.. hayden agrees he wants to keep kathy. Matt is always “Playing devils Advocate” points out that Kathy is now playing the game and she’s fighting and andrew is doing shit… still though Matt thinks Andrew might be a better choice but he’s very undecided. Matt keeps saying he doesn’t care but its obvious that he wants to Keep Andrew. Brit comes in.. They joke around for a bit then ask Her where her head is at on the votes this week. Brit thinks Andrew should go they should try and take kathy as far as they can cause she’s pretty pathetic in Competitions. 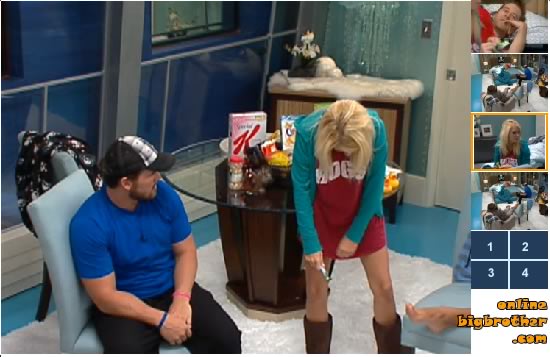 nooooo we must keep andrew in this house….he even provides good DR stuff for cbs…AXE KATHY.

matt…regan…brenden..rachel will keep andrew….sadly the rest will go the other way, I am bummed…all because hes aligned with r and b? please…they dont even know that, and matt is right, keep him as a target, dont bring kathy who WILL make final 4 if she lasts another week, and that will suck for EVERYONE not named kathy

From what I have been hearing, this season has been so boring that they have to use footage from previous weeks just to get something to televise. A lot of people caught on during last night’s broadcasts. For example, Lane and Britney’s schtick was filmed before Monet’s eviction. Christ, by the end of the season they have think “Chicken George has beenrecast thisseason – and is the saboteur. AG, you, like all greedy studio execs, have taken what was once a great sumer replacement for reruns, and ruined it. You’ve made it into something isn’t by repeatly overdoing what worked in the past. No, the show isn’t formulaic. No, showmance are not the spotlight of the show. No, we are not stupid. I know there’s more. but hopefully I hit the main points. So instead of a game show we are forced to watch an over-extended version of “Blind Date” AG do you really think we want to watch those two douchebags “bumping ugly” or is it that you (deservingly) shot yourself in both feet. Bullet One: The Sappy -Tour. Bullet Two: Playing up the love affair between a Closeted GAyboy and the Trannie Who Can’t Say No!”

Correction: The popularity of this show is not based on a formula. It is based on the chemistry between the HG and in turn how we response to their interactions. This year you thought literally, by casting two chemists and expects us to response to their body fluids. Now take that ringing phone on your desk (Yes, it’s Mooves) and either beat yourself to death with it or string yourself up with its extension cord. Ilsa: She-Bitch of the SS!!!

Could not have said this any better!

if andrew goes home i honestly am going to stop watching. he’s the only person in the house with any strategy and the only one that gives the audience something to root for. Im not a fan of brendon or Rachel but if they can get the votes together for him to stay, than fine. the brigade is so annoying. lane and hayden are fine, but matt and enzo are unbearable. CBS we know u rig the game, and if ur reading this, rig it so andrew stays. kathy is pathetic. smoking as she sobs over her health issues, and i thought she WASN’T gona throw andrew under the bus? she needs to go. Iv been a fan since season 4 and Andrew leaving the house and Kathy staying, along with matt and enzo, thats enough for me to call it quits.

Awesome! The first threat of “I’m going to stop watching” so far this season!

What strategy does Andrew have. That so called I’m going after B/R scene was a complete joke. He has the character of a bucket of rocks. The so brigade is also a joke. I will vomit if I have to watch Mutt and Jeff (B?R) role in the hay for much longer. CBS you really flopped on this cast!

I said it earlier this morning but I was joking.

I don’t know about you guys, but this year has been really ho-hum BORING. I thought it was just me at first, but I really can’t get into it. CBS better come up with some good “expect the unexpected” or I may just check out and check back in next year. I have nobody that I truly want to win….and I ALWAYS have a favorite or two in the house. And when it comes back next year, it better be an All Stars season because that is about the only thing that can redeem BB after this year!!!! Just my opinion….and I’m just wondering how everyone else feels.

I agree. Yawnfest & it’s time for an ALL Stars season! The boards are more interesting than the actual show.

Rachel is supposed to be in school and so very smart and yet her grammar is atrocious…almost as bad as Brendon’s. Each may have had a better chance of winning without each other but no way now…plus the rest of us are so BORED watching them and hearing them. Stop the whining and judging others while you play dirty yourselves. Cannot believe they called out Matt when they are two sneaks.