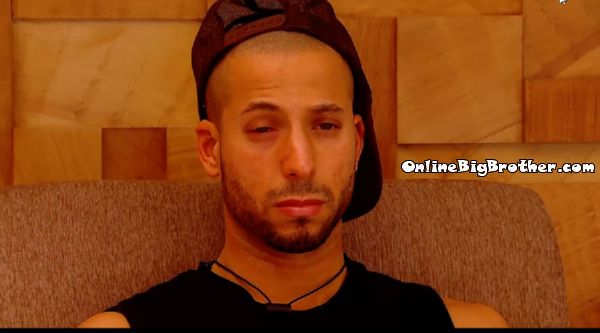 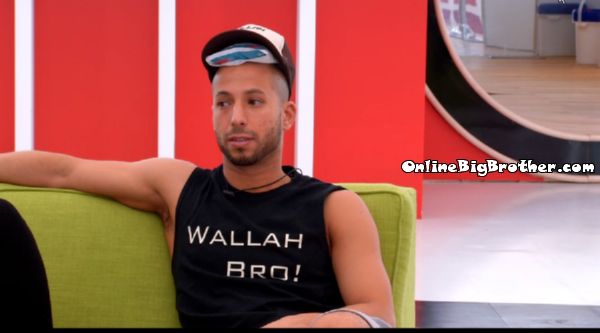 Adel has put an ice bag under his hat to help him stay awake. They start playing a game where they each say one attribute they like about the people left in the house. Adel has difficulty making sense. Neda asks him if the cold back is helping. Adel – “I think so that or makes me more nuts”

What Adel thinks of the other houseguests
Adel likes HEather’s teeth, a$$ and whole face
Adel to Neda – “I like your hairy body keeps me warm at night” (Neda laughs says keeps you warm in the winter”
Adel says he likes NEda’s look
Adel says he likes Jon’s one big tooth. “It’s so beautiful.. I just want to suck on that thing”
Adel likes Sabrina’s crazyness.. “Ya you’re a wacko”

What Neda thinks of the other houseguests
Neda says she likes Heather’s lips, Sabrina’s eyebrows and Adel’s nose.
Jon can make people laugh at any situation.
Sabrina is bubbly.
Heather is really sweet, likes her butt and her lips
Neda – “Adel is the fuckest weirdest hilarious person she’s ever met ever.”

What Jon thinks of the other houseguests
He likes Neda’s eyes and forehead.
Adel is funny
Jon says Heather is a good actress
Jon points at Sabrina “You’ve been a thorn in my side” he changes it says Sabrina is very kind hearted

What Sabrina thinks of the other houseguests
Sabrina says Neda is smart and Wise, “It’s the same thing in a way” (nope)
Sabrina says she likes Neda’s Smile, Heather’s a$$

What Heather thinks of the other houseguests
Heather says she likes the big Heart Jon has. She loves a lot of things about Sabrina , “How forgiving you are.. I like the forgiving apart of your personality”
Heather loves Sabrina’s Hair JOn’s eyes, Neda’s body and Adel’s smile

Adel says when he finally falls asleep after 36 hours he doesn’t want Sabrina taking advantage of him. 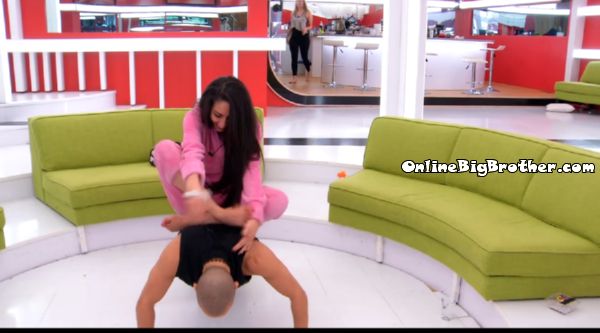 Adel tries a pushup with Neda on his back. she pees on him “It’s just a drop”

Jon finally gets into the Head of Household room. He’s been joking around that they are setting up Pandora’s box. He comes out after searching it, “Theres no Pandora”

JOn heads outside to check out the hot tub room it’s locked, “Hey guys Pandora is outside the door is locked” 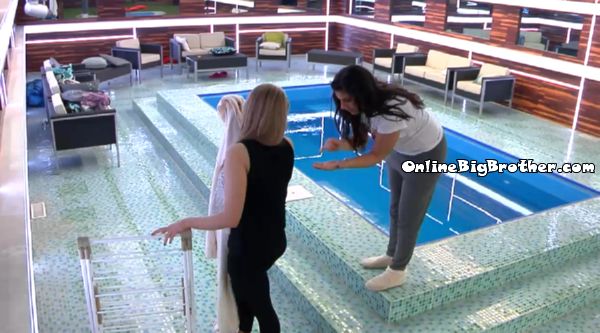 7:44pm Poolside Heather and Sabrina
Sabrina figures out it’s the laundry soap that is causing her rash.

Neda talking about the problems that “Persia” (Iran) is facing with the divide between the youth and the religious government. Brings up the protests and how the government shoots down the protester. 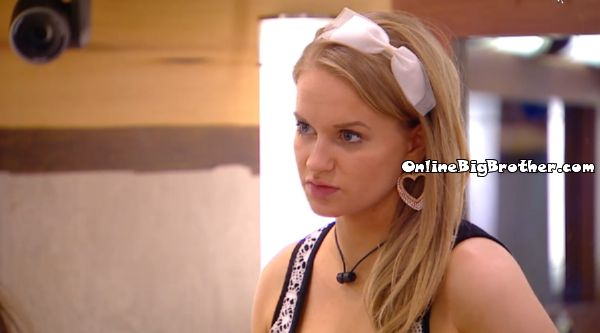 Here we go again – someone asked about it a while back and got attacked. Why does Neda or even Talla for that matter say “In Persia….” There is no Persia as far as I know. I believe it’s called Iran, right? Why do they insist on calling it that?

just an opinion
Reply to  WTFISUP

Because that is what it used to be called. I am guessing the family and their history identify more with name Persian than the name Iran.

imo, it is a political statement, to say that tho they are from that country, they left it under protest or duress, and that they consider the ruling faction to be there without the will of the people, etc. Iran and Persia are the same place, but Persians may be making a statement by calling themselves Persian, not Iranian.

Persian is an ethnic group, it’s an area, and it’s of no consequence to me or the game.
If you wiki it instead of asking BB fans, you might get a clearer answer.

For the same reason that the English will say “In Britain”, culture and tradition.

Iran is the legal name of the country. Persia was an ancient Kingdom within what is now Iran. Calling all of Iran “Persia” is like calling all of Great Britain “England”. Persia is a territory within Iran but both names are use interchangeably. Also, a lot of people call the United States of America just “America” or the “States” but we all know what country is being referred to, right?

Who cares! If someone asks me where I’m from, I say ‘Holland’. Holland is actually two provinces (north and south) in the country called The Netherlands.

Jon should really push Neda or Heather to vote out Sabrina, if one of them vote out Sabs, then he can break the tie and make the choice to keep Adel for himself. Jon is blind and cant see that Neda is playing for herself and he is playing her game for her. WAKE UP JON.

Jon is playing a masterful game. He has had one of the best social games in the house from week 1 and has made the right moves with both HOH’s and POVs. To win BB you have to be as open to accepting other peoples ideas for game-play as well as contributing your own great strategy thoughts and Jon has accomplished this repeatedly. It is not a sign of weakness that he respects Neda’s strategic ideas. It follows, that staying close to Neda, and being a kind, respectful, and friendly houseguest has kept Jon off the block for the entire game. When you are not HOH it’s your social game that keeps you off the block which is the 2nd most important goal when playing Big Brother. Let’s not forget Jon winning that POV kept Canada’s nominations the same and well.. we all agree that week was a game-changer. We made those nominations but Jon protected them. Re: Arlie’s eviction I don’t see how Neda is taking sole credit for getting Arlie out of the house. I think Neda gave Jon the idea but Jon executed the plan and if Allison had used her POV correctly on Arlie and not Sabrina the entire scheme would have blown up in their faces and Jon’s HOH would have been viewed as a disaster. Why am I saying this?, Jon has said ‘I almost swung and missed’ and Arlie has said “You took the swing too early’ So I feel Jon had a EQUAL right to claim an Arlie’s eviction on his BB resume as does Neda. As for this week, Jon had to win HOH otherwise he would have surely been on the block and most likely going home. Also, I don’t think it mattered who Jon put up for eviction this week, he was the #1 target for this eviction and will be the #1 target for the next eviction. Furthermore, it does not matter to Jon who wins HOH next because he must win POV and he has said so himself for the past 2 weeks.

Exactly! Neda has herself in a good position with both the girls. Jon on the other hand will be screwed. He knows it, he’s said it – yet he allows Neda to control his HOH. You will be right behind Adel if he is the one leaving on Thursday – for sure buddy.

Keep Sabrina, Keep Adel……you never know what is really the best choice. They are both no good at comps, Adel is a bit better than Sabs. But Sabs is very good at dates and getting people to believe her even though in the same breath, she says she’s lying. Neither choice is a good choice for either Jon or Neda. Everything comes down to how Neda plays for the HOH and how they both play for the veto. That’s all that matters.

I will say it again. Neda is nasty. yuck.

Once Sobrina learns from Heather that “Neda will vote to keep Adel and that Jon will break the tie”, S will spill the beans about Jon’s earlier promise about Joneda’s previous plan to blindside H.
Result: the sloppy seconds will make F4 and the facade will vanish: everybody is looking to get the big prize!
For the next HOH, Jon is at a disadvantage: if N or H wins, they will put him and Adel up.
So A or J need POV to save their skin.

That being said, observed on the feeds that Adel is trying to open the secret door where Allison found the red veto.
Something is going on with BB interfering in the game, right?

I hope the fu#$ès jon good!—-he could of made them support keeping adel!–cant wait till the girls get rid of him!

Keeping Adel up for 36 hours is ridiculous! Should have been 24 max. I hope he’s saved this week after going through this torture.

Ummm….no one made Adel choose to do this. He said YES!!! Feel sorry for him….hell no! He had a choice. He’s been a disgusting human being for the past few weeks. And as per his religion, he is very disrespectful to women and hold them below him and in utter disregard. Shame on him. He is starting to be equal to Sabrina in this seasons most horrible HGs

Ummm….no one made Adel choose to do this. He said YES!!! Feel sorry for him….hell no! He had a choice. He’s been a disgusting human being for the past few weeks. And as per his religion, he is very disrespectful to women and hold them below him and in utter disregard. Shame on him. He is starting to be equal to Sabrina in this seasons most horrible HGs

Over 40 hours, but I’ve done it. It’s not that bad for me. Has no one here gotten up at 9am and then went to sleep at 11pm the following day? That’s about 38 hrs, but I’ve done that several times. Sometimes sleep just gets in the way of meeting deadlines.

I find that the older I get, the more sleep deprivation affects me.

P.S. I hope you’re not driving during these 40-hour waking marathons. Lack of sleep is apparently just as damaging as drunkenness when it comes to driving.

Really, is that what your favorite TV anchorman says? You have a very promising future as a parrot.

lets face it, Adel never thought of going pre-med and becoming a doctor. many interns normally do 36 hour stints!

Which is really terrifying. Yes, please operate on me when you’re sleep deprived–that sounds like a great plan.

Neda…keep your eye on the prize!!! Vote out Adel! Jon has to win POV next week no matter what…everyone will be gunning for him first! ….evel Adel! Adel is a snake… Jon will stay loyal to you no matter what…he has no choice! Neda also needs Jon in F3 for competitions as well…so I don’t understand why everyone is saying it will be sooner! IF she did cut him loose…she would only do it for F2 (if she had the choice). The ideal spot for Neda is to be in a F3 where both would take her… I.e. Jon and Heather. Neda is the BEST game player so far and deserves to win…

Just a question about Heather – other than being a physical threat, how do you feel about her social game?

Yeah, while I’m not rooting for Adel to win, I do feel bad for the guy. Sleep deprivation can be brutal. I really think they should give them sillier punishments. It’s not particularly entertaining to watch a guy stay awake for 36 hours. Seriously–who came up with that as a punishment?

I find that BBcanada is overly cruel with the houseguests.

Neda’s loyalty lies with her mom who needs a house. Heather knows they all wanted her out this week and s She has seen Jeda”s loyalty with Alison. She is playing an emotional game now with hurt feelings. Think Adel would be better for her game, because he would go after Sabs next, who I think would beat Heather in final two. I once stayed up for 41 hours. It was a crazy experience. Your body fails you but your mind actually stays very clear.