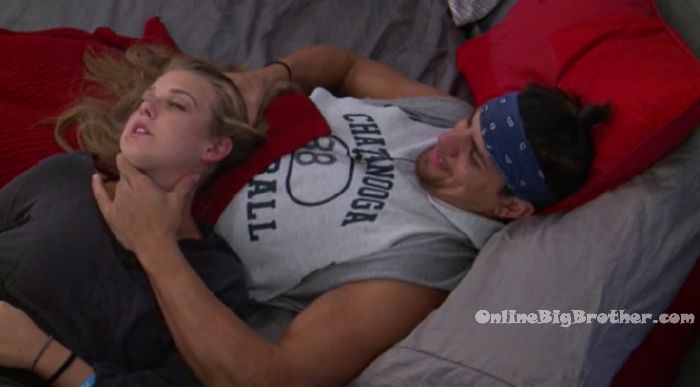 ******* UPDATED *******
8:05pm HOH Room. Fes and Haleigh. Haleigh – what face mask do you have on? Fes – what? You left it up here for 3 days! Haleigh – No you did not! You suck! Fes – what is it supposed to do? Haleigh – make your face look revived and soft. Fes – feels like I have a wet paper towel on my face. You look like a s#xy power ranger. Haleigh has a shower and then joins Fes on the bed. Haleigh – I am so mad you found mine. Fes – me too! Haleigh – so now what? Fes – Tyler came up here. I could put him up and he wouldn’t go home. I am working a deal with him and Angela for you and me. 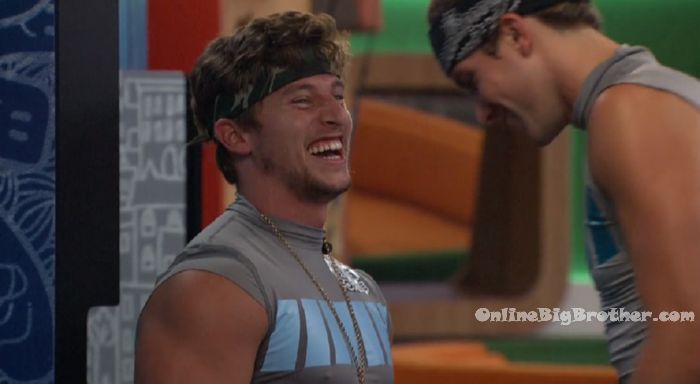 5:50pm Bedroom. Tyler asks Brett if he was the one that took all the mattresses? Brett – yeah and all the cushions. Kaycee – so Brett you took all the mattresses and put it in there? Brett – I made a barricade. I literally didn’t even look for any. I just kept barricading mine. Let those idiots look go look for them. I just going to protect what’s mine. (Smart strategy) Haleigh – I am so mad Brett. I literally went to your spot 4 times! That’s such a good idea Brett. You suck! 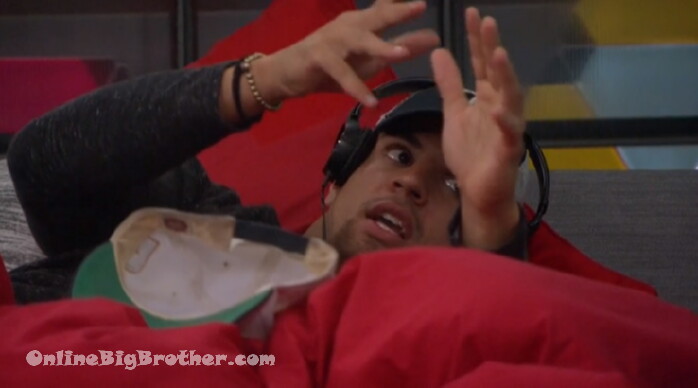 Fes – I’m making a move so I want it to pay back next week
Tyler – oh for sure
Fes – if noms stay the same another question mark is going to have to go next week that’s all i’m saying popel can’t keep.. this is the big thing I have with you Peple just can’t skating by and not doing anything and make it to top four and all of a sudden they win one comp and they are sitting on final 2 getting a chance
T – and they are knocking out the people that have been doing sh1t the whole time
Fes – yeah that’s what I’m saying.. even though .. same thing with Angela when she was HOH she could have put me up because we don’t talk game and we’re on the opposite sides of the house
Fess told her his comp is coming and when he wins it if she doesn’t put him up he’ll return the favour. “I always return the favour.. I don’t know how to be shady like that”
Tyler says Angela never brought it up to him that Fes was a target.
Tyler mentions that he told JC if Fes gets nominated there’s not a chance he would vote Fes out “Rockstar needs to go”
Fes wants to build something ‘Move going forward”