Up in the HOH room Rachel and Brendon are talking about how much they trust Britney now. They laugh about how they need to come up with an alliance name for them like Two Girls and A Guy Named Brendon. Rachel tells Brendon that she trusts Hayden way more than she trusts Matt. 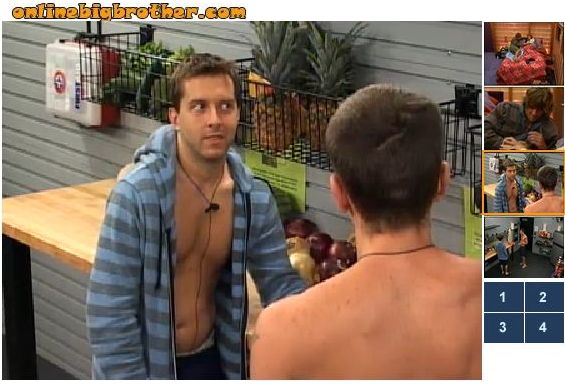 1pm In the storage room Matt is talking to Ragan about how they don’t believe Britney’s explanation of using the POV or not. Ragan thinks the original deal was to put up Kathy and that Britney changed her mind when she found out Rachel would have put up Lane.

2:25pm Brendon Bashing Brit, Ragan, Matt, Lane Brit telling them a mad up story about Brendon having a partner that wears the same thong while stripping. They all start to share stories about times they were trapped having to talk to Brendon. Ragan mentions having to listen to why Brendon doesn’t like kobe Bryant but loves the NBA. Lane tells a story about Brendon getting into UCLA because he was able to befriend a professor. The professor offered him into the school and a 6g scholarship but Brendon had to turn it down because of BB. They keep compalining how Brendon just goes on and one about things it hurts their heads. They make a joke about Brendon saying he could out swim phelps but didn’t want to wanted to go on BB.

Would be interesting but I don’t think it will happen. The guys aren’t going to turn on one another just yet. If there were, I think they might have on Matt.

Yes, but you’re not looking at 2 facts: 1. K wants to stay and will fight too. 2. with H on the block only 3 brigades are voting. The vote will be 3 to 4. I believe K. can get the 4 from Brit, Ragan, Brendan, and Kathy. I think Brit and Ragan and Kathy will go along with it, because like they said before they want to keep their hands clean, and will rely on Kristen to win HOH and put up B/R. They will have to lie to B/R to get Brendans vote. Or if Ragan is as slick as Matt he can have Matt vote and let the house think it was Brendan. Then Hayden will be gone.

Interesting. But I don’t see Brendon going against Rachel. Ragan and Britney are staying away from anything that might upset Rachel. Kathy will vote to keep Kristen. Kristen will be going home. Now we will have to wait to see if anyone has the balls to challenge R&B.

It would take a ton of lying to get Brendon to vote for Kristen to stay because Rachel really wants her out.

true, but if R gets wind of the fact that lane, enzo or hayden for that matter wants her out, hayden will be gone so fast his head will spin. Things change everyday in that house. i wouldn’t put it past Kristen to be the one that spills it.

Yeah, but since the house doesn’t know what they want Kristen will be going home this week.

Dawg !!!! Geez, you give us all the great posts, you put up all these revealing pics of the girls. And, you give us one pic of Lane in the water ….and he looks like a midget!!!!! come on, get us one of Enzo or Lane we can really appreciate 🙂

I am watching Lane, Enzo and Brit, and she is asking when is it that they plan to backdoor Matt. They answered in 2 or three weeks. Did I miss them making a pact? Are they just stringing her along? I hope its true and the three of them get rid of Matt! What did I miss?

They are stringing her along.

Do you know this for sure? I wish it was true! I could really get behind Brit, Enzo and Lane as a power alliance. Matt and Hayden both put their own interests before the brigade. If they save Kristen, they would have a good four person alliance. I’d love to see Matt get backdoored by the bros.

Oh god! They are talking about K and H being brother and sister. They don’t know that it’s gone way past brotherly pecks on the cheek, but it’s still creepy to listen to. I’m sure BB would have stopped them if they really were related. I hope. Yuck.

Julie said this???? I thought it was a lie that Annie made up. Now they are saying there is a relationship? Are you sure?

You’re right, my bad. I just listened to it again on youtube, and it said two of you are life long friends and if you think about you will figure it out. So I don’t know if H and K are the lifelong friends that just found each other again, but I thought it might be Matt and Ragan, because they are so close, I think Ragan is the only one in the house Matt won’t turn on. He tells Ragan everything, and it’s the truth, but he lies to the brigade whom he says he is in an alliance with.

No way you are bad! You keep checking things out and let me know. I count on you for info!

they wouldn’t know, do they get all info from people ???

Yes they get quite a lot of information from you when you tryout. I guess strange things could happen but I would be very surprised. It has happened that information has come in right before airing and they have had to change houseguests. That is why they have a few backup contestants.

It would be nice if one season they add in a couple of back ups like maybe 3 or 4 in the middle of the game to through the original house guests off their game. I bet it will be like Survivor when the tribes join together. Even though they had alliances before, once the new ones come in the house the old ones will ban together to get the new ones out. All kinds of alliance might be broken then.

Can they also know some of the things that have been lied about?

Are Britney’s tits real?? those things are huge.
She’s so gorgeous. mmmm…

i would love to see Kristen stay just to win HOH if she could and put up B/R………….Maybe Mama Kathy will do it! LOL

I don’t know about y’all but I used to despise Britney but now she is cracking me up…especially her little contest with Lane about trapping each other in a boring conversation with Brendon. This girl is gooooood too; regardless if she is a two-faced bitch, she is playing her cards right and winning POVs. I almost want her to take the house but I am loyal to Team Brigade yo. Is Brit a mini-Brigade? Did they make a side deal with her? Sorry but Rachel is still a complete dumb ass. Good Lord my IQ drops every time that ignorant bitch opens her mouth. To the Brenchel fans: just my opinion so please don’t commit murder by blog!
P.S. Goodbye Kristen 🙁

I will agree with you on that. I hated the way Britney was attacking people on a personal level (has nothing to do with the game) and knowing that family and friends have to hear this. But, she is pretty funny and makes me laugh with her DR sessions.

don’t worry they will, opinions on favorites and non favorites don’t matter anymore im afraid…. if your not a Brenchel Druid they reply with venom

The Excitement
Reply to  haydenandkristenfan

Britney, Enzo, and Ragan are the 3 most entertaining HouseGuests. Rachel is just a trainwreck.

UGH! As much as I don’t like Rachel, I also don’t like Kristen. During their fight, she’s screaming “so you’ve won 2 out of 4 HOH’s, that’s no big deal”. I wanted Rachel to look at her so bad and say “actually I’ve won 2 out of 3 HOH’s b/c I didn’t get to play in one of them or I would’ve won it too, and that’s 2 more than you”. Poor Hayden and Brendon are standing back there being brought down too by their big mouths. Then when Rachel does apologize (and I know it wasn’t a sincere apology) she’s all “I don’t accept your apology”….UM HELLO!! I don’t care how much you hate her, you gotta butt kiss b/c she’s HOH! So I’m happy to say: BUH-BYE KRISTEN!!!

Excitement, you live up to your name!

I forgot Ragan was in the house

so brit didnt use the pov?