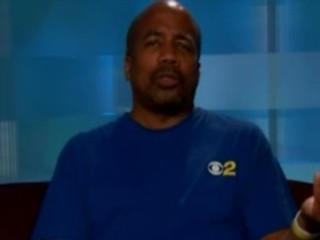 Any good reality show cast has the angry black person, the crazy nut, the compulsive liar, the hottie, the girl who looks awesome in a bikini, the gay guy, the whiner, the nerd, and the old guy everyone tries to avoid.

The good news: I got to spend twelve hours in the “Big Brother” house with 9 other journalists/bloggers for “BB’s” annual media day!

The bad news: half way through the exercise, I realized I was ALL those people.

OK, maybe not the hottie.

Or the girl who looked awesome in the bikini. And maybe (hopefully) not even the nerd!

But still, I had the other roles handled. Maybe too well handled.

On the plus side, I wasn’t evicted, or put on slop (and yes, it tastes worse than you’ve heard). And I wasn’t backstabbed.

I came in with no strategy — just enjoy being locked up in the house for 12 hours, to experience just what a real houseguest goes through, I told myself. Food competitions, the Head of Household challenge, evictions, diary room, the Power of Veto competiton. Slop!

Hopefully, even a bromance. (Hey, we had to kill 12 hours! And some of the boys were cute.)

Truth be told, my REAL interest was in seeing, up close, the “BB” house I’ve enjoyed seeing on TV for 11 seasons. I’d been in the back yard a bunch of times (to interview houseguests for the finales) but never inside.

This season, the house has a beach-Florida-flamingos-palm trees-tropical-fish-cabana-feel. Some thought the house conjured up “Golden Girls”…maybe that’s why I was constantly channeling my inner Sophia. I said whatever came to my mind.

I just felt really cool — and maybe a little too relaxed — walking around in the house…standing where Evil Dick dumped iced tea on Jenn’s head in season 8. It hit me. He won $500,000 being a complete weasel…perhaps I should employ that strategy. Make them hate you, but love you!

Twelve hours sometimes felt like an eternity. It was fun, but weeks? Three months in the house as the show’s real winner would have to endure?

I can’t imagine three months in the house — no privacy, no magazines, no TV, no books, radio, no news from the outside world. People watching your EVERY move, including showering and…well, you know the rest. (Complete props to my friend/co-worker cbs2.com Web producer Diane Henry who was, before joining us, on “BB5” and “All-Stars” for weeks. Twelve hours made me a little nutso…admittedly. And she did…weeks! Mad props.)

So, I’m in it for the fun. And the experience. But then the producers announced to us that there was a $500 prize at stake for the player who played the best game, as voted on by his/her fellow cast mates. $500?

The idea of winning $500 made me a LOT nutso. I need new tires, hello!

Seriously, the box of Krispy Kremes they put out was enough for me! For $500…it was time … to… strategize.

That’s where Alan “The Complete Suck-up” Carter reared his very ugly head. I should have been nicknamed Hoover I did so much sucking up. I annoyed everyone telling them how funny, smart, hot, enjoyable, talented, bright and nice they were.

I even annoyed…myself! But I couldn’t stop.

After announcing to my fellow housemates that “I’ll do pretty much anything to win the $500”, they gave me some nicknames — I find out later.

Many of my house guests took my innocent — “I’ll do anything!” comment to a BLANK extreme. In fact, my two nicknames…can’t be repeated on this family friendly Web site. But one rhymes with “door” — the other “looker.” (No one said my fellow journalists were all in this to make friends. Brian Gianelli from Fancast…Matthew Whitfield from Yahoo…both super nice guys. But, again, $500 is at stake. And can …I… trust them? )

It wasn’t my only slip of the tongue during the day. Over the course of 12 hours, with strangers, one is likely to put his or her foot in their mouths. A lot.

Reminder for the future: when meeting strangers stay away from discussing age, sex, jobs and relationships. I’m trying to bond with Derrik Lang, from the Associated Press, after Andrea Reiher from Zap2it revealed to him that I hated his green sneakers (Thanks, Andrea!).

I say “trying to bond.” I tell Derrik that “my good friend Jeff Weingrad also works at AP…you must know him.”

Actually, says, Derik, “your good friend hasn’t worked there for about three years.” 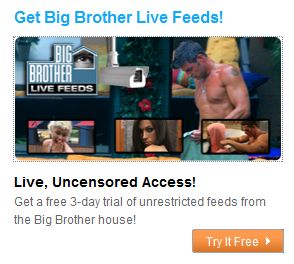 I made a bunch of other dumb blunders. Some too humiliating to remember, or repeat. But calling four house guests in for dinner, four times, when they are on slop was a strategic blunder…but I wasn’t being malicious. Or trying to rub it in. I was … tired! Stoopid!

The Head of Household competition was won by my so-called bud Reagan Alexander of People.com (yeah, he’s straight, but he was my intended “bromance” and if you’re going to suck up to someone, the hot HOH is the way to go.)

We had to explain to Reagan why we shouldn’t be put on Slop for the day. My excuse — that I’m diabetic (true) seemed to work (although no one seemed to notice I had literally just polished off a jelly donut before making this pronouncement. Oh, and a half a chocolate chip muffin.) Telling Reagan he was hot didn’t hurt. I avoided the Slop curse.

An aside, I find straight boys love when you compliment them. (Score!) Well, not literally. But I wasn’t put on slop. Job #1…a win. (Finally, no Big Mistake from me! This was a good, solid strategic move. Weird…but it worked!)

Megan Tevrizian of TV Guide Net explained that she shouldn’t be put on slop because — she was willing to wash all the dishes! Did I have to call out “But we’re using paper plates!” Really. Did I have to do that? Dumb.

Then I started asking people…if I’ve lost their vote!

The POV (Power of Veto) competition involved one teammate hurling raw eggs at the other…to spell out words. (Did the producer who came up with this idea graduate from Gitmo University?)

My first clue we were going to be subjected to something filthy and crazy was the e-mail that warned us “wear clothes you won’t mind getting dirty.”

Dirty? Two days later, after many showers, I still had egg yolk and pieces of egg shell in places you don’t wanna find egg shell. Ever! Too much egg! I lost count after the 50th or so raw egg broke in my face or hands.

I love eggs and it’s been two weeks since the competition…and I still can’t hold one. Or look at one. Or go past one in the grocery store. My teammate Matt Maynard from We Love Big Brother.com was a trooper. He actually flew in from Ohio for the day. But he got to throw the eggs. He got the glam assignment.

And even though we lost as a team, I’m thinking perhaps by now, with a little team bonding, he got over the “The boy from Ohio should be the first one we evict” joke “because the guy from Ohio always dies first in war movies.”

It was now time for the nominations for eviction. In the diary room, they asked me if I trusted Reagan. Of course I do! He’s my bro. Hello!

Uh, shouldn’t I trust him? Is there a reason I shouldn’t trust him?
They can make you very paranoid, very quickly in the BB house.

In life, if someone tells you, “You look great!” it’s a compliment. In the “BB” house…you’re convinced it’s a slam. It’s … just…how …the game…works. You mean I look great now? Or for my age? Or I didn’t look great before?! Mind games! And I come to find out, I’m not that good at them.

Come to also find out, I WAS being targeted. Didn’t see that one coming at all. I thought I could trust Reagan. But HE was in a secret alliance with Ben Mandelker from B Side Blog. All day long they’re just pretending to hate each other. They’d both competed in “BB” media day before. Aha! Backstabbed and I didn’t even see the knife coming!

Some 11th hour sucking up got me a reprieve from being nominated. Job #2 …handled. (I think I told Reagan he was hot, or something like that. And by now, he is enjoying my compliments a little too much or surely signing up for a restraining order.)

A few of us decided (OK, I decided) Derrik had to go…cause he wore green sneakers. No one said the reasons for wanting someone out had to make sense. And it seemed like a good a reason as any. Sorry, Derrik! Besides, he doesn’t know my “good friend Jeff” so…he was expendable as far as I’m concerned.

Reagan also plotted against Andrea…cause she wore a St. Louis Cardinals t-shirt and he’s a Cubs fan. (Hey, I was also on board with her eviction being a Dodgers/Mets fan myself. And she did kinda out me to the house on the “Alan hates Derrik’s green shoes thing.”)

So, OK, Andrea and Derik had to go…and I’m on board with either of them going. Although, I do believe I told Andrea she was very pretty and she had my vote to stay! See, I told you I sucked up a lot. And lied! Not pretty.

Did I win the $500? Well, no. And I still need new tires…not that I’m sucking up, but if the “BB” producers are reading this, I had a blast.

So…there’s always next year! Watch your backs, fellow journalists! And I don’t mean that in the BLANK way!

The REAL “Big Brother” (hosted by the beautiful and talented Julie Chen –and that wasn’t sucking up!) returns to CBS on July 8 (8:00-9:00 PM PT) with a twist: one houseguest has been put in the house to sabotage the others! Find one hour episodes on Sundays, Wednesdays and Thursdays), online (CBS.com, Real Networks, the CBS Audience Network and Twitter), on the phone (CBS Mobile simulcasts) and on cable (SHOWTIME to air three
hours of live feed every night).
Source: CBS2

Absolutely hilarious post! I am sorry you did not win.