11:50pm Big Brother tells Hayden & Kristen to Stop That!! Rachel and Brendon go to find out why they were told to stop doing something. It turned out that Kristen was sticking her finger in the fish tank and then tasting the water to see if it was salt or fresh. And she says that its not a salt water tank. Rachel, Matt, Hayden, Brendon, and Kristen are talking about the fish. Brendon says that he thinks the reason why all the fish are dying is because the tank is just messed up. They joke that the fish are getting evicted faster than they are. Matt asks if the salt water for the fish was just water with table salt. And Rachel says they are dying because there probably just isn’t enough oxygen in the water.

Meanwhile out in the backyard Enzo, Lane, Kathy, Monet, and Britney are all still listening and talking to Annie. Annie is going off again about how they are crazy to keep Rachel the Brendon & Rachel alliance. No one is agreeing with her or saying anything for a bit, then Lane says that he agrees with Annie. Annie says that she has three votes to stay already. Britney asks her who’s votes does she have? Annie says she won’t say but that Lane has said he would vote to keep her. Annie tells Monet to watch out for Brendon because he is coming after her, Monet doesn’t really believe her though. No one is really saying anything. It’s exactly like early everyone just sits and listens to her talk and as soon as she leaves they will all talk about how crazy and nuts she is and how they need to get rid of her. Annie then tells them that she would kiss anyone’s ass to stay, and that they could be making sweet deals. No one responds. (lol)

12:15am In the lounge room are Hayden, Kristen, Brendon and Rachel. Rachel is talking about the confrontation with Annie earlier in the night. Rachel says Annie came up to her and asked why she hates her and Rachel says she didn’t say anything to her and that the conversation lasted less than three minutes. Kristen agrees and says that after Annie went crazy. Rachel says that Annie was making up lies!! Rachel starts getting mad and says again that she didn’t do anything to Annie to start the fight. Rachel says that she really wants to think of a good speech for Thursday’s eviction. Brendon calms her down and tells Rachel to not to get all worked up. Brendon says that Annie is a very good game player. They all joke about how awkward it will be to sleep in Annie’s room now. Rachel leaves the room. Hayden talks about how he missed when Andrew blew up on Lane and when Annie had her meltdown. They all laugh. Brendon says that he’ll just sleep with Annie. Kristin says OK. Rachel goes back into the room. Matt says that it is the final two bed reversal. Matt says to Kristen that it’s nice finally to get to know her better. Rachel agrees with Matt and says she likes Kristen, that she is a really honest person. Matt laughs and jokingly says that he just wants to let her know that he’ll probably backdoor her (Kristen) next week.


12:50pm Out in the backyard on the couches Britney, Enzo, Monet, Annie and Kathy are all talking and joking around. Enzo tells Annie to keep fighting that’s it, but you don’t want to cram it down people’s throat, just little by little and if you get evicted you throw him under the bus and let them know everything. Enzo tells them that when he gets evicted he is going to go nuts. Enzo says that he is going to have to have security drag him out and that he will give Julie Chen the finger. They all laugh. Enzo tells them that he is seriously thinking about going on slop next week so that he will lose weight. Kathy tells him that she can be on his team to help lose. Everyone laughs. The talk turns to the competitions they have had so far. Matt and Lane go out to the backyard where the other houseguests are and Enzo goes inside. Rachel goes out to the backyard and says goodnight, and tells them that Ragan already fast asleep. They think that they do the early show in the morning instead of the night they get evicted. Britney asks if they will get paid for doing appearances after Big Brother ends and Matt tells her that he thinks that they do get paid. Monet gets up to go in and Enzo says they should go in but that he is afraid he will eat something because he’s a fat fuck and that he is seriously considering gong on slop next week. Enzo tells the other houseguests that the back wall should have a fence so that people could throw food at them and stuff, like a zoo. Matt and Enzo plead for America not to vote for them as America’s player and then they joke for America to vote for Lane. Enzo says that Lane had his tongue pierced but Lane says he never had it pierced. They keep accusing Lane of having his tongue pierced and finally Annie says lets see your tongue and Lane says he would never get his tongue pierced. Enzo starts talking about his shirts and then says that he puts on them and then he says that they better have a shirt he gets back that says “It’s a wrap, like chicken.” Enzo tells them that his brother is too cheap to buy feeds but will be watching them over at his wife’s for ten minutes and then leave.

1:10am In the bathroom Hayden comes in and asks Enzo what he is thinking about and he says “It’s a wrap, like chicken”, that’s what I’m thinking about …I’m going to brush my teeth because my breath stinks and then I’m going to bed. Rachel and Brendon are now in the bedroom flirting and making out under the covers. 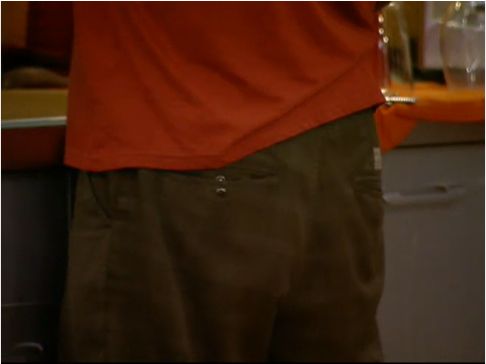 In the kitchen, Hayden is making pizza for Kristen and himself.  She is staring at his butt while he makes it.  Hayden is asking her if she minds if he touches her pizza with her fingers, she says yes.  Hayden says when come get your own pizza then.  Right then Kristen farts and both Hayden and Kristen crack up laughing… 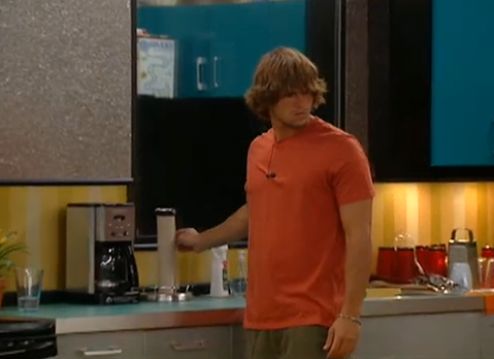 In the bedroom Enzo and Lane are talking, Enzo asks what the hell are we gonna do tomorrow?  There’s nothing to do but fight!  Enzo says he wants a raft to get the hell outta here.  Lane asks where the hell are you gonna go?!  You gonna put it in the pool and what?!  Lane says if you get HOH you should ask for a latter.  Enzo says he wants to clothes line Matt for wearing those pajammas …why would you wear those?!  Enzo and Lane joke about what girl they would want to slap and Lane says he would want to slap Ragan.

2:10am Kathy and Monet are talking in the lounge room about Annie. Kathy says that everyone had to give up things to come here, and that Annie shouldn’t get any sympathy what she gave up to be in the house. Kathy says that Annie needs to go, as well as the other two Brendan and Rachel. Kathy says that we are all going to leave, we are all going to get kicked out, with that being said I hope she realizes that when she gets out that there’s somebody there for her. Monet says that she sees where she’s coming from, it’s hard. No one wants to be the first person out the door, and I think once she is she’ll realize that she does have someone to go back home that cares about her. Monet says that right now Annie just feels defeated, and in her eyes she feels that she has given up more to be here and from what I gather her family does not approve of her lifestyle choice and that’s a big issue. Kathy says that she doesn’t believe Annie’s story about production telling her she couldn’t talk about her girlfriend. Monet says that she doesn’t think production told her she couldn’t tell, because if they did 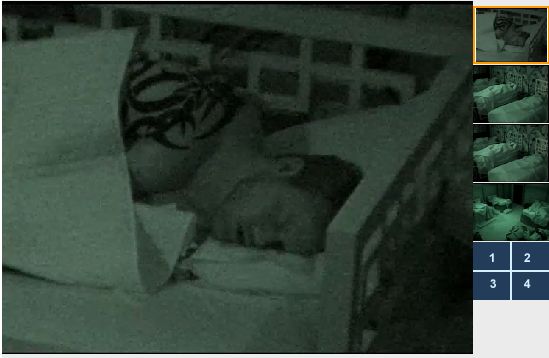 then why can she talk about it now? Kathy asks who knows what’s a lie or a truth in this house, everyone has the option to tell the truth or lie and some people are going to do the right thing, or the wrong thing. You have to face your own consequences. Kathy says that she hopes that Annie doesn’t go up there Thursday night and say things and will make a fool out of herself. Monet says I think she will. Kathy says Annie is unpredictable. Kathy says is self-destructing, or she’s a hell of an actor.

3am All the houseguests are asleep….

I’m confused… didn’t Lane just talk about having his tongue pierced yesterday or the day before? The vibrating one?

yes he said that yesterdau night

So why lie about that, of all things? Wierd.

I love Matt PJ’s. He is the best person in the house. He is soo chill!!

Kathie is a hell of an actor and so is Lane.

Will you take the rep?

offource!! anything to make her stop whining and bitching !!!

Hey Simon and Dawg, glad you two are back….

Hey Simon and Dawg, glad to see you guys back with your website.. what do you think of this season so far? predictions?

Personally I love this season so far. Usually it takes me 3 weeks to into the game but after the first 6 hours i was hooked. I’m shitty at predictions the only time I got it even remotely right was picking dick on season 8 . This year they have a house full of “smart” players. i’ll have a better idea in august. this first week feels like a month INSANE season.

im still not into this season,only watched the live feeds a couple of hours a day so far…..hope someone starts standing out soon….

how do you like the new format? using CHROME instead of REAL PLAYER?

hated !!! u cant go full screen !!!! (plus the side windown r always messed up not showing the right stuff)

really? i havent gotten it to play in any other browser just chrome must be doing something wrong

ya it should work with all of them unless your on a ipadd then you’re screwed.

i got firefox and chrome,same shit really

man my wife is gonna love that i found this site again, she was glued to it last year, hahaha

Glad you guys like the site.. this is a great BB year

btw i think kristen’s face looks like a freakin chimpmunk !!!!

I want to see the pajamas!!

hey is there a way to add a feature so what if i respond to a post and someone replies to my post or the thread i am posting to, to send an email that we provide?

ya i can try and add that tonight, thanks for the suggestion

hate Annie
hate the showmance already. they don’t even know each other yet

I suspect Hayden and Kristen are related somehow and not former boyfriend/girlfriend. They both have similar, unusual facial features predominantly around the mouth and eyes.