9:36pm Cabana Room Kahty and Kristen Kristen saying she was so close to winning that comp her hand was right near the buzzer she was so close. Kathy telling her that Rachel’s been saying you want the girls out so they have to get you out first. Kristen doesn’t want to go up to Rachel’s HOH room. Kathy tells her she has to, Kristen is better than Rachel, “don’t stoop to her level” Kathy tells her theres going to be 3 targets for Rachel it’ll be me you or hayden. One of us wins POV the other goes up and one goes home.. it’s pretty easy this week. you can hear brit screaming in the background (acting out) Kathy says that brit is sucking up big time with b/r, “her key will be the second pulled”. Kathy tells her b/r should of gone out last week, Why didn’t Matt put them up. Kristen get called into the DR “FINALLY!” Kathy “Let it all out”! 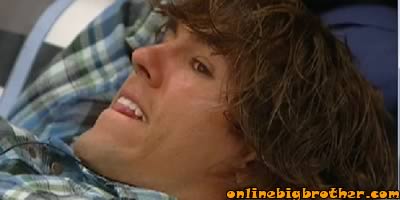 Hayden walks in says whats up Kath. Kathy is worried that her and Kristen are going up. Hayden tells her not to worry it’ll be Kristen and Hayden. Kathy tells him the target will be one of us three and thats the bottom line. Kathy “i refuse to make a deal with her period” Hayden agree on the targets this week. Lane now joins them.. Hayden “what up big dude”. Lane asks kathy hows she’s doing.. She’s alright a little stressed about this weeks nominations. Hayden says they should go play some pool or sit in the hottub. Lane “I could pass out right now” There all guessing that tomorrow will be luxury. 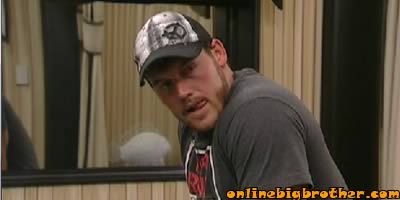 Matt walks in tells them he’s hearing pounding outside so he doubts they’ll be aloud out tonight.. he leaves. They start to briefly go over the POV possibilities.. Enzo now joins them eating some pop rocks.. “yo we don’t have these in jersey yo”.. Enz brings up that it’s tough in this house when people start fighting yo and both sides are your friends, Hayden and Enzo start to laugh saying “shits getting crazy up in here yo degrees are getting thrown in that argument”. Kathy brings up how light headed she got after going so long without a cigerette. Enzo thought lane was going to win HOH, “at first how she reacted i thought she lost yo i’m not any good at those questions I didn’t even have a chance yo”.. the four of them go over the order that people went out during the hOH… feeds cut when we come back they are talking about Andrew’s speech how he said hayden is going to dump enzo in final 4 and how they think enzo is stupid. 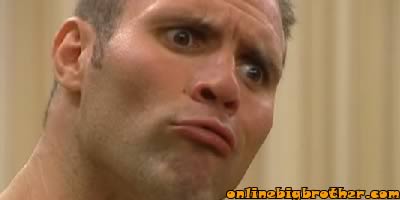 Kristen and MAtt come in she tells them her DR went great.. Matt tells Kristen what Andrew did was bullshit he shouldn’t of gone out like that. Hayden says he feels like a have nots right now so maybe he’ll sleep in there. Enzo “well he knew he was going home thats one thing he was right about.. he’s eating a kaiser, got a big bag of weed he’s rolled up a giant blunt and he’s jerking off watching ESPN.. but it’s kosher weed has pickles in it” …”he’s going to finger blast someone in the airport cause now he’s got notoriety.. they’ll want to see if his pickle is kosher” .. Mat, Enzo leave.

10:12 Jumanji Lane, Matt and Enzo Talking about how awesome it is that the brigade is still a secret yo. Enzo is having trouble trying to find a place to sleep. ragan comes in. Enzo “I’m the founder of the jumanji jam session and the jumanji name I should pick a spot to sleep” Enzo’s telling them he thinks that Annie and Andrew were the friends in the house because they were both loose cannons and from Florida.

Onlinebigbrother.com is around because of your donation every year the site costs us to host the images and run the servers needed to handle the traffic. If you like the site then please consider donating to keep the madness going. Thanks!

weed that was grown and broken up by a rabbi?

or marijuana blessed by a rabbi

Enzo and Brit are my fave

BRITT IS MY FAV THEN RAGAN

That could be the ticket…Andrew was my #1 with Brite as #2… now that Capt Kosher is gone, Brite has moved up…the new #2 probably is Raygun. No one else matters in my eye but Rachel has become more interesting now that shes won HOH again. When shes sober and not full of Brendons tongue shes a better than your average bear type of a player. She could be my new #2… heh heh ‘who does #2 work for???’

The Excitement
Reply to  Danna

me too, girl!
Meow Meow and the Beauty Queen. i wish Britney had a good nickname. someone come up with one!

Systemfailure
Reply to  The Excitement

My nickname for Brit is CoolWhip b/c she is smooth with her shit talk and can trash talk with the best of them.

you got that right

Yeah, Enzo and Britney are my favourites too. I also like Lane a lot though too. He’s pretty cool and funny.

I agree big time, BBGrandma. None of these HGs have had any lessons in table manners. I thought Michelle (last year) was the worst for chewing with her mouth open, but all of these people are oblivious to how the microphones amplify their smacking their mouths, eating with their mouths open, chewing ice (Lane). I have muted them during BBAD every night when I see them even going near the kitchen.

sad thing is…andrew is a nice guy, who told the truth in the end….they dont believe him now, but should apologize for these type of statements when its all over…leave his religion out of it, and I am not remotely religious…its just petty

they shoud bring Andrew back

You know what…………..I’m campaining for the most boring to least to get evicted every week. I don’t care if i like them or not! If your not gonna give us drama then ur azz got to go YO! SIMPLE AS THAT!

lol grandma! bb is to boring you know! so i figure if i like them or not they have to go. It’s tv for god sake. im watching now the pity party on bbad.

The both were doing the same thing.There all fake. the whole house

Yeah i know. they both were going at it!

She wanted to do more, too.

Rachel was acting like a Queen mad that her subjects weren’t bowing down to her. She has the power so just calm down!

thats why people who sees through her BS hates her it has nothing to do with her winning thats good, but acting all cocky and bullying people to vote their way that just wrong, but soon as they don’t have power it’s kissing HOHs ass and being scared….

I hope the whole week is a good old fashioned cat fight for a nice change of pace. Will start BBAD now to record. Time for something new.

im really hoping something happens that will make it so nobody wins, give the $550,000 to charity

Pandora’s box. Ho hum. It sucked last year, and I guess they are so desperate to save the season that they couldn’t come up with anything better than to repeat two failed twists. Boring.

I am with Kathy, “I’m sick of hearing about past seasons.” Make your own!

THERE TO BORING TO. KATHY NEEDS 2 STOP DIGGIN HER OWN GRAVE. BY SUNDAY SHE WILL TURN ON KRISTEN. WHICH WILL BE SMART ,TO SAVE HER AZZ

I don’t like Kathy either! Her voice and she is a floater!

Rachel was looking pretty Vegas tonight – give her some credit. Her laugh still suck though, and she did have pants on. Lets have something NEW to watch!!!!!

lol Rachel at the HOH door “Is this everybody? Oh yeah, after this week it will be.”

hahaha. kristen is a bitter baby! its like she is giving up.

she pissed at what happened and she know rachel is sending her home, thats what rachel said a few days ago if she won… id be pissed to i don;t wanna hang out with someone im at odds with

I don’t think she was mean to Andrew anymore than anyone else. She even told Hayden that she thought she might give him a vote so he would have one. Hayden told her not to. Brendon, his so called best friend didn’t! When Andrew attacked her on CBS she wasn’t about to vote for him.

just because every 1 else was mean that dont mean she had to. she was more mean because he thought she was her friend. brendon is a douche. But she flip floped on andrew, rachel, and next will be kathy. she has a right to be mad. But i love the karma! I hope she wins pov. then rachel put another member of the brigade up

I am not going to let you keep that up. She was not after Andrew. He got in her face and she did yell back at him. He started it with her. Andrew was starting it with everybody. He was losing his cool everyday.

me neither just saying she was pissed, but she deserves to feel that way

all cocky and happy now but wait til next week, they will be all whiny and scared and up the new HOHs ass just like last week…… what an uneventfully FAKE season, ill bete nobody from this season gets picked if they do another “All-Star”.

I got some sweet pics of that event.. there coming in the next post

hey simon has anybody in the house had sex? someone said the 2 “showmances” did

This year or of all time?

Oh I wish someone would muzzle Rachel. She’s nothing but a spoiled power mad little bitch behaving like a 12 year old.

Kristen and hayden got busted, it all true! then kristen gets mad because she got called out. Hayden is playing in 2 Alliances, he needs to cut his loses with kristen and go with the brigade. Kristen has said along she wanted to get rach/bren out, she has “played hayden like a fiddle”. Hayden is a good guy, I agree, but kinda of stupid, come on man, she has a Boy friend! Rachel needs to put up Kristen and Matt. Matt will stay and hayden plays on.

With the ” Pandora’s Box ” maybe bb well bring in Kristen’s boyfriend & let them have dinner together & play a game on ” WHO GET’S The CHEATER “. Oh, better yet ” set a nice candle light dinner table for Kristen’s boyfriend & set down Rachel in Kristen’s chair & get her come on to him & keep the camera’s on them so Brandon can watch how she play’s men !!! Let him watch from thr HOH room with everyone in there ! Wonder if Rachel would try & come on to him !!!

Is it weird that Ragan got his PHD from Arizona during the same time possibly that Hayden was playing baseball there. But more interesting is that Ragan currently is an assistant professor at Californial State University/Long Beach where Brendon got his Masters Degree and is doing research.

Did anyone else notice that they have been talking about bringing someone else BACK into the house and that ANNIE and MONET have been sequestered, HOWEVER Julie told ANDREW about Matt’s wife and that she DID NOT have the bone disease, therefor ANDREW will NOT be the one coming back! That information would definatley destroy MATT!

I can’t stand Kristen. I hate the sound of her voice and just her period!