7:45am on the dot Big Brother cut the feeds to wake up the houseguests for the POV competition this morning! The feeds come back at 7:50am, all the cameras are on Ragan, Rachel, and Kathy up in the HOH room. Ragan is saying that he likens going from a have not to a have is like going from a non gay place to Hollywood were he just wants to eat all the gay people. They talk about how the have nots have it better this week because they get fish sticks. Ragan says that he hasn’t won anything yet and really wants to win something. Big Brother then asks Ragan are you wearing someone elses microphone? Ragan stands up, pulls off his mic and holds it up to the camera and wines NOOOOOOoooo… I’m not!! That’s rude! That’s just rude! Rachel and Kathy laugh. Big Brother then tells the houseguests “I SAID IT’S TIME TO GET UP FOR THE DAY!! Rachel says we’re the good ones big brother …we’re up! Rachel asks Ragan if he doesn’t get picked to play in the POV he can host it. Ragan says yeah okay. Rachel tells them that they can sleep up there all week if they want. Rachel says that she feels bad for Monet and Britney. Ragan says I think its sweet that you do …that you feel compassion for them .. but its also part of the game. 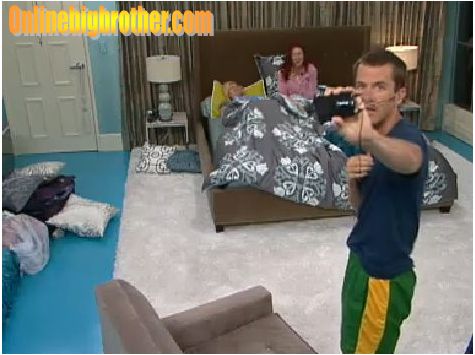 In the have not room Britney is talking to Matt about how it sucks they had to stay up so late and then get woken up so early for a competition. Matt says yeah… maybe it will be a napping competition. Britney says yeah that would be nice. 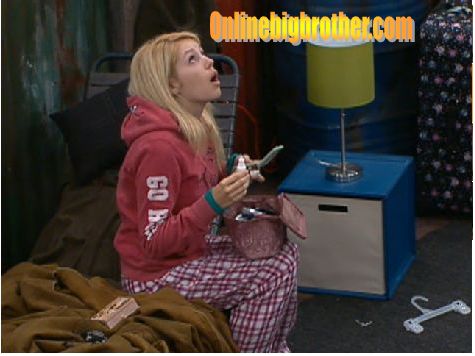 8am The camera switches back to the HOH room. They are recounting last season’s POV competitions, what happened when and who won. They think this one will be a temptation competition where they are tempted to give up things. Matt says that the have nots did not sleep well and are very grumpy this morning. Kathy says we didn’t do that when we were a have not. Kathy asks if they were saying anything. Matt says ..Uhmmm no. Matt then tell them that Britney was saying how grumpy she was in her diary room session at 2 in the morning. Matt starts talking about the diary and how it used to be dark when they would walk in and couldnt start talking until the red light came on … and the feeds cut out to the we will be right back screen.

Matt asks if the ceremony will be tomorrow.  Ragan says I think it will be Monday.  Rachel says that she thinks the nominations will stay the same.  Ragan says this game is so unpredictable.  They start talking about other POV competitions, counting ones, memory ones… etc.  Kathy says that she doesn’t want to go down there and get all the dirty looks.  Rachel and Kathy talk about how Monet thinks Kathy was saying stuff about her.  Kathy says that she was trying to be there for Monet and Monet said that you just cant trust any one in this house.  They think that its Britney trying to play Monet and start stuff by telling her things that aren’t true.  Rachel says that she thinks the person that leaves this week will create there own reason for leaving by causing drama.

8:35am They talk about how Monet already has $10,000 in her pocket, and that that is a lot of money.  Rachel tells Kathy that when she told Monet that she was probably going up all Monet said was if you don’t put me up I wont come after you.  Rachel laughs and says yeah right. The feeds cut out and when they come back … Rachel says its so amazing who would have thought I would have met him on Big Brother.  Kathy says yeah.  Rachel says I am sorry about Monet being mean to you.  Kathy says I know… and they make fun of Kristen too.  Kathy says that we they are mean and say things like that to people she gets up and leaves … that its just immaturity.  Kathy says Monet is going to be a tough competitor.  Rachel says yeah that’s why I don’t feel bad about getting her out now.  Kathy thinks that Monet is just upset about not getting to eat. They start talking about the have not competition.

Down in the kitchen Monet, Ragan, and Britney are talking.  Monet eating the have not fruit cake for breakfast.  Britney says that knowing that Annie was the saboteur puts everything into perspective…. ..that it all makes sense now.  Britney says drama, drama, drama, drama ..ya know.   Ragan explains to Monet how she should make the slop.

8:40am – 9am In the bedroom, Hayden, Matt and Lane are talking.  Matt says that he really hopes he can play in the competition today.  Hayden says yeah we need to win.  Matt says I don’t think anyone will change the nominations, other than Britney and Monet.  Hayden says yeah I don’t think anyone would change the nominations; it would be stupid to do it.  Matt says that they have a 50% chance of one of the four of them to win HOH next week if one of them goes.  Those are pretty good odds.   Ragan joins them in the bedroom. Matt explains how he sleeps … he has a couple pillows over his head, then the blanket over the pillow and his legs are exposed.  Matt says the whole bottom half of me is exposed.  Ragan says yeah that’s how guys usually like me too.  They all laugh.  Ragan starts talking about his diary room session saying that its getting really boring. He impersonates the diary room and says “So fooood”  …and big brother cute the feeds to the we will be right back screen.

I’m convinced that Brendon has never had a girlfriend in his life. I laugh my ass off every time they show him kissing Rachel and talking to her. He is completely clueless or else he is one hell of an actor. I can’t believe those two actually think that they are the next Jeff and Jordan. I wish they would quit building the show around these two, but this isn’t exactly a house full of people that are interesting. Possibly the worst cast ever. Hopefully that will change, but I don’t see it happening. It’s going to be a boring season.

Yup- there gross that is for sure ! I wonder when Rachel’s hair will start to fall-out with all that stuff from the bottle ???, it’s caused her to be brain-dead.

Although “Giggles” hasn’t been my favorite, when she spoke to Brit & Money last night on BBAD she showed a very compassionate side that was engaging and compelling — and seemed REAL. When a male is in the room she puts on a different persona, the Betty Boop one that must work for her in Vegas.

If it was real, it was the only real thing she has shown so far. I think she is fake and just trying to keep the blood off her own hands.

Ok that’s it! I have officially had it with the Brenden and Rachel thing! If I have to watch them cuddle and praise each other anymore I am going to bite down on the cyanide capsule that I keep sewn in the collar of my pajama top. Brenden kisses her like he’s kissing his grandma. Brenden and his ” me me me, you hurt my feelings” crap is unbelievable! He almost comes across gay to me. Allright I’m cutting that capsule out now!

Jeff and Jordan were not half as annoying to me as Brenden and Rachel. Maybe it’s because you got to see their relationship develop normally over time not like these idiots going into full blown shakespearian love in four days! And I don’t ever recall any of my first kisses being like birds pecking at seed in a bird feeder!